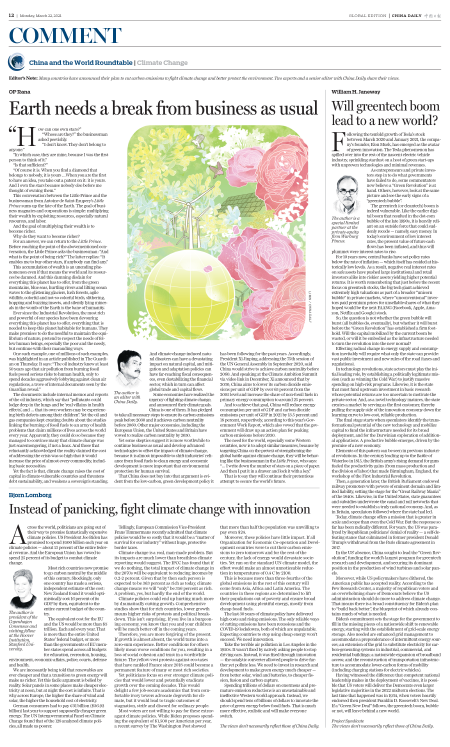 Editor’s Note: Many countries have announced plans to reduce carbon emissions to tackle climate change and better protect the environment. Two experts and an editor-in-chief of China Daily share their views.

“How can you own stars?”

“Who are they?” the businessman asked sullenly.

“I don’t know. They don’t belong to anyone.”

“In this case, they’re mine, because I was the first person to think about it.”

“Of course it is. When you find a diamond that doesn’t belong to anyone, it’s yours. When you’re the first to have an idea, you patent it: it’s yours. I own the stars because no one else before me thought of owning them. “

This conversation between the Little Prince and the businessman of the Little Prince of Antoine de Saint-Exupéry sums up the fate of the Earth. The goal of business and corporate tycoons is simple: to multiply their wealth by exploiting resources, especially natural resources, and labor.

And the purpose of multiplying their wealth is to get richer.

Why do they want to get richer?

This accumulation of wealth is a never-ending phenomenon even if it means that the world and its resources are damned. And that overwhelming disregard for everything this planet has to offer, from green mountains, blue seas, crashing rivers and singing ocean waves to glistening glaciers, lush forests, agile wildlife, colorful birds and not so colorful, slippery, hopping and buzzing silently insects and minerals in the Earth’s womb are the bane of humanity.

Since the Industrial Revolution, the richest and most powerful of our species have devoured all that this planet has to offer, all that is necessary to keep this planet habitable for humans. They promise to do whatever is necessary to maintain the balance of nature, pretend to respect the needs of other human beings, especially the poor and needy, but continue their marauding paths.

One such example, one of millions of such examples, was highlighted in an article published Thursday in The Guardian. He says: “The oil industry knew at least 50 years ago that air pollution from fossil fuel combustion posed serious risks to human health, only to spend decades aggressively lobbying against clean air regulations, reveal a wealth of internal documents viewed by the Guardian. “

The documents include internal memos and reports from the oil industry, which say “pollutants could lodge deep in the lungs and be” real bad guys to health, “and his own workers could be suffering from deformities. congenital in their children “. Yet oil and gas companies have continued to cast doubt on studies linking the burning of fossil fuels to an array of health problems that claim millions of lives around the world every year. Apparently, they were able to do this because they were able to convince many that climate change was just fear-mongering, if not a hoax. And those who reluctantly acknowledged the reality claimed that the cost of solving the crisis was so high that it would increase the price of almost every commodity, including basic necessities.

Yet the point is that climate change increases the cost of capital in climate-vulnerable countries, threatens debt sustainability, and weakens the position of a sovereign. And climate change-induced natural disasters can have a devastating impact on natural capital, and mitigation and adaptation policies can have far-reaching fiscal consequences or even destabilize the financial sector, which in turn can affect world trade and capital flows.

Some economies have realized the urgency of tackling climate change and have announced their climate targets. China is one of them. It has pledged to take all necessary measures to ensure its peak carbon emissions by 2030 and achieve carbon neutrality by 2060. Other major economies, notably the European Union, the United States and the Great Brittany, have committed to achieving carbon neutrality by 2050.

Still, some skeptics suggest that it is more worthwhile to carry on business as usual and develop advanced technologies to offset the impact of climate change, as it is nearly impossible to shift the dependence of the fossil fuel industries. towards clean energy and economic development is more important than protecting the environment. for human survival.

The fact that China does not buy into this argument is clear from the low-carbon green development policy it has pursued in recent years. As a result, President Xi Jinping, addressing the 75th session of the United Nations General Assembly in September 2020, said China will strive to achieve carbon neutrality by 2060. And speaking at the Climate Ambition summit via video link in December, Xi announced that by 2030, China aims to reduce its carbon dioxide emissions per unit of GDP by more than 65% from 2005 levels and increase the share of non-fossil fuels in primary energy consumption at about 25%.

The need for the world, especially some Western countries, now is to adopt similar measures, because by targeting China under the pretext of strengthening the global battle against climate change, they will behave like the businessman of the Small Prince, who says, “I write the number of stars on a piece of paper. Then I put it in a drawer and lock it with a key.”

That is, they will continue their pretentious attempt to secure the future of the world.