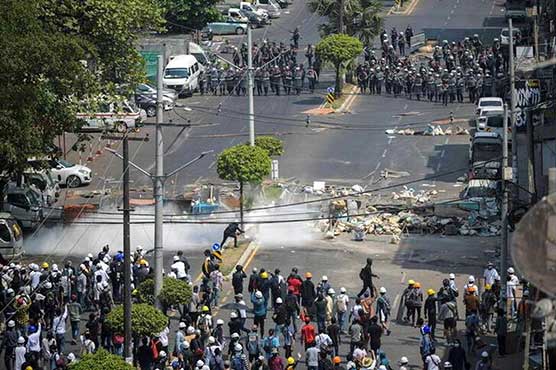 ISTANBUL (AFP) – President Recep Tayyip Erdogan is seeking to secure victory in the next election by trying “illegally” to ban Turkey’s pro-Kurdish party from prison, his former leader told AFP on Sunday.

The People’s Democratic Party (HDP) – the third largest group in parliament – has been under pressure for years over alleged links to Kurdish activists who have waged a deadly insurgency against the state since 1984.

Dozens of lawmakers and HDP leaders have been arrested and jailed on terrorism and other charges they deny and rights groups see as politically motivated.

Former HDP co-leader Selahattin Demirtas – twice Erdogan’s challenger in the presidential elections – has been behind bars since 2016 despite calls from the European Court of Human Rights for his release.

The party is now at risk of being shut down after Turkey’s top prosecutor accused it of links to Kurdish activists in a case filed Wednesday with the Constitutional Court.

“The main reason they are trying to shut down the HDP is to let the People’s Alliance win the next election,” now slated for 2023, Demirtas said in a written response to AFP questions.

He was referring to the electoral alliance between Erdogan’s ruling AKP and his ultra-nationalist junior partner, the MHP, which is slowly losing support in most opinion polls.

“This reason alone is enough to make the case (against the HDP) illegal and illegitimate,” he said from Edirne prison, in northwestern Turkey, where he is being held.

“I hope the Constitutional Court will not give credit to this irrational behavior and dismiss the case.”

The United States said it would “further undermine” democracy while the European Union warned that it “would violate the rights of millions of voters”.

In the past, Turkey has shut down other pro-Kurdish parties for alleged links with militants of the Kurdistan Workers’ Party (PKK) whose insurgency has left tens of thousands dead.

The PKK is recognized as a terrorist group by Ankara and its Western allies. The indictment before the Constitutional Court accuses the HDP of having “organic” links with the activists.

Demirtas dismissed the charges. “No matter what kind of obstacles get in our way, our politics will continue to grow,” he said. “The only thing I am sure is that we will not give up the right to democratic politics and governance.”

But he added in a self-critical note that the party should consider whether it was making political mistakes. “I mean regardless of the closure case we should review our own shortcomings through self-criticism,” he said. “We should explain ourselves better to society. We should do it whether (the party) is closed or not.”

Demirtas faces up to 142 years in prison if convicted of PKK links and other charges currently in court.

The indictment filed with the Constitutional Court last week accuses the HDP of being a threat to “the indivisible integrity of the state” and seeks to bar 687 party members – including Demirtas – from enlisting in politics for five years.

The bans appear to be aimed at ensuring that current members are unable to form a new party under a different name if the HDP closes.

Asked about his political future, Demirtas said he was already “de facto politically banned” because of his detention.

But “even if I am not a member of a political party or if I am not a candidate, I will continue to fight with the people, side by side,” he said.