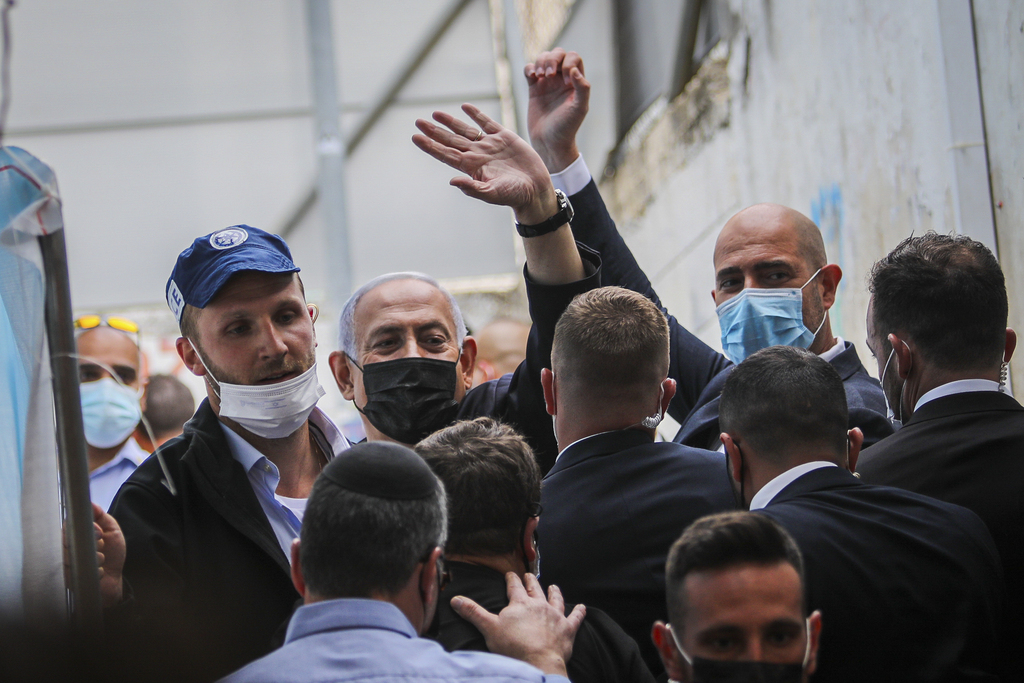 JERUSALEM The Israelis vote Tuesday in their fourth parliamentary election in just two years. Once again, the race comes down to a referendum on Prime Minister Benjamin Netanyahu.

Netanyahu, who has served as prime minister for the past 12 years, hopes voters reward him for successfully leading the rollout of the coronavirus vaccine in the country and his diplomatic outreach to the Arab world. His opponents have highlighted his past mistakes in tackling the virus, his ongoing corruption trial and his reliance on divisive religious and ultra-nationalist allies.

Over the years, Netanyahu has built a reputation as a political magician and master manipulator capable of surviving any crisis. While witnesses are expected to take a stand against him next month, Netanyahu is hoping for another miracle that could make a friendly parliament more willing to grant him immunity or freeze his trial. Opponents describe him as a serial liar who caused two years of political paralysis by putting his political survival and legal problems ahead of the country’s interests.

Opinion polls predict an extremely close race, raising the possibility of a continuing standoff and even an unprecedented fifth consecutive election. Netanyahu appears to hold a slight advantage due to the intricacies of the Israeli political system.

In Israel, people vote for parties, not for individual candidates. Netanyahu’s Likud is once again on the verge of becoming the largest individual party. But since no single party has ever won a 61-seat parliamentary majority on its own, political alliances must be formed to create a ruling coalition. If the opinion polls turned out to be correct, Netanyahu would have a clearer path to building a government than the array of rivals who have little in common beyond their animosity towards him.

Here’s a look at the key factors that could determine whether Netanyahu or one of his opponents can win that elusive 61-seat majority.

Netanyahu staked his hopes for re-election on the success of Israel’s successful vaccination campaign. Netanyahu last December acted swiftly and aggressively, personally pressuring the CEOs of Pfizer and Moderna to secure enough vaccines for Israel’s 9.3 million people. In less than three months, Israel vaccinated around 80% of its adult population. With infection rates falling, this allowed the country to reopen schools, restaurants, museums and the main airport just in time for election day. Netanyahu likes to say that Israel, which has long touted itself as the “nation of start-ups” due to its high-tech sector, has become the “nation of vaccines.”

Opponents have accused Netanyahu of screwing up the handling of the pandemic over the past year. A series of lockdowns have hit the economy hard, thousands of businesses have gone bankrupt and unemployment remains in double digits. Many also have bitter memories of Netanyahu’s ultra-Orthodox allies flouting lockdown rules and reporting the country’s more than 6,000 dead to COVID-19.

As the economy returns to life, Netanyahu hopes the growing sense of normalcy will make voters forget the hardships of the past year. This may explain that while the polls show that a majority of Israelis want Netanyahu’s replacement, he is also considered to be in the best position to be prime minister.

“In the minds of people, first and foremost when you run for an election, there is the identity of the Prime Minister,” said Yohanan Plesner, president of the Israel Democracy Institute. “In many ways, it works in Netanyahu’s favor because you don’t know who the opponent is.”

Should I stay or should I go?

Opinion polls indicate that around 15% of voters remain undecided. Tuesday’s election will depend not only on who these voters support, but whether they choose to vote at all.

Analysts expect the turnout to fall below the 71% level in the last election a year ago, in part due to lingering concerns about the coronavirus and general voter fatigue. Israel is providing special accommodation, including separate voting booths and mobile polling stations, to allow sick or quarantined people to vote.

But voter turnout in key sectors will be more important than overall turnout. Netanyahu’s religious and nationalist allies tend to have highly motivated voters. Arab voters, disappointed by the disintegration of the Arab bloc from the “common list”, are expected to stay at home in greater numbers this time around. Voters in the more liberal and secular regions around Tel Aviv also tend to have lower turnout. Netanyahu could benefit if these trends materialize.

This election could well be based on the presentation of a few small parties. To enter the Knesset, or parliament, a party must garner at least 3.25 percent of the vote, which gives it a minimum of four seats in the 120-seat body.

Pollster Camil Fuchs said four small parties were hovering near the threshold. Among these, the accommodating Meretz Party and centrist Blue and White are “much more in danger” of not getting enough support, according to recent polls, he said. Both are opposed to Netanyahu.

The religious Zionist party, a small pro-Netanyahu faction that includes openly racist and homophobic candidates, appears to be gaining strength. If one of the anti-Netanyahu parties fails to enter, a strong demonstration by Zionist clerics has placed Netanyahu at the top.

Despite the close race, neither Netanyahu and his religious and extremist allies, nor the anti-Netanyahu bloc, led by Yair Lapid’s centrist Yesh Atid party, are expected to win the majority of seats on their own.

This sets the stage for Netanyahu’s former aide Naftali Bennett to become the decisive voice in coalition building. Bennett’s Yamina Party supports the same hard-line ideology as Likud. But the two have a notoriously strained relationship, and Bennett has refused to commit to either side.

Given their similar worldviews, Bennett, who served as Netanyahu’s education and defense minister, appears to be more likely to join Netanyahu than the anti-Netanyahu bloc, which ranges from accommodating Arab parties to former allies. of Netanyahu who had bitter personal disagreements with him. Yet, if offered the chance to be prime minister, Bennett could side with Netanyahu’s opponents.

Some polls predict that the two sides will not form a coalition, even with Bennett’s backing. It could create the unlikely scenario of a small Islamic party led by Arab lawmaker Mansour Abbas as kingmaker – or simply force a fifth election.

In the previous three elections, Netanyahu has boasted of his close alliance with then-President Donald Trump, posting huge billboards on highways and skyscrapers showing the men together. With Joe Biden now occupying the White House, Netanyahu barely mentioned the new president, whose administration gave him a cool welcome.

Likewise, little mention was made of the Palestinians, reflecting the several-year freeze on substantive peace efforts. Biden said he would soon re-engage with the Palestinians. This could make it difficult for the next Israeli leader to ignore the issue or Biden.

Shared burden of a new vision for Asia-Pacific

‘Sheikh Mujibur Rahman, one of the greatest leaders of the subcontinent,’ said Prime Minister Modi