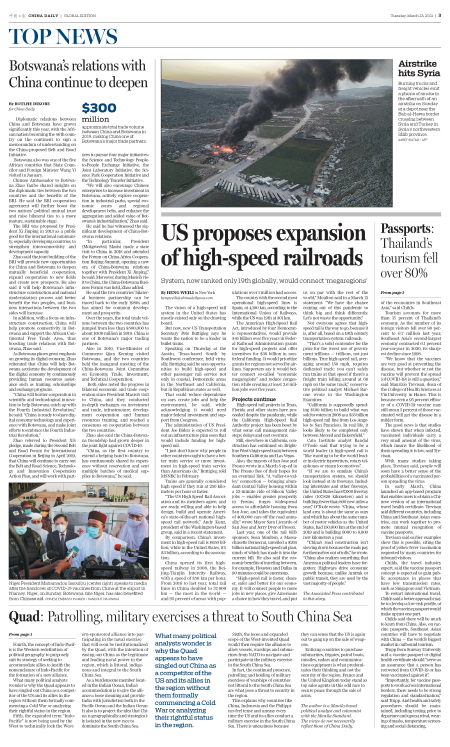 Diplomatic relations between China and Botswana have grown significantly this year, with the African nation becoming the 46th country on the continent to sign a memorandum of understanding on China’s proposed Belt and Road Initiative.

Botswana was also one of five African countries that State Councilor and Foreign Minister Wang Yi visited in January.

The BRI was proposed by President Xi Jinping in 2013 as a public good for the international community, especially developing countries, to strengthen interconnectivity and capacity for development.

Zhao said that the joint construction of the BRI will provide new opportunities for China and Botswana to deepen mutually beneficial cooperation, expand cooperation to new areas and create new perspectives. He also said that it will help Botswana’s infrastructure building and national modernization process and benefit both peoples better, and trade interactions between the two sides will increase.

As Botswana attaches great importance to the growth of its digital economy, Zhao reaffirmed that China will help Botswana to accelerate the development of the digital economy by continuously providing human resource assistance such as trainings, scholarships and exchange programs.

“China will strengthen cooperation in scientific and technological innovation to help Botswana catch up with the fourth industrial revolution,” he said. “China is ready to share the technology and experience of the digital economy with Botswana, and to make joint efforts to embrace the Fourth Industrial Revolution.”

Zhao referred to President Xi’s pledge, made at the Second Belt and Road Forum for International Cooperation in Beijing in April 2019, that China will continue to implement the Cooperation Action Plan in Belt and Road science, technology and innovation, and will work with its partners to pursue four major initiatives: the People-to-People Scientific and Technological Exchange Initiative, the Joint Laboratories Initiative, the the science parks cooperation initiative and the technology transfer initiative.

“We will also encourage Chinese enterprises to increase their investment in Botswana, actively explore cooperation in industrial parks, special economic zones and regional development belts, and improve the aggregation and added value of industrialization of the Botswana, ”Zhao said.

He said he had witnessed the significant development of Sino-Botswana relations.

In particular, President (Mokgweetsi) Masisi paid a state visit to China in 2018 and participated in the China-Africa Cooperation Forum at the Beijing Summit, ushering in a new era of Sino-Botswana relations with President Xi Jinping, ”he said. In addition, during Masisi’s visit to China, the China-Botswana Business Forum was held, Zhao added.

He said the two countries’ bilateral trade partnership dates back to the early 1980s and is aimed at common development and prosperity.

Over the years, the total volume of trade between the two countries has grown from less than $ 500,000 to around $ 300 million in 2019. China is one of Botswana’s major trading partners.

Also in 2019, Vice Minister of Commerce Qian Keming visited Botswana and the two countries held the inaugural meeting of the China-Botswana Joint Committee on Economy, Trade, Investment and Technical Cooperation.

The two sides noted the progress of bilateral economic and trade cooperation since President Masisi’s visit to China, held in-depth discussions on investment and trade, infrastructure, development cooperation and human resource training, and reached a consensus on cooperation between the two countries.

Zhao also said the China-Botswana friendship has deepened in the joint fight against COVID-19.

“China, as the first country to reach out to Botswana, has continuously shared its experience wholeheartedly and sent several batches of medical supplies to Botswana,” he said.