BEIJING – As the Chinese government discusses raising the retirement age to offset the economic impact of an aging population, it faces pushback from a large sample of the population, reflecting its unique family dynamic that entrusts often the responsibility of childcare to retired grandparents.

The retirement age for employees in the public sector and public enterprises is set at 60 for men, 55 for office workers and 50 for women workers. This has remained unchanged from around the time of the founding of the People’s Republic of China in 1949, even as life expectancy rose to over 80 years in urban areas.

The government’s work report presented to the National People’s Congress in March indicated that “the legal retirement age will be gradually raised” as part of the new five-year plan from 2021 to 2025.

Beijing sees this as necessary to ease the strain on the social safety net and avoid a labor shortage that could delay it in its power struggle with Washington. But resistance is strong from young graduates concerned about the impact on their career prospects as well as grandparents expected to care for their grandchildren after retirement.

China’s now abandoned one-child policy has accelerated the aging trend. The working-age population – those aged 15 to 64 – peaked in 2013, and United Nations data estimates that the share of this group in the total population will fall below that of the United States in 2045.

But the effects will be felt before that. The older men of the baby boom generation that began in 1962, after the great leap forward and the famine that followed, will begin to reach the legal retirement age next year. The share of the population aged 60 and over is expected to exceed 20% over the next five years.

The Chinese Academy of Social Sciences, a state-affiliated think tank, estimates that the urban employee pension fund will run out in 2035. 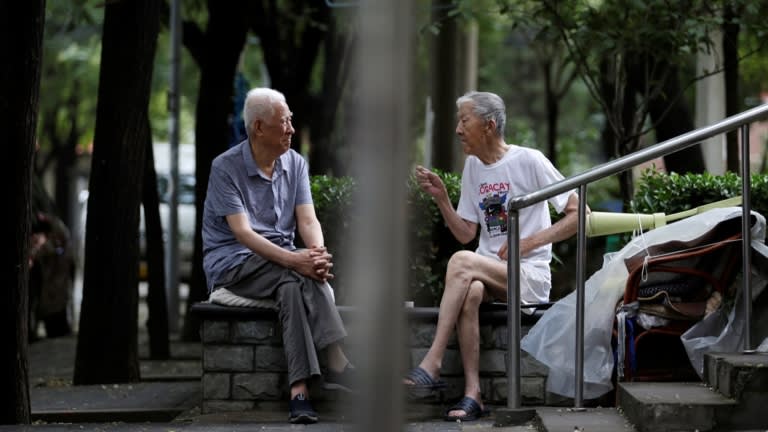 The share of the Chinese population aged 60 and over is on track to reach 20% within five years. © Reuters

Beijing’s five-year plans have already addressed the issue of retirement age. The plan for 2011-2015 called for considering flexibly increasing the age at which people can start receiving retirement benefits.

The next plan, which unfolded last year, aimed to move from study to action, stating that China “will implement policies to gradually increase the retirement age.” But almost no progress has been made.

A proposal has been made to increase the age by a few months each year, although the details have yet to be worked out. The government is also planning to raise the pension eligibility age at the same time.

“If older employees continue to work, it takes away a lot more job opportunities for young people,” said a worried 24-year-old who attended graduate school in Beijing.

New graduates are already struggling to find work, an issue that predates the disruption caused by the coronavirus. A 2018 study by the Meituan delivery app found that around 15% of its drivers had at least a bachelor’s degree.

The enrollment rate in higher education, which includes students from universities and vocational schools, rose to 54% in 2020 from 27% ten years earlier. But even as the growing ranks of highly skilled talent increase the demand for white collar jobs, the supply has not grown to match. There are fears that raising the retirement age will further narrow the scope. A graduation ceremony at Tsinghua University in June 2020: University enrollment rates have increased significantly, but new graduates are struggling to find work. © Reuters

Opposition is even more intense among middle-aged workers, who fear ending up paying higher insurance premiums for longer, while receiving lower total retirement benefits. The government will consider a system to top up payments based on years of employment, but it has had little success in moving public opinion.

The tension of self-sufficiency that runs through the modern view of the family – especially childcare – is also an obstacle.

“I want to quit my job at 55 and spend my free time looking after my grandchildren,” said a 54-year-old municipal government employee in Hunan Province.

Urban two-parent households typically need both parents to work to cover the high cost of housing and education, and public child care and early education services have grown more slowly than the economy as a whole. .

A 2017 study by a research team from Ritsumeikan University of Japan found that 88% of families in Shanghai depend to some extent on grandparents to help raise their children. Many older people worry about who will take their grandchildren to school and back if they cannot retire as planned.

The Chinese public is usually not particularly involved in politics, but people are very sensitive to issues that directly affect their lives and economic interests. President Xi Jinping’s government cannot afford to ignore the country’s rapidly growing elderly population.

Experts warn against pressure from Pak PM for EVMs

CHANCES AND END: Battle of the Trump statue and other quirky offerings