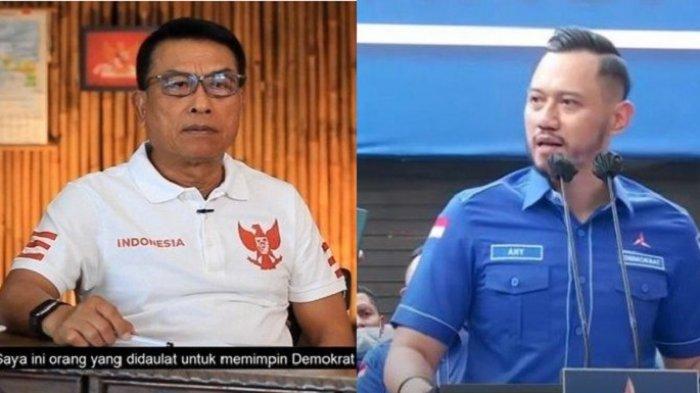 TRIBUNNEWS.COM, JAKARTA – The secretary general of the Galang Progress Center, which is one of Joko Widodo’s voluntary organizations, Diddy Budiono, examined the accusation that the head of the Presidential Office (KSP) Moeldoko transferred government power when the Extraordinary Congress (KLB ) of the Democratic Party in Deli Serdang turned out to be false.

“The decision of the Ministry of Law and Human Rights (Kemenkumham) refusing to ratify the Deli Serdang KLB proves that so far Moeldoko has been slandered by accusing the government of being behind Moeldoko in the Deli Serdang KLB and all the internal chaos of the Democrats. Party, ”he declared in his press release on Sunday (4/4/2021).

“Let’s use a smart, clean and polite political manner, not the other way around,” Diddy added.

This would be in response to the decision of Minister of Law and Human Rights Yasonna H Laoly who rejected the management of the Democratic Party following the Deli Serdang KLB.

“Menkumham Yasonna’s decision confirms that the government did not intervene at all, let alone set up an agency in the Deli Serdang KLB which ordered Moeldoko as general chairman,” he explained.

Also read: Democrats Kubu AHY: Moeldoko gang must apologize to the people and the president

According to Diddy, President Joko Widodo will never interfere in the internal affairs of any political party.

“Obviously from the start the palace has never commented on or reacted at all to the events of the Democratic Party epidemic and today it is proven that the baseless accusations that have dragged out the palace are not true “, did he declare.

As is known, the government through the Ministry of Law and Human Rights rejected the request for the ratification of the results of the KLB in Deli Serdang, in North Sumatra, which was held on March 5. 2021.

There is still some equipment that has not been assembled, including representatives of the DPD (District Leadership Council), DPC (Branch Leadership Council), not accompanied by the mandate of the head of DPC and DPC. So the government said that KLB Deli Serdang’s request for confirmation on March 5 was rejected, ”Yasonna said in her announcement on Wednesday (3/31/2021).

As everyone knows, the Democratic Party of Agus Harimurti Yudhoyono (AHY) has been asked to apologize to President Joko Widodo (Jokowi) for accusing the government of being involved in the coup attempt.

However, Camp AHY immediately reversed the request for an apology at Camp Moeldoko.

Herzaky pointed out that the Moeldoko camp caused noise in the public sphere with lies and slanderous accounts. So, according to him, there is no positive value that can be drawn from the behavior of the Moeldoko gang during these two months.

Basalt football rolls over Bears 38-7 in a 1v2 showdown