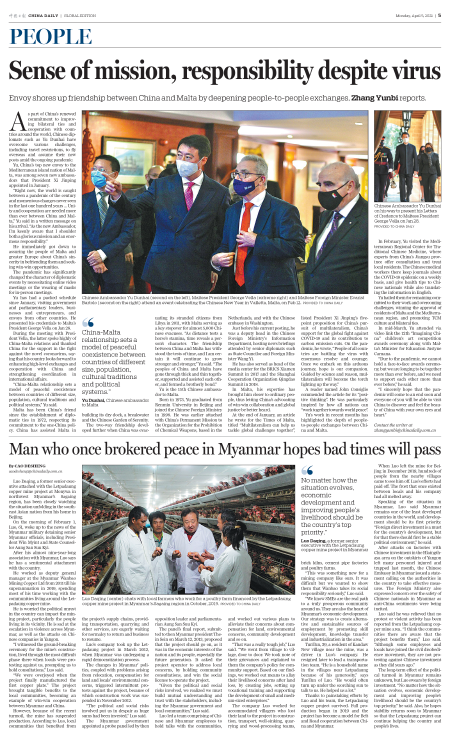 As part of China’s renewed commitment to improve bilateral relations and cooperation with countries around the world, Chinese diplomats such as Yu Dunhai have overcome various challenges, including travel restrictions, to fly to the abroad and assume their new positions in the midst of the ongoing pandemic.

“Right now the world is caught between a pandemic of the century and some memorable changes never seen in the past hundred years … Unity and cooperation are needed more than ever between China and Malta,” Yu said. in a written message upon his arrival. “As a new Ambassador, I am fully aware that I have both a glorious mission and an enormous responsibility.”

He immediately set about assuring the people of Malta and greater Europe of China’s sincerity in befriending them and seeking win-win opportunities.

The pandemic has dramatically changed the character of diplomatic events by requiring online video meetings or the wearing of masks for in-person meetings.

Yu has had a busy schedule since January, visiting government and parliamentary leaders, businesses and entrepreneurs, as well as envoys from other countries. He presented his credentials to Maltese President George Vella on January 28.

During the meeting with President Vella, the latter praised Sino-Maltese relations and thanked China for its support in the fight against the new coronavirus, saying his country looks forward to strengthening exchanges and cooperation. high-level with China and strengthen coordination in international affairs.

Malta has been a friend of China since the establishment of diplomatic relations in 1972, honoring its commitment to the one-China policy. China helped Malta to build its dry dock, a breakwater and the Chinese Garden of Serenity.

The mutual friendship grew further when China evacuated its stranded citizens from Libya in 2011, with Malta serving as a key stopover for nearly 5,000 Chinese evacuees. “While distance tests a horse’s endurance, time reveals a person’s character. The friendship between China and Malta has stood the test of time, and I am sure it will continue to grow stronger. more and more, “said Yu.” The people of China and Malta have gone through difficult times together, supported and helped each other and formed a brotherly bond. “

Yu is the 15th Chinese Ambassador to Malta.

Born in 1973, Yu graduated from Renmin University in Beijing and joined the Chinese Foreign Ministry in 1998. He was previously attached to the Permanent Mission of China to the Organization for the Prohibition of Chemical Weapons, based in the Netherlands, and at the Chinese Embassy in Washington. .

Just prior to his current assignment, he was deputy head of the Information Department of China’s Foreign Ministry, hosting press briefings attended by senior diplomats such as State Councilor and Foreign Minister Wang Yi.

He was also head of the media center for the BRICS Xiamen Summit in 2017 and the Shanghai Cooperation Organization Qingdao Summit in 2018.

In Malta, his expertise brought him closer to ordinary people, giving China a better hearing for the advocacy of win-win collaboration and global justice.

In late January, an article he wrote for The Times of Malta, titled “Multilateralism Can Help Us Address Global Challenges Together,” listed President Xi Jinping’s five-point proposal for China’s pursuit of multilateralism. , China’s support for the global fight against COVID. -19 and its contribution to reducing carbon emissions. On the pandemic, he wrote, “People in all countries are fighting the virus with tremendous determination and courage. Once we embark on this arduous journey, hope is our companion. Guided by science and reason, multilateralism will become the torch lighting the way. . “

A reader named John Consiglio praised the article for its “positive thinking”. He was particularly inspired by how all nations can “work together for world peace”.

Yu’s work over the past few months has highlighted the depth of the people-to-people exchanges between China and Malta. In February, Yu visited the Mediterranean Regional Center for Traditional Chinese Medicine, where experts from China’s Jiangsu Province provide consultations and treat local residents. Chinese medical workers there keep weekly newspapers on the COVID-19 outbreak and give health advice to Chinese nationals while also translating the information into English.

Yu commended them for staying engaged in their work and overcoming challenges, winning the approval of residents of Malta and the Mediterranean region, and promoting the culture of TCM and bilateral relations.

“Due to the pandemic, we cannot hold an awards ceremony in person, but we aspire more than ever to be together and we need to support each other more than ever,” he said.

“I sincerely hope that the pandemic will end soon and that each of you can visit China to experience and feel the beauty of China with your own eyes and heart.”

PM goes out every day to steal from people: Maryam

Trump campaign: defrauding elderly voters is only okay when we do