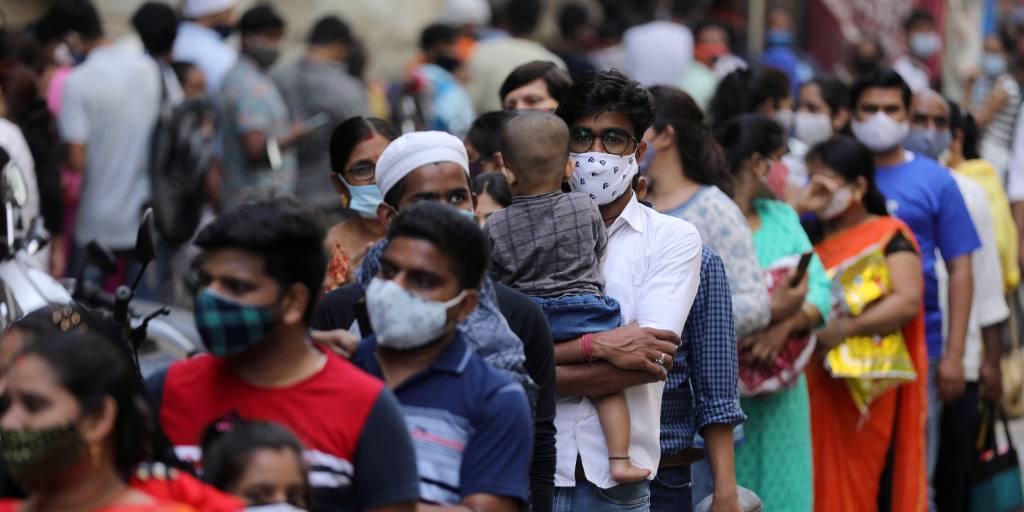 Nikkei Asia is following the spread of the coronavirus which was first detected in the city of Wuhan, in central China.

The cumulative global cases have reached 131,142,993, according to Johns Hopkins University in Baltimore. The worldwide death toll has reached 2,850,449 people.

For more information on the spread of COVID-19 and the progress of immunization around the world, please see our interactive charts and maps.

– State of vaccinations in the world

– Global map of the spread of mutated strains

Daily cases of COVID-19 in India are making their biggest jump ever, climbing to 103,558, according to data from the Ministry of Health, bringing the country’s total to 12.59 million. The 478 new deaths bring the number of deaths in the country to 165,101.

11:50 a.m. Johnson & Johnson has applied for an emergency authorization to use its single-injection vaccine in the Philippines, the country’s Food and Drug Administration chief said. The J&J documents, submitted Wednesday, are under review, FDA chief executive Rolando Enrique Domingo told reporters. J&J is the seventh COVID-19 vaccine maker to seek approval in the Philippines.

9:30 a.m. China is reporting 32 new cases for Sunday, up from 21 a day earlier and marking the highest daily total in more than two months. Of the new cases, 15 were local infections, all of which were reported in Yunnan province where a new cluster was found near the Myanmar border. The number of new asymptomatic cases, which China does not classify as confirmed cases, stood at 18, matching the previous day’s total.

8:50 a.m. Salvadoran President Nayib Bukele said China will donate 150,000 doses of Sinovac to the country, in addition to the 2 million doses of Sinovac his government has already purchased. “I received a letter from President Xi Jinping, in which he informs me that he will donate 150,000 COVID-19 vaccines to our country,” Bukele wrote on Twitter. El Salvador began its vaccination campaign with AstraZeneca vaccine in February In 2018, El Salvador severed ties with Taiwan during a visit to Beijing.

4 h 10 The United States administered more than 165 million doses of COVID-19 vaccines nationwide on Sunday morning and distributed nearly 208 million, according to the Centers for Disease Control and Prevention. The number of doses administered has increased by more than 3 million since Saturday.

The agency says 106.2 million people have received at least one dose, while 61.4 million are fully vaccinated. The CDC count includes the two-dose inoculations of Moderna and Pfizer / BioNTech as well as the single-dose vaccine from Johnson & Johnson.

9:11 p.m. India’s richest state Maharashtra is imposing strict restrictions on COVID-19 from Monday after a rapid rise in infections, a minister of state said. The state will close shopping malls, movie theaters, bars and restaurants from Monday night and impose a full lockdown on weekends, Nawab Malik told reporters after a cabinet meeting. People walk or stand on a crowded beach amid the spread of COVID-19 in Mumbai on April 4. Maharashtra, which includes Mumbai, is on the verge of imposing strict coronavirus measures. © Reuters

2:06 p.m. Leicester City center-back Caglar Soyuncu missed the team’s 2-0 Premier League loss to Manchester City on Saturday because he tested positive for COVID-19 while playing for Turkey in the 2022 World Cup qualifiers, manager Brendan Rodgers said. Soyuncu, who played Turkey’s 3-3 draw against Latvia on Tuesday, is isolated in Turkey. The 24-year-old has made 16 league appearances for Leicester this season.

22:26 Taiwan will receive its first batch of vaccines on Sunday under the WHO-led COVAX program, the island’s health minister said. Almost 200,000 doses of the AstraZeneca vaccine will be delivered.

7:30 p.m. Philippine President Rodrigo Duterte is extending a strict lockdown in the capital region and adjacent provinces for at least a week in an attempt to contain a new wave of coronavirus infections, his spokesman said on Saturday. The Philippines, which has the second highest number of COVID-19 cases and deaths in Southeast Asia, reported 12,576 new coronavirus infections on Saturday, putting additional strain on the health system.

3:20 p.m. Australia will continue its inoculation program with AstraZeneca, health officials said on Saturday, after a case of blood clotting raised concerns about the safety of the vaccine.

To keep up to date with previous developments, check out the latest edition of the latest updates.

Pray for NTT, this is Jokowi’s instruction on the Flores Flash Flood