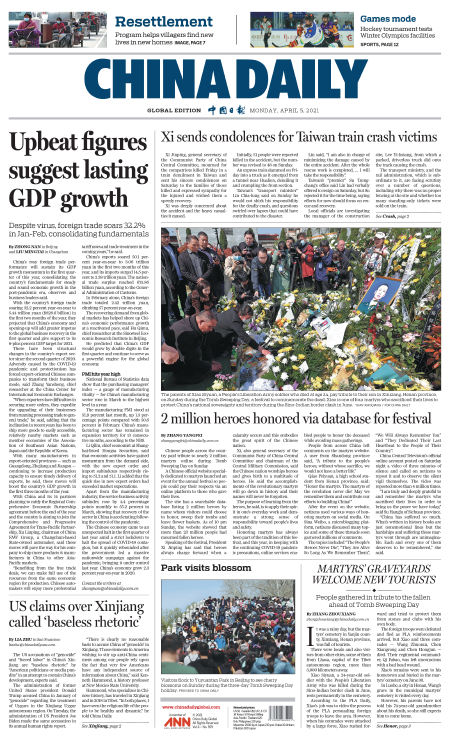 An official Chinese website specially dedicated to the martyrs has launched an event for the annual festival so that people can pay homage via an online platform to those who gave their lives.

The site has a searchable database of 2 million heroes by name that visitors could choose to honor, sweep their graves, and leave flower baskets. At 10 p.m. on Sunday, the website showed that more than 23 million people had mourned fallen heroes.

Speaking of the festival, President Xi Jinping said the heroes always charge forward when calamity occurs, which epitomizes the great spirit of the Chinese nation.

Xi, also general secretary of the Communist Party of China Central Committee and chairman of the Central Military Commission, said the Chinese nation adores heroes and gives birth to a multitude of heroes. He said the achievements of the revolutionary martyrs will go down in history and their names will never be forgotten.

The purpose of learning from heroes, he said, is to apply their spirit in his daily work and demonstrate a strong sense of responsibility for people’s lives and safety.

Honoring the martyrs has always been part of the tradition of this festival, and this year, in line with continued precautions against the COVID-19 pandemic, online services have made it possible for people to honor the deceased while avoiding mass gatherings.

People from all over China have left comments on the Martyrs’ website. A user from Shandong Province said, “A tribute to the heroes of the people, without whose sacrifice we would not have a better life.”

After the event on the website, netizens used various ways to honor the martyrs on social media. On Sina Weibo, a microblogging platform, netizens discussed many topics and some of these threads quickly garnered millions of comments.

Topics included “People’s heroes never die”, “They are alive as long as we remember them”, “We will always remember you” and “They dedicated their last heartbeat to the people of their country. “.

China Central Television’s official online account posted a three-minute video of silence on Saturday night and called on netizens to repost it and watch the silent vigil for themselves. The video has been reposted over 4 million times.

“I am truly and deeply grateful to the martyrs who sacrificed their lives to bring us the peace we know today and I remember them,” said Su Hanglu from Sichuan Province.

“China has suffered so much. What is written in the history books are just non-emotional lines, but the trials and sufferings these martyrs went through are unimaginable. Each of them deserves to be remembered.” , she said.