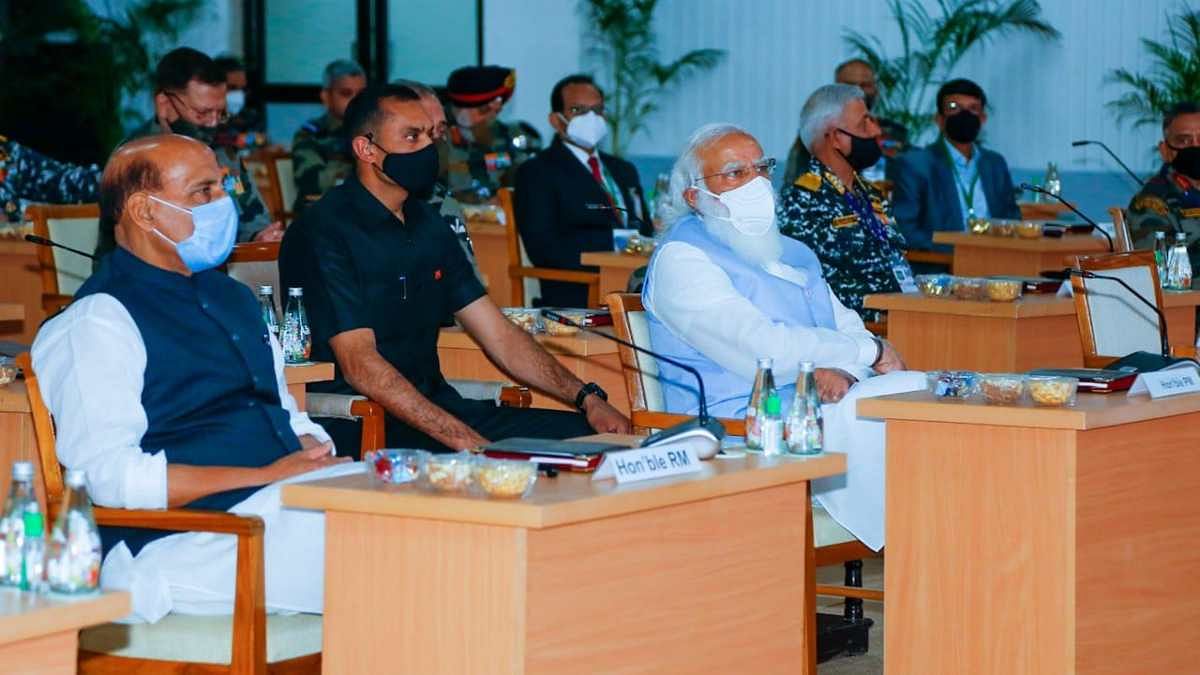 PMinister Narendra Modi is known to be not only a speaker but also someone who often throws a few surprises in his speeches, even shocks, depending on where you stand. His recent speech at the Combined Commanders’ Conference, the most vital annual meeting in terms of Indian defense, could fall into either category. Many wereoutragedbreaking away from the convention by inviting staff below the officer rank, while most others found aspects of its guidelines confusing, to say the least. But in the general discontent, there is one aspect which deserves attention and critical analysis Modisreference to an indigenous military doctrine.

Doctrines decide what you buy, produce or prioritize, it all comes down to choosing your best fighting foot. On one level, it’s simplicity itself; in another, it is the most complicated exercise in the world, because you have to think for yourself and not sit idly by on exotic language and catchy slogans used by other countries, all available on the Internet.

First of all, whatModisaid is only available as an officialSpecificthis underlined the importance of strengthening indigenization in the national security system, not only in the supply of equipment and weapons, but also in the doctrines, procedures and customs practiced in the armed forces. The reference in this article is only tothedoctrin, not the rest. The armed forces have more history and indigenization in their customs than any other government department. For example, thePunjab RegimentThe story of s describes the evolution of the Indian Army along with that of the nation itself. Doctrines are another matter, however, and are continually evolving even with the help of historical precepts.

The dictionary defines doctrine as teachings. Russia defines it as a system of officially adopted state views on the preparation of armed defense and armed protection of the Russian Federation. theNATO(North Atlantic Treaty Organization) defines it as the fundamental principles by which military forces guide their actions in support of objectives.Integrated Defense Staffdistills it as who we are, what we do and how we do in a basic and generic way.

In short, doctrine, at the strategic level, is the foundation for everything else.

Who we are, what we do a belief system

At a very basic level, who are we? Were a country that does not go out and attack others; most of the time. When we did, as in Sri Lanka, the consequences were disastrous and perhaps reinforced the principle of no attack. However, we act when we are goaded into our immediate neighborhood. There was Bangladesh in 1971 and the Maldives in 1988.

In both cases, the countries or individuals concerned requested it, reinforcing our image of ourselves as a big brother in South Asia. This image was linked to our memories of colonial history and the freedom movement, which underpinned a moral ancestry, where India was at times viewed with irritation as superior to the rest of the world.

In his bookMake India a Great, authorAparna pandewrites that the moral dimension of policy making has always been extremely important to the country. Today, this seems to be illustrated by the Vaccine Maitri where Indians provide vaccines to71 countries. But the dominant sentiment is not morality but pride in Indian strength and the shifting of Chinese influence into these countries. The same wording was evident in our opposition to China’s narrative in Ladak and the unprecedented strikes against Pakistan in 2019. Despite the stress on vasudhaiva kutumbakam (the worldisone family), India’s current belief system is based on a changing image of ourselves as the dominant power. It’s too short to tell if this is a permanent change or a short-term aberration. Suffice it to say that any new doctrine will have to decide which side of the line our belief systems are on for the foreseeable future.

Also read: Why military leaders are scratching their heads after the Modis commanders conference speech

Who are we values

Values ​​are how a nation defines itself and derives from its beliefs. Values ​​are at the heart of identity and are usually part of the constitution. This is why Russia respects its constitution, which implies that these values ​​are what it will fight for. American values ​​have always been vital to the self-identification of the United States. It’s at the bottom of all strategy papers, including Joe Biden’s administrationsInterim strategic direction on national security, which mentions values ​​25 times calling specifically for their defense.

Indias value systems are defined in ourConstitutionsPreamble, which defines us as an asocialist, secular, democratic republic. Our values ​​include a comprehensive range of freedoms of all kinds. But the Constitution mentions Hindujust four times. InArticle 25, it includes Sikhs, Buddhists and Jains in the Hindu term. But does this reflect our current values? Can the armed forces adopt an indigenous doctrine based on these new values? Probably not. If so, then this multireligious army must have the boot. It is that simple.

Geography and how we are

Who we are is also strongly defined by geography. To illustrate, the aggressive and preventive Israeli doctrines derive from the fact that it has a total area of ​​22,145 km2. India, with 3.287 million km2, is likely to think of itself very differently.

India has always been aware of its size in the subcontinent, and this, in turn, instigated its nuclear doctrine of NoFirst Use. When the doctrine was discussed in the National Security Advisory Council, its chairman was the brilliant K. Subrahmanyam. His objections to a doctrine of the first use were numerous; but one was that it was not in the character of the Indies. More than anyone else, he understood that an aggressive tone in politics simply would not withstand the test of credibility. That’s what size does. It makes you less aggressive, unless you are pushed.

The geography also includes our great 7,516 km coastline, which has hardly ever been a factor in war, since all of our threats from the Mongol era were land. This still holds, but with an important reservation. The greatest threat of all came from the trading company, the East India Company. It lasted a hundred years. No surprise therefore our reluctance to ride the Quad and an instinctive mistrust of strangers. Any doctrine must make this calculation. In defense, it’s land. On the sea, trade is important and its protection. But 77 years ago a German cruiserEmdenbombed the Madras coast, and Japanese plans made headway. So Quad matters. But don’t waste your resources on one hundred year incident.

How to rethink the realities

Learning from others is commendable, but it hinders clarifying our innate strengths and abilities. For example, reassess how the Himalayas have been the indiastral frontier for decades. Using it as an advantage could result in a series of airfields to quickly bring in men and equipment, while removing roads altogether. Let the enemy fight in the forests. Our advantage is to put our forces to work against a China with incredibly long logistics lines. This may be an oversimplification; but the point is to reflect with your history books. Also think about the limits in terms of what our defense budget will ever allow. Big plans need big purses. Stop the roads and devote more time to in-depth surveillance.

Finally, the Prime Minister’s Office can hardly blame the forces for persevering as best they could. After all, they have been working without any form of political orientation for years. It is the PMO that must get the ball rolling by deciding on a doctrinal document that examines all of the issues identified above, and more. Such mapping requires civilians, military and academics to sit together and decide in the simplest language of what India was and what it is now, what worked for us and of what went wrong. No, this is not a Vision Practice document with excellent English. It is a harsh reality. But like PM Modisays, you also need to look at the whole issue through a Made-in-India lens. He is right. Now go on.

The author is the former director of the Secretariat of the National Security Council. Opinions are personal.

Trump biographer says ex-president is in his Fat Elvis period, begs people to love him