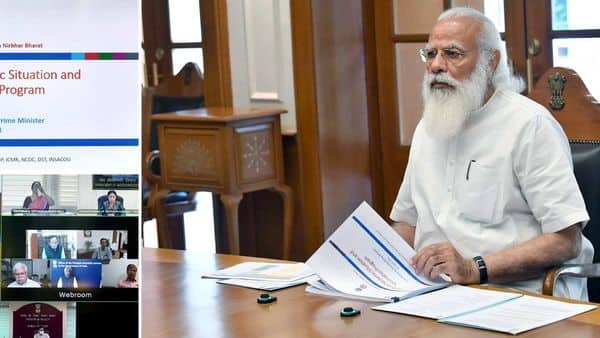 Prime Minister Narendra Modi will hold a meeting with key ministers from all states to take stock of the coronavirus situation in the country. PM Modi will also address issues related to vaccination against Covid-19.

The meeting on April 8 will be held by videoconference. PM Modi will discuss the latest wave of Covid-19 cases in several states.

8 states account for more than 81% of new Covid cases

Maharashtra, Karnataka, Chhattisgarh, Kerala and Punjab together account for 75.88% of the total active cases in the country. Maharashtra alone accounts for nearly 58.23% of the country’s total number of active cases, the ministry said.

The total number of active cases in India has reached 7,41830 and now accounts for 5.89% of the country’s total infections, according to the data.

The country’s daily infections have increased about 12 times since they hit a multi-month low in early February, when authorities relaxed most restrictions and people largely stopped wearing face masks and to move away from society.

With 103,558 new infections, the country has now reported 12.6 million cases, the highest after the United States and Brazil, according to data from the Department of Health. The death toll jumped by 478, still one of the lowest death rates in the world, bringing the total to 165,101.

India recorded the highest number of infections over the past week globally. More infectious variants of the virus may have played a role in the second outbreak, some epidemiologists say.

“The new variant, or the worrisome variants, probably explains a lot, rather than a simplistic explanation of the behavior,” said Rajib Dasgupta, director of the Center for Social Medicine and Community Health at Jawaharlal Nehru University in New Delhi.

India has found hundreds of cases of viral variants first detected in the UK, South Africa and Brazil.

With contributions from the agency

Trump and Melania cheered at Easter church service in Florida

Amazons Collide at Work: Days of Conflict and Control