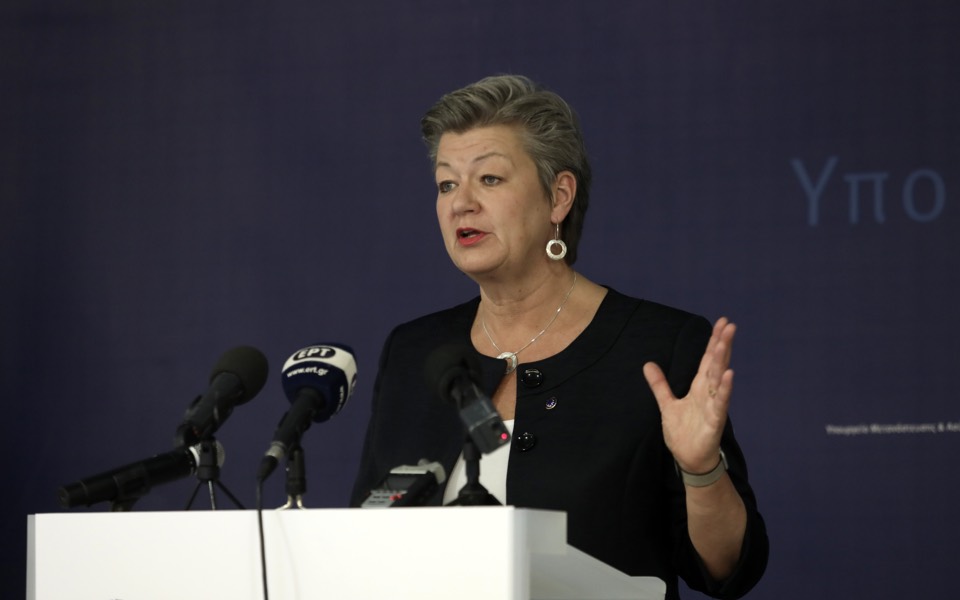 Ankara must honor its commitments under the 2016 migration agreement with the European Union, Home Affairs Commissioner Ylva Johansson said on Sunday in an exclusive interview with Kathimerini.

In addition, the Swedish European Commission official, who was in Greece last week for a two-day visit, reiterated his criticism of the leadership of the EU border agency Frontex, adding that the Greek government must also do more to investigate refoulement requests.

Johansson then described the Commission’s proposals for the New Pact on Migration and Asylum, which should help ease the pressure on countries of first entry, although she could not say whether a political consensus will be reached on such a sensitive issue.

Turkey must resume returns from Greece, Johansson stressed. I was very clear about this directly during my talks with the Minister of Foreign Affairs, Mr. [Mevlut] Cavusoglu, and also publicly. This is clearly part of the EU-Turkey statement, and I hope it will be part of the talks between the presidents [Ursula] von der Leyen and [Charles] Michel and president [Recep Tayyip] Erdogan, although that’s for the two presidents to decide. But both the prevention of departures and the resumption of reception of returnees are extremely important signals of Turkey’s willingness to comply with the declaration and to show goodwill for further discussions.

Johansson openly criticized the management by the executive director of Frontex, Fabrice Leggeris, of requests for refoulement at the Greek-Turkish border. A recent report by the Frontex board working group has been interpreted by some circles as a response refuting these allegations. Does Johansson agree with this interpretation? Does she think that Leggeri has done everything necessary to strengthen Frontex and protect the fundamental rights of asylum seekers?

These allegations were first reported in late October. I immediately called the executive director. I was late on a Friday evening and I asked him if Frontex had participated in push-backs, and he said no. I told him that in this case he should immediately clarify this because we could not afford this discussion. In the end, it was not until March that the matter was more or less clarified. There is a huge risk to the reputation of the agency because of this delay.

Is this a bad communication or a deeper problem?

In my opinion, it is clear from the report that there is a more serious problem. Report says there is no proper reporting system [of incidents concerning potential violations of fundamental rights]. He also says there is a need to create a new culture to fill in the gaps that have been noted. There was a significant delay in the deployment of their Fundamental Rights Officer, he only made the decision now. According to the regulations, there should have been 40 fundamental rights observers in place at the beginning of December and there are still none; there should have been three appointed deputy executive directors and there are still none. There is a huge risk that these delays in deployments and appointments have affected the effectiveness of clarifying such matters, the commissioner said.

Guarding the borders is no walk in the park, she added, admitting it shouldn’t come as a surprise that there may be reports you need to investigate. Especially when a third country with its own agenda is involved, you must be prepared to investigate them. Frontex’s board, she noted, puts a lot of pressure on the executive director, and that’s good, because he has a lot to work out.

Does it believe that the Greek authorities have done enough, on their part, to investigate similar allegations involving the Greek security forces?

We have had reports from the UNHCR which concern me greatly. This is something I raised with ministers during my visit, as I see the need to do more when it comes to investigating and clarifying these cases, Johansson said.

Asked about the progress of negotiations on the EU’s New Pact on Migration and Asylum and when an agreement can be expected, Johansson noted that progress has been made at the technical level, but the Council of EU foreign ministers had not been able to meet since last September. . You won’t see big moves from ministers in video conferences, she said, adding that the uncertainty over whether to resume face-to-face meetings means it is very difficult to predict how long it will take. it will take to reach an agreement.

Are there any guarantees that front-line countries, like Greece, will not have to take on the lion’s share again in the management of migrant flows?

In our proposal, relocation is not compulsory, but solidarity is. But Member States that are unwilling to participate in offshoring must take responsibility for returns. The aim is to find the right balance, to ensure that asylum seekers whose application for international protection is rejected are returned, but also that there is an appropriate system of solidarity and distribution. [across the EU] for people whose claims are accepted.

Another mechanism to relieve some of the pressure on first-entry countries concerns procedures for rapid screening of new arrivals to determine whether another Member State would be better suited to processing asylum applications.

For me, this is an important element to release some of the pressure on the countries of first entry, explained the Commissioner. She added that it is important that the criteria for transferring responsibility for transmitting an asylum application to another Member State include the presence in that Member State of family members from families created in transit, which s ‘would apply primarily to many Afghans who marry and have children in Iran before arriving in Europe. Current legislation does not cover these cases, it only covers families that already existed in the country of origin, Johansson explained.

In addition, she said, we will include siblings: if there is a brother or sister of the asylum seeker in another Member State, that Member State becomes responsible for processing the application. The same will apply if a Member State other than the country of first entry has issued a visa to the asylum seeker, or if he has worked or studied there.

One area on which all Member States seem to agree is the need to contain the flow of migrants who are not entitled to international protection and to increase the rate of return of those whose applications are refused. The faster you get a decision [in an asylum claim], the easier it is to fire people, Johansson noted. She also praised the Greeces Asylum Service for its much faster but also efficient asylum review processes over the past year, thanks to recent legislative changes.

At the same time, Johansson noted, attention is being paid to the external dimension to avoid irregular departures to Europe. We have proposed a stricter approach vis-à-vis third countries. We assessed 39 third countries in terms of their level of cooperation on readmission. For those who are very uncooperative, if their cooperation does not improve, I am ready to present proposals for restrictions in visa policy. As she explained, the vast majority of irregular arrivals these days are not refugees.

Ylva Johansson, who will travel to Greece again albeit remotely in May for the Delphi Economic Forum, stressed the need to build the new refugee reception and identification center in Lesvos as soon as possible. This is something that worries me a lot, that we must not have another rough winter with people in tents, she said, after visiting Lesvos and Samos on her trip to Greece and inspecting them. progress of two new camps under construction there.

I have received very encouraging messages from the whole Greek government, but especially from the Minister [Notis] Mitarakis. They assured that everything will be done to get the center ready on time, and I am confident that will happen, she said.

Another good message from Mitarakis was that no one who is currently [temporary] Mavrovouni camp will be on the island in winter, as all will have their candidacy assessed, and they will either have been relocated, to the mainland or other member states, or they will have been sent back, Johansson added.

Did she learn anything from her contacts on the Greek islands that she was not aware of before? I think I already had very good information about the fatigue of the inhabitants of the islands for six long years and their patience has limits. But it is always important to be on the ground, to meet people directly, to see with your own eyes, to have your own sense of the situation beyond mere information.