During certain summers, as Caribbean water temperatures rise, the luminous coral colonies of gold, green and blue that surround the island nation of Cuba give way to white skeletal plaques.

As Cuba’s marine life has suffered from overfishing and pollution, it is increasingly clear that warming waters due to climate change could also wreak havoc – both off the coast of the island. And in the world.

A study released Monday found that the total number of open water species declined by about half in 40 years through 2010 in tropical marine areas around the world. Meanwhile, sea surface temperatures in the tropics have risen by nearly 0.2 degrees Celsius.

“Climate change is already having an impact on the distribution of the diversity of marine species,” with the changes being more dramatic in the northern hemisphere where the waters have warmed more quickly, said study co-author Chhaya Chaudhary , biogeographer at Goethe University.

While many factors like overfishing have impacted tropical species, the study published in the Proceedings of the National Academy of Sciences found a strong correlation between the decline in species and the increase in temperature.

The diversity of fish species tended to stabilize or decline at or above 20 ° C (68 Fahrenheit), the researchers found. 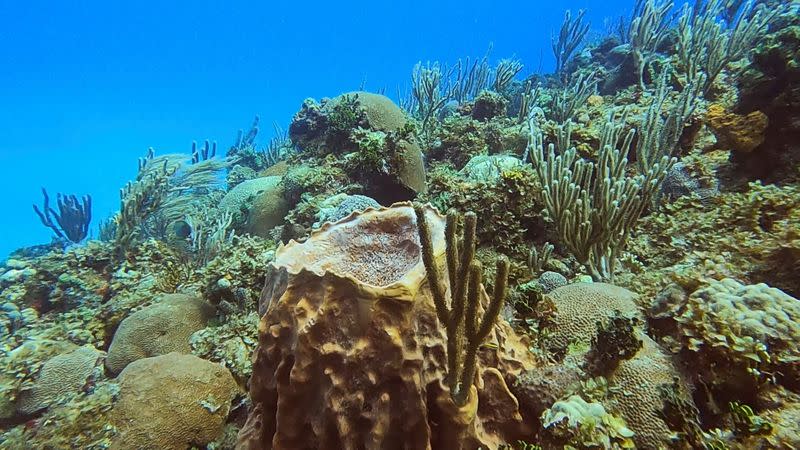 While previous studies have shown that warming oceans are causing some species to migrate to cooler waters, the new study attempts to assess this impact more broadly – by analyzing data on 48,661 marine species, including fish, molluscs, birds and corals since 1955.

The dataset is a 20% representative sample of all cited marine species in open water and living on the seabed – such as corals and sponges, the researchers said.

The number of species attached to the seabed remained somewhat stable in the tropics between the 1970s and 2010, according to the study. Some have also been found beyond the tropics, suggesting they had expanded their range.

In other words, scientists say, species that can move move.

“In geological history, this happened in the blink of an eye,” said Sebastian Ferse, an ecologist at the Leibniz Center for Tropical Marine Research who was not involved in the study. “To see such changes happening so quickly is something quite alarming.”

For stationary species like corals, movement is not an option.

One of the big questions is, ‘Will coral reefs as ecosystems and corals as species be able to move north or south quickly enough to adapt to a changing climate? “Said Ferse.

THE CORALS OF CUBA

The fact that fleets of fish and other swimmers move rapidly to more temperate waters could devastate the coral ecosystems they leave behind, as well as all the fishing and tourism industries that depend on them.

Such changes “can have a really huge impact on some of the most vulnerable human communities on the planet,” said Stuart Pimm, a conservation scientist at Duke University not involved in the study.

For Cuba, such an impact could wipe out the island nation’s efforts to manage its underwater gardens, although its corals have been less stressed from coastal development and pollution than corals elsewhere. They are considered to be more resistant to warming oceans.

“It’s impressive to return to an area that experienced significant bleaching the year before, but which appears to be in perfect health a year later,” said Daniel Whittle, who heads the Caribbean program at the Environmental Defense Fund. .

Cuba opened its first coral reef nursery four years ago to research which species have resisted the warming best and ultimately to repopulate the depleted reefs. The country is also in the process of restoring coastal mangroves, which serve as nurseries and fish shelters.

Chaudhary and his colleagues then plan to examine which tropical species were in decline or in migration.

The government is crushing the poor with inflation