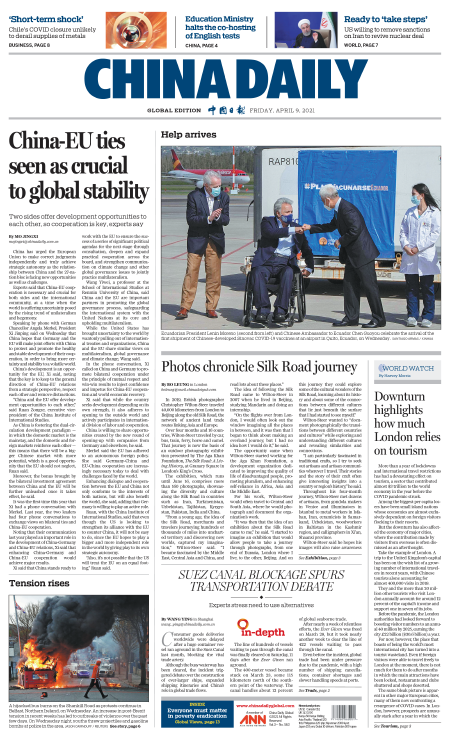 Both sides provide each other with development opportunities, so cooperation is essential

China urged the European Union to independently make correct judgments and truly achieve strategic autonomy, as the relationship between China and the 27-nation bloc faces new opportunities and challenges.

Experts said China-EU cooperation is necessary and crucial for both sides and the international community at a time when the world suffers from the uncertainty posed by the growing trend towards unilateralism and hegemony.

Speaking on the phone with German Chancellor Angela Merkel, President Xi Jinping said on Wednesday that China hopes that Germany and the EU will make joint efforts with China to protect and promote the healthy and stable development of their cooperation. , in order to bring more certainty and stability. in an unstable world.

“China and the EU provide each other with development opportunities,” said Ruan Zongze, executive vice president of the China Institute of International Studies.

As China encourages the dual circulation development paradigm of which the domestic market is the mainstay and the domestic and foreign markets reinforce each other, it means that there will be a larger Chinese market with more potential, which is a good opportunity that the EU should not overlook, said Ruan.

In addition, the bonus provided by the bilateral investment agreement between China and the EU will be released again once it enters into force, he said.

Xi said China is ready to work with the EU to ensure the success of a series of important political agendas for the next step through consultations, deepening and expanding practical cooperation to all levels and strengthen communication on climate change and other global governance issues to jointly practice multilateralism.

Wang Yiwei, professor at the School of International Studies at Renmin University of China, said that China and the EU are important partners in promoting the process of global governance, safeguarding the international system with the Nations United at the heart and the maintenance of multilateralism.

While the United States has created uncertainty around the world by voluntarily withdrawing from international treaties and organizations, China and the EU share similar views on multilateralism, global governance and climate change, said Wang.

During the telephone conversation, Xi called on China and Germany to promote bilateral cooperation on the principle of mutual respect and win-win results to instill confidence and momentum in China-EU cooperation and economic recovery. global.

Xi said that while the country pursues development according to its own strengths, it also adheres to openness to the outside world and actively participates in the international division of labor and cooperation.

China is ready to share the opportunities created by the new opening cycle with companies from Germany and beyond, he said.

Merkel said the EU has adhered to an autonomous foreign policy. She said that Germany-China and EU-China cooperation is increasingly needed today to face the challenges facing the world.

The strengthening of dialogue and cooperation between the EU and China is not only in line with the interests of the two countries, but will also benefit the world, she said, adding that Germany was ready to play an active role. .

Ruan, with the China Institute for International Studies, said that even if the United States seeks to strengthen its alliance with the EU to counter China, it will not be easy to do, as the EU hopes to play a greater and more independent role in the world by using its own strategic autonomy.

“Moreover, it is not possible for the United States to treat the EU on an equal footing,” Ruan said.