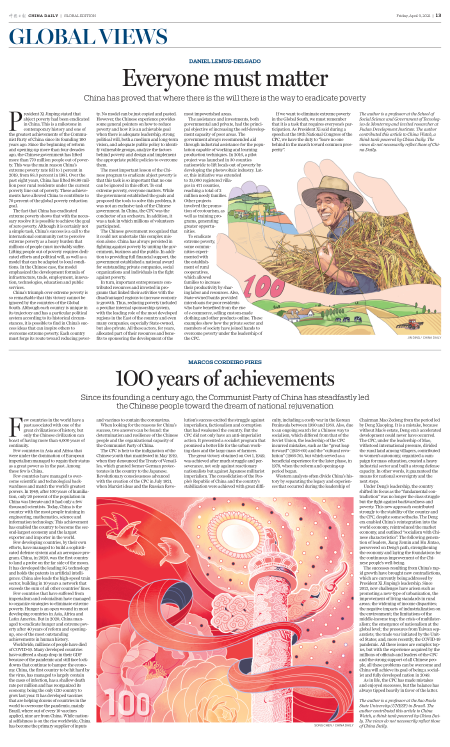 China has proven that where there is will, there is a way to eradicate poverty

President Xi Jinping said abject poverty has been eradicated in China. It is a milestone in contemporary history and one of the greatest achievements of the Chinese Communist Party since its founding 100 years ago. Since reform and opening-up began more than four decades ago, the Chinese government has lifted more than 770 million people out of poverty. This is the main reason why China’s extreme poverty rate fell to 1% in 2019, from 88.3% in 1981. In the past eight years, China has taken out 98.99 million rural people. poor from the current poverty line. These achievements have enabled China to contribute 70 percent of the global poverty reduction target.

The fact that China has eradicated extreme poverty shows that with the necessary determination it is possible to achieve the goal of zero poverty. While it is certainly no simple task, China’s success is a call to the international community not to perceive extreme poverty as a heavy burden that millions of people inevitably face. Lifting people out of poverty requires dedicated effort and political will, as well as a model that can be adapted to local conditions. In the Chinese case, the model emphasized the formula for developing infrastructure, trade, employment, innovation, technology, education and public services.

China’s triumph over extreme poverty is so remarkable that this victory cannot be ignored by the countries of the South. Although each country is unique in its trajectory and has a particular political system according to its historical circumstances, it is possible to find in China’s success ideas that can inspire others to overcome extreme poverty. Each country must chart its course towards poverty reduction. No model can be simply copied and pasted. However, the Chinese experience provides general indications on how to reduce poverty and how it is an achievable goal when there is adequate leadership, strong political will, medium and long term vision and adequate public policy. to identify vulnerable groups, analyze the factors of poverty and design and implement appropriate public policies to overcome them.

The most important lesson from China’s abject poverty eradication program is that this task is so important that no one can be ignored in this effort. When it comes to ending extreme poverty, everyone counts. While the government established the goals and offered the tools to solve this problem, it was not an exclusive task of the Chinese government. In China, the CPC was the conductor. Moreover, it was a task in which millions of volunteers participated.

The Chinese government has recognized that it cannot undertake this complex mission alone. China has always persisted in the fight against poverty by uniting government, business and the public. In addition to providing full financial support, the government has created a national award for private companies, social organizations and outstanding individuals in the fight against poverty.

In turn, important entrepreneurs have provided resources and invested in programs linking their activities to disadvantaged regions to increase economic growth. Thus, poverty reduction requires a special internal sponsorship system, with the leading role of the most developed regions in the east of the country and even of many companies, particularly public, but also private. All these actors, for years, have devoted part of their resources and profits to sponsoring the development of the poorest areas.

The main objective of assistance and investment, both government and private, was to increase the self-development capacity of poor regions. The government has always recommended aid through industrial assistance to the population capable of working and learning production techniques. In 2016, a pilot project was launched in 30 counties across the country to lift people out of poverty by developing the photovoltaic industry. Later, this initiative was extended to 35,000 registered villages in 471 counties, reaching a total of 2 million needy families. Other projects involved the promotion of ecotourism, as well as training programs, generating greater opportunities.

To eradicate extreme poverty, some communities have experimented with the creation of rural cooperatives, which has enabled families to increase their productivity by sharing work and resources. In addition, state-owned banks have provided microloans to poor residents who have benefited from the boom in e-commerce, selling tailor-made clothing and other products online. These examples show how the private sector and members of society joined forces to overcome poverty under the leadership of the CCP.

If we want to eradicate extreme poverty in the countries of the South, we must remember that this is a task that requires the participation of all. As President Xi said during a speech at the 19th CPC National Congress, we have a duty to “leave no one behind in the march towards common prosperity.”

The author is a professor at the School of Social Sciences and Government of Tecnologico de Monterrey and a visiting scholar at the Fudan Development Institute. The author contributed this article to China Watch, a think tank powered by China Daily.

Toxic elitism of declaring voters unworthy of the task