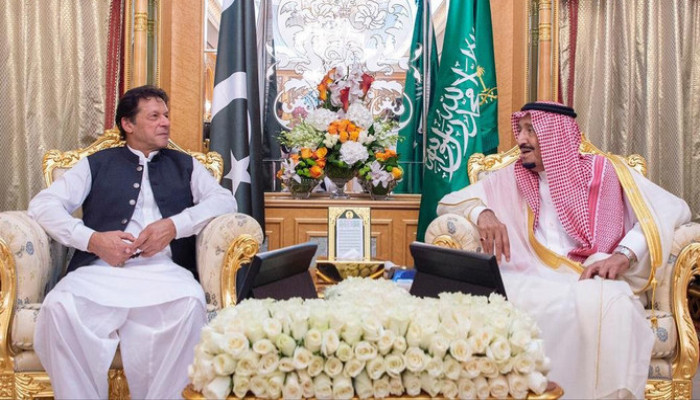 Pakistani Prime Minister Imran Khan speaks with Saudi King Salman bin Abdulazizon on September 19, 2019. Khan arrived in the Kingdom for a two-day official visit. (Photo courtesy of the Pakistan Consulate General in Jeddah) Prime Minister Imran Khan is due to visit Arabia Arabia early next month, May 7-9, the prime minister will visit the kingdom in invitation from Saudi Crown Prince Mohammed bin Salman. “Hundreds of Pakistani prisoners will return to their country,” said Pakistan’s ambassador to Saudi Arabia.

Prime Minister Imran Khan is due to visit Saudi Arabia early next month, May 7-9, where he will discuss the release of Pakistani prisoners languishing in jails.

According to a report published in Arab News, the prime minister will visit the kingdom at the invitation of Saudi Crown Prince Mohammed bin Salman.

Meanwhile, Pakistan’s new ambassador to Saudi Arabia Lt. Gen. (ret’d) Bilal Akbar, in an interview with Saudi media, said that memorandums of understanding in three areas would be signed during the visit of the first ministers.

He added that hundreds of prisoners will be released from prisons in Saudi Arabia and return to Pakistan.

This is not the first time that Prime Minister Imran has raised the issue of Pakistani prisoners languishing in Saudi prisons.

In February 2019, the Prime Minister asked the Saudi Crown Prince to release Pakistani prisoners from Saudi prisons during his visit to the country.

We are setting up a hotline at the embassy that will operate 24 hours a day, ”said the Pakistani ambassador, adding that the Pakistani community in Saudi Arabia can use the hotline to communicate issues and the problems she faces in the kingdom.

In addition, a community service program will be launched to address their concerns, added Lt Gen (retd) Bilal Akbar.

Confirming the Prime Minister’s visit, Foreign Ministry spokesman Zahid Hafeez Chaudhri at a weekly press briefing said: I can confirm that Prime Minister Imran Khan will undertake an official visit to the Kingdom of Saudi Arabia at the invitation of the Crown Prince of Saudi Arabia. , His Royal Highness Prince Mohammed bin Salman, early next month. “

The publication, citing sources, said that during the visit, the prime minister will meet with Crown Prince Mohammed bin Salman and other Saudi leaders.

“Many memoranda of understanding and agreements are expected to be signed,” the source said, adding that before the prime ministers’ trip, the head of the armed forces, General Qamar Javed Bajwa, will arrive in the kingdom on May 4.