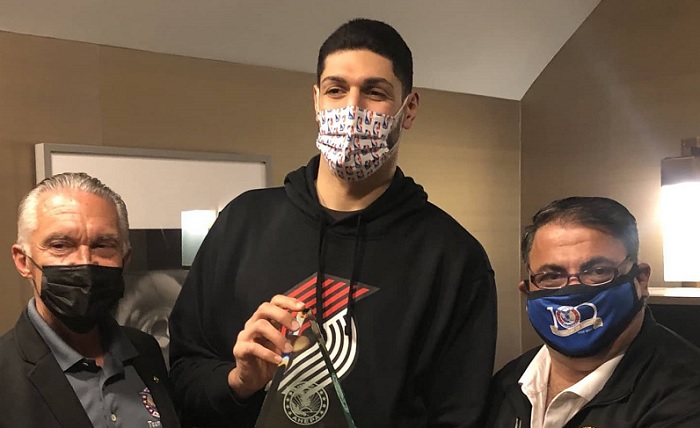 It’s an honor to accept the top human rights award from @OrderOfAHEPA, Kanter wrote in a tweet. It is a huge step forward in building strong bridges between Turkey and Greece. A big thank you to the Greco-American community.

As a result, Kanter and his family became targets of the Turkish government. Kanter’s father, a political opponent of Erdogan, was jailed for seven years.

Kanter was born in Switzerland to Turkish parents and raised in Turkey, but his outspokenness has now turned him into a persona non grata in the country.

His NBA games were censored in Turkey and he had to forgo international team travel due to the threat of arrest abroad.

“Enes Kanter’s activism and open criticism of authoritarianism in Turkey, to the point where he is essentially an enemy of his own country, make him one of the most important and credible voices for justice and human rights – not just in sport – but also in the global community, ”said Horiates.

“He speaks on behalf of the millions of people who cannot speak out and pleads for a more just Turkey and, in essence, a more just world. We are proud to present him with our first human rights award. “

Horiates added his gratitude for the time Kanter spent with him discussing human rights issues and abuses in Turkey.

According to Horiates, Kanter spoke of the imprisonment of political opponents, journalists and others who have been targeted, harassed – and even tortured – simply because of their ethnicity or opposition to Erdogan.

Horiates also thanked Kanter for the ease with which Kanter allowed AHEPA to postpone the award ceremony, which was originally scheduled last year but postponed due to the pandemic.

The Utah Jazz chose Kanter, a center, as their third overall pick in the 2011 NBA Draft.

Founded in 1922 in Atlanta, Georgia, on the principles that underlie its struggle for civil rights and against discrimination, bigotry and hatred at the hands of the Ku Klux Klan, AHEPA is the largest and most former association of American citizens of Greek origin. and Philhellenes with over 400 chapters in the United States, Canada and Europe.

The mission of AHEPA is to promote the ancient Greek ideals of education, philanthropy, civic responsibility and family and individual excellence through community service and volunteerism.