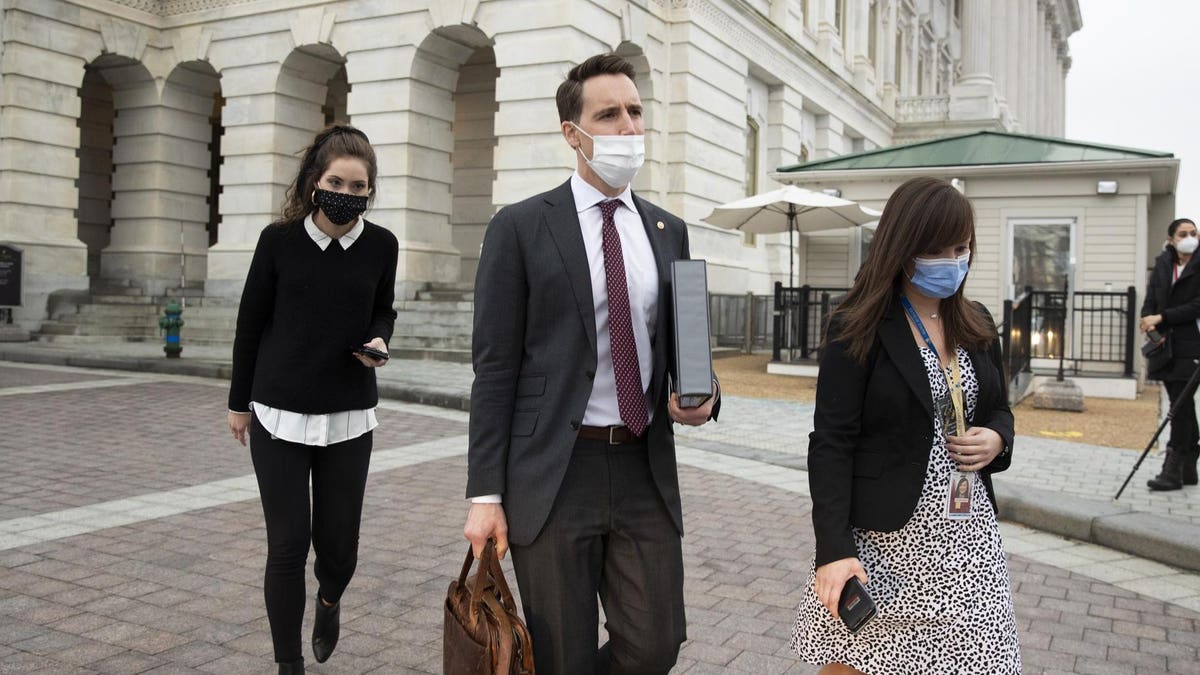 Sen. Josh Hawley (R-Mo.) On Tuesday defended the first pump he gave to pro-Trump protesters gathered outside the Capitol shortly before the Jan.6 attack, suggesting the group that he greeted was among those who were there peacefully, and that it was unfair to confuse them with rioters.

WASHINGTON, DC – February 11: US Senator Josh Hawley (R-MO) (C) departs at the end of day three … [+] of the second impeachment trial of former U.S. President Donald Trump at the U.S. Capitol on February 11, 2021 in Washington, DC. House impeachment officials continue to argue that Trump was singularly responsible for the Jan.6 attack on the U.S. Capitol and that he should be convicted and barred from again serving public office. (Photo by Michael Reynolds-Pool / Getty Images)

In an interview with the Washington Post Live to promote his upcoming book, Hawley defended the infamous move, which has gone viral and has become fodder for critics of his objection to President Joe Bidens’ electoral college victory.

Hawley said the group he greeted as they walked to the House chamber on the morning of the attack were standing behind barricades, waving US flags and had every right to be there under the First Amendment.

Hawley said he didn’t regret the first pump even after hundreds of pro-Trump protesters stormed the building later in the day, telling the Post he was unsure if any of the between them had participated in the criminal riot.

Hawley called it an insult to the thousands of people who came to the Capitol that day to protest peacefully to pool them with rioters, saying he did the same for Black Lives Matters protesters mistaken for rioters.

Hawley said the January 6 rioters should be convicted for all the crimes they committed regardless of their political ideology, comparing them to Noah Green, an apparent Nation of Islam adherent who killed a Capitol policeman with his car last month.

Hawley stood out as one of the most anti-Biden Republicans in the Senate. He and Sen. Ted Cruz (R-Texas) were the only senators to file objections to Bidens’ victory, with Hawley filing his even after the attack resulting in widespread theft and property damage and five dead. He then voted against all the Bidens cabinet candidates.

Hawley has even been accused by some Republicans of guilt in the attack for lending credibility to former President Donald Trump over baseless fraud allegations, with at least seven Senate Democrats calling for his resignation or impeachment following his objection in January.

Despite being widely seen as a likely candidate for the 2024 presidential election, Hawley claimed in the interview that he did not plan to run and would rule out a candidacy if Trump made an effort to return to the White House. .