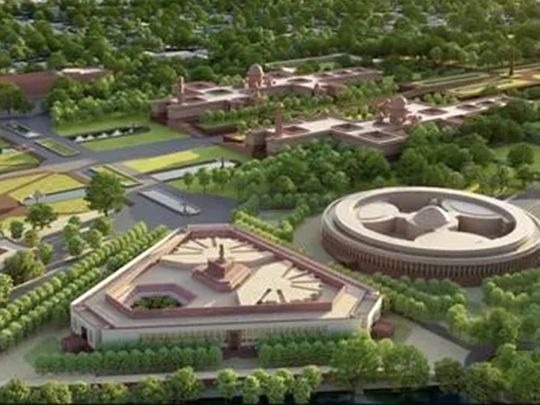 The redevelopment of Central Vista in New Delhi, the seat of Indian government, contested in various ways, was ultimately cleared by the Supreme Court of India and all objections were dismissed.

However, opponents wanted to have another try. Thus, they went to the Delhi High Court to plead that, since the COVID-19 pandemic is raging, the work is stopped and the money allocated to it is diverted to something else.

The Delhi High Court heard the objections and summarily dismissed the perennial negativists. The court rightly realized the fallacious nature of the plea, dismissed it outright, and even characterized Central Vista as a project of national significance.

Now that the legal route has been closed, toolbox-inspired and committed pessimists have turned to the media to advance their dubious propaganda. Their language is virulent, their facts are confused, their arguments are laconic and their story is above all false.

It is therefore important to clear up the facts lest those who lost in the courts have an undisputed place in the court of public opinion.

The current Central Vista in New Delhi was designed during the British colonial period by Edwin Lutyens and Herbert Baker. Their inspiration, the Capitol complex in Washington and the Champs Elysees in Paris was not something that remotely represented the cultural or civilizational moorings of India.

After India’s independence in 1947, ugly and haphazard constructions were added to the legacy structures to house the many ministries and central departments. These buildings represent the worst of India’s socialist phase.

There was no sense of design or aesthetics in any of the new buildings constructed. What the current Central Vista presents a mishmash of British colonial past and socialist stagnation is actually a visual confirmation of a country that was an economy in scarcity and had to make do with makeshift buildings housing the most important ministries. most important of India.

India, which has one of the best architectures in the world, from ancient times to medieval times, from the architecture of the great temple in the south to the Ajanta and Ellora caves in the west and the temple from the sun in the east to the marvelous Taj Mahal in the north so far presented a sad image in its flagship seat of peoples’ power.

But insufficient design is not the only or even the main reason. All buildings in the Central Vista area are over 50 to 60 years old and are nearing the end of their useful life. The North and South blocks, the two centerpieces, are almost 100 years old.

As India’s needs have increased, in keeping with its population growth and the growth of the economy, there is a shortage of sufficient office space to meet all current needs. Ministries and departments, however dispersed they may be, operate in silos, and make the public interface extremely difficult.

In the absence of a building in line with current requirements, the recurring costs of modernization and renovation weigh on the public treasury each year. Several central government ministries and departments have to rent office space outside of Central Vista due to lack of space. This means a significantly high and recurring annual expenditure of around $ 150 million.

About 7,000 Defense Service employees are seated in barracks which were temporary structures designed as stables and barracks created during World War II.

As such, it is more than obvious that a restart of the zone was required. Many committees have suggested it in the past and even the former chairman of Lok Sabha under the government of Dr Manmohan Singh has strongly advocated for it. It was finally the government of Prime Minister Modi that took the step in accordance with the calendar of the 75th year of India’s independence.

The objectives of the Central Vista development master plan are multiple. Upgrading the space of parliaments is a main objective. New facilities must be created to meet the representation requirements that will be necessary after 2026, when the boundary, frozen since 1971, opens and the number of elected members of Parliament increases in proportion to the Indian population.

Consolidating, rationalizing and synergizing the functioning of government, so that it is not dispersed as it is now but that it functions in synthesis and in unison, is another primary objective of the plan.

Another important goal is to provide adequate and permanent facilities for the Vice President and Prime Minister of India. By the way, India is the only major democracy in the world that does not have institutionalized residential and office space for the head of government, the Prime Minister of India. Take the United States, the White House, or Britain at 10 Downing Street, and other similar democracies.

This exceptional situation exists because in India, institutional buildings such as Teen Murti Bhavan or 1, Safdarjung Lane or 10 Janpath residences of former Prime Ministers have all been either converted into private memorials or have continued to be occupied by the family of the former Prime Minister.

The new Central Vista plan will create an institutional, fully functional and permanent place for the Vice President and Prime Minister of India.

The buildings of the old and the new Parliament will be harmonized so that the two buildings function together as a legislative enclave. The new parliament building will house the largest directly elected house of Lok Sabha and the state house of Rajya Sabha.

The new total capacity will be 888 seats and 384 seats respectively. The New Lok Sabha Hall will also have additional capacity, up to 1,272 seats, to host joint sessions of Parliament.

Central Vista Avenue, used for national occasions such as the Republic Day parade and which is a tourist hotspot, is also being renovated, its infrastructure modernized and new social amenities added to better meet the needs. Population.

Approximately 5.64 acres of land will be added to the green zone and an additional 2 hectares of public green spaces will be accessible to all citizens. The north and south blocks will be converted into the new national museum.

A joint central secretariat (CCS) comprising 10 buildings will be constructed so that the seamless work can occur between the ministries and their current dispersed and silo-style operation is definitively completed.

First on the cost. The total cost of the Central Vistas project is estimated at $ 2.8 billion. This will happen over several years and not over a single year, as some of the opponents try to project. So far, only projects worth around $ 200 million have been launched.

In contrast, the Indian government’s budget for health and wellness in fiscal year 2021-2022 is an all-time high of over $ 29 billion. This is about 10 times more than the overall cost of the entire Central Vista project and that too for just one year.

Take another metric. The vaccination allowance alone for the current year, which stands at nearly $ 5 billion, is almost double the budget of the Central Vista project and that which is spread evenly over several years. Thus, the erroneous comparison between the priorities, which the negativists try to diffuse, is quite out of place.

The cascading effects of building infrastructure on such a large scale are manifold. Only the two ongoing projects have provided direct livelihoods to more than 10,000 skilled, semi-skilled and unskilled workers on and off site.

Many of them are only employable in the construction sector. Should their livelihood, already heavily impacted by the pandemic, be completely sabotaged?

Significant indirect jobs have also been created in the manufacturing and transportation sectors, such as transporters of cement, steel and other building materials.

Finally, the Central Vista development master plan, when completed, will be an Indian place, for Indians and built by Indians. 75 years of independence, with India’s population increasing nearly 5 times in the meantime and India’s economic, strategic and global profile on the rise, it is only fitting that India gives itself an appropriate seat of the power of peoples.

The ambitious New India is no longer content to play the second fiddle or compromise on the second best. Plans implemented today must meet the needs of a young India for decades to come.

The New Central Vista will only be an important landmark on this journey.

Akhilesh Mishra is the CEO of Bluekraft Digital Foundation and was previously Content Director for MyGov India.