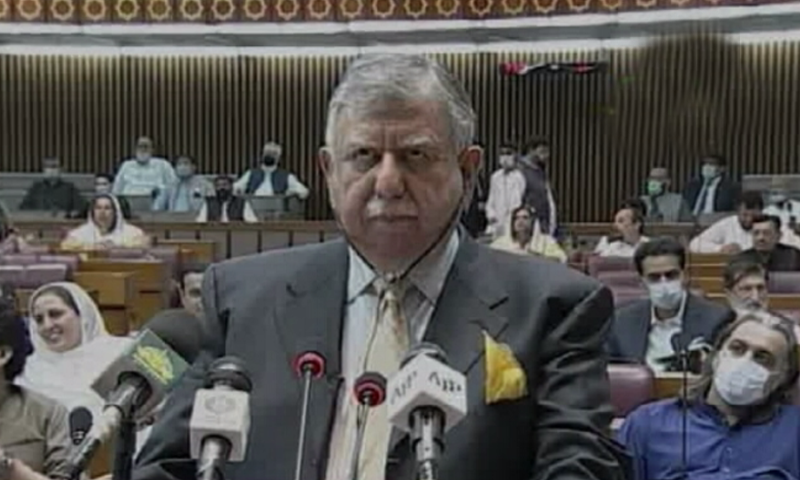 Opposition leader in the National Assembly Shehbaz Sharif and PPP leader Bilawal Bhutto Zardari were in the house during the budget process. Earlier, Bilawal met Sharif in his house of assembly and they decided that the two sides would jointly protest against the PTI budget.

Tarin began his speech by saying that it was an honor for him to present the third PTI budget.

He said that there were a lot of difficulties but that this government had laid the foundations for the revival of the economy and now “it is moving towards development and prosperity”.

Defense service spending represents around 16% of total budgeted spending for FY22, up from 18% last year.

The budget deficit for fiscal year 22 was budgeted at Rs 3,420 billion, or about 6.3 percent of GDP, down from 7 percent last year.

Key announcements during the budget speech

He recalled that when the PTI came to power, the economy was almost bankrupt. “Everyone knows we were under the weight of so many loans,” he said, adding that the current account deficit had reached an all-time high of $ 20 billion.

Lawmakers rally around Prime Minister Imran ahead of the budget speech. DawnNewsTV

“Meanwhile, exports were contracting and there was a more than 100 percent increase in imports,” Tarin added. “Despite this backdrop, a growth rate of 5.5% has been harped on about.”

Tarin said the PTI government must make all repayments to save Pakistan from default.

“It took time to stabilize the economy due to the pandemic, but we met our targets. The current account deficit of $ 20 billion turned into a surplus of $ 800 million while a primary deficit of 3.6% has been reduced to 1%, ”said Tarin.

“After much effort, the government managed to put the economy on the path to development.”

The Minister of Finance announced that for fiscal year 22, the government had set the GDP growth target at 4.8 pc.

“We hope that growth will be even higher than that because of the steps we have taken in this budget. As in the past, we will not leave weak segments of our society at the mercy of the trickle down effect.”

He said that in the next two years the government wants to increase growth to 6-7 percent.

For the next fiscal year, the government aims to keep inflation at 8.2%, which is significantly higher than the 6.5% targeted for fiscal year 21.

The Minister of Finance announced that no new tax was imposed on employees in the budget.

He added that in order to support small businesses, the annual turnover tax cap has been increased from 10 million rupees to 100 million rupees, while the sales tax is reduced.

“Soaring prices for locally manufactured small cars are a major concern for low-income families. It is proposed that small cars up to a displacement of 850cc could be exempt from value added tax in addition to reducing the sales tax rate from 17 pc to 12.5 cm 3, “said Tarin. .

“To support electric cars, the Pakistani government wants to support the manufacture of electric cars for which many tax breaks are granted.”

He said Pakistan had witnessed an “unprecedented” increase in online market sales during the Covid-19 lockdown. “However, the contribution of these e-commerce platforms to the economy is minimal, so it is proposed to integrate e-commerce transactions into the sales tax net,” he said.

The minister also announced that a tax exemption was granted on “syringes with automatic deactivation” with the aim of minimizing the impact of deadly diseases like Covid-19.

The federal excise tax on telecommunications is reduced from 17% to 16%, he said.

Earlier, as Prime Minister Imran Khan arrived in the parliament building for the session, a reporter asked him if the budget would be citizen-friendly. “Everyone will be happy [with the budget],” he has answered.

Prior to the budget session, PPP chairman Bilawal-Bhutto Zardari chaired a meeting of the parliamentary PPP committee to decide on the party’s strategy for the session.

Bilawal called on PPP lawmakers to give the government a “hard time”, saying the government had designed an “anti-poor”, “political” and “selected” budget.

According to Radio Pakistan, the federal cabinet met today in Islamabad to discuss and approve the budget proposals. Prime Minister Imran chaired the meeting.