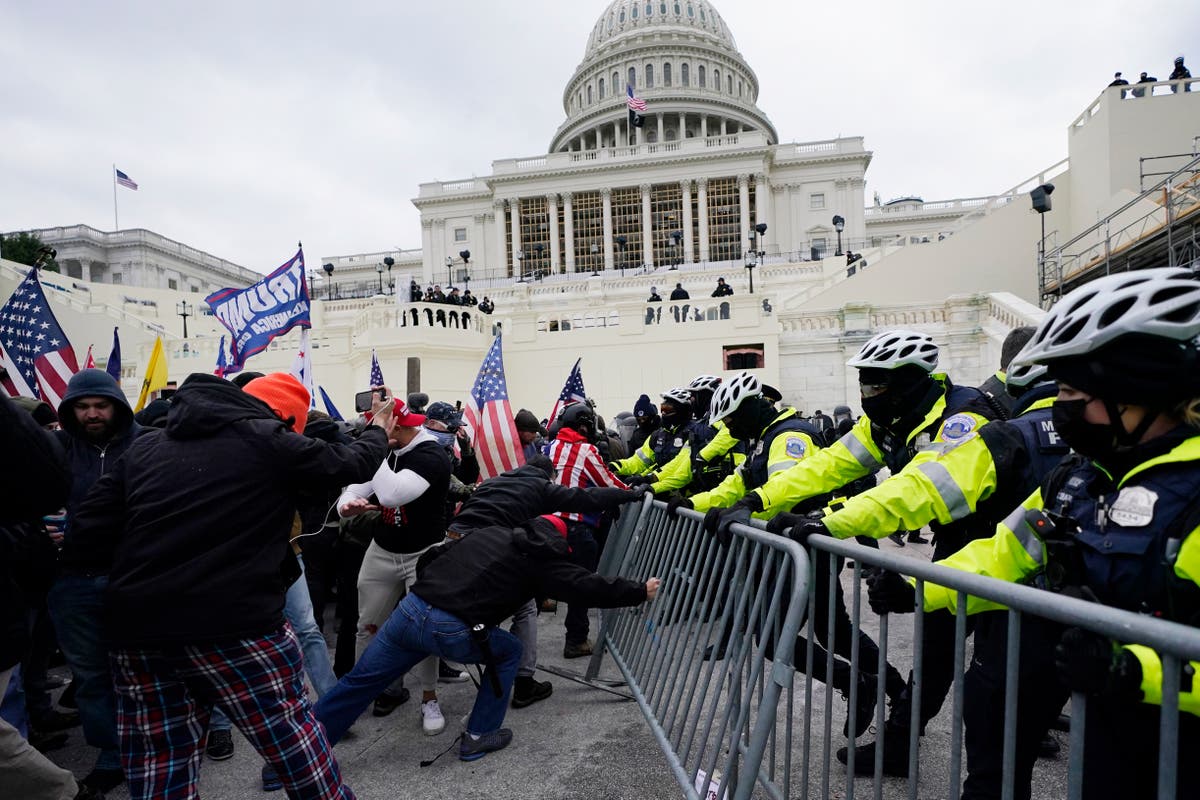 A Chicago police officer accused of violating the United States Capitol and entering a senator’s office during the January 6 uprising sent photos of himself inside the building as he wore a police department sweatshirt after telling someone he was on his way to Washington to save the nation.

Karol Chwiesiuk, 29, was arrested on Friday and faces five counts of misdemeanor, including entering a restricted building, disrupting government affairs and disorderly conduct on the Capitol grounds in an attempt to ‘interfere with a congressional process.

Prosecutors allege in a criminal complaint that Chwiesiuk was part of a mob that broke into and damaged the office of Senator Jeff Merkley, an Oregon Democrat. They also say that a few days before he traveled to Washington to attend a rally in support of then-President Donald Trump Chwiesiuk, who wrote to a friend that he was going to “save the nation and was busy planning how to (expletively) raise the Communists. ” He then sent photos of himself inside the Capitol, prosecutors said.

Chwiesiuk was on sick leave from the police department when he traveled to Washington for the attack, according to the complaint. In addition to texting, he also sent photos of himself inside and outside the Capitol. In it, Chwiesiuk is smiling and wearing a sweatshirt with a Chicago Police Department emblem under a non-zippered coat.

We entered the capital lmfao, he texted, using an abbreviation indicating he thought it was funny, according to the complaint.

Chwiesiuk appeared by telephone in federal court in Chicago on Friday. His attorney, Tim Grace, said Chwiesiuk had been a Chicago police officer since 2018 and had previously served as the Cook County Sheriff’s Deputy. He was stripped of his police powers this week and is on call, Grace said.

Police Superintendent David Brown told a press briefing on Friday that Chwiesiuk had his police powers withdrawn on June 2 after the department learned of his involvement in the attack.

Brown said if the allegations are true it is a betrayal of everything we stand for. ”

What happened in Washington on January 6 was an absolute disgrace, he said. The fact that a Chicago police officer was indicted in this attack on American democracy makes my blood boil.

We have zero tolerance for hate and extremism of any kind within the Chicago Police Department, Brown said. And if you harbor such ignorance in your heart, you should withdraw your star now and find another line of work, or I will do it for you.

Five people, including a Capitol Hill policeman, died in the attack and hundreds were injured. Two other officers subsequently committed suicide. More than 450 people from across the country have been charged.

Chwiesiuk was arrested Friday morning at his parents’ home in Chicago, where he lives, reported the Chicago Tribune. US investigating judge Gabriel Fuentes ordered his release on bail. Chwiesiuk was ordered to hand over any firearms and his firearm owner ID card. He only spoke once, answering Yes, I do when the judge asked him if he understood the terms of his bail.