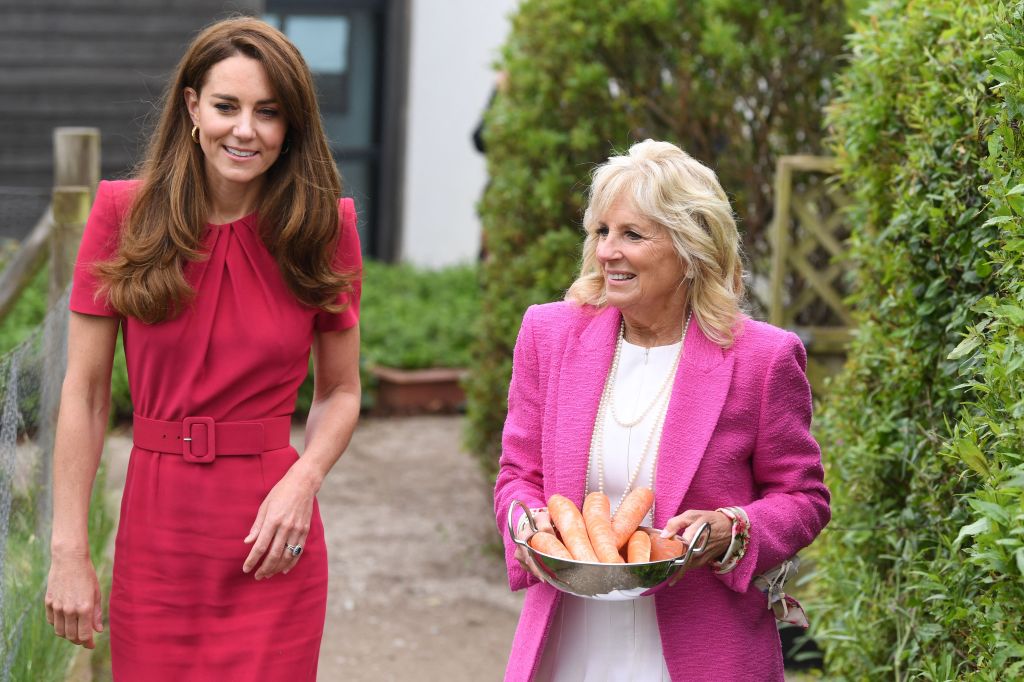 First Lady Jill Biden and Kate Middleton appeared to be best friends, bonding around their common interests in children and education during an appearance together Friday at a primary school in Cornwall, England, while the President Joe Biden attends the G7 summit nearby.

Biden and the Duchess of Cambridge also appeared to coordinate their outfits by color – or ask their assistants to make sure their outfits would complement each other. Biden wore a dark pink blazer over a white dress, while the Duchess wore a fuchsia Alexander McQueen dress. Both women wore nude heels.

The Duchess of Cambridge and the First Lady of the United States visited a school in Cornwall on Friday as G7 leaders arrived for a summit. Kate Middleton and Jill Biden were at Connor Downs Academy where they chatted with students and met the class bunny. pic.twitter.com/hpkUomksK8

The friendly photos of Kate and Jill Biden, a longtime educator, easily chatting together, meeting the young students at the school and giving carrots to the children’s bunnies, contrast with the last time the Duchess was in the presence of American First Lady Melania Trump – and how awkward it all seemed.

In June 2019, President Donald Trump and his family traveled to the UK for a three-day state visit, but during that visit the only time Kate could have interacted with Melania Trump was during a a state banquet at Buckingham Palace, and there is a notable absence of photos showing the royal couple with this president and this first lady in particular.

Prince William, as the future king, and Kate attended the state banquet, with the Duchess looking regal in a white Alexander McQueen gown, a tiara and sapphire and diamond earrings.

William and Kate were not specifically photographed with the controversial President of the United States or his first lady. There is only one video of them following the Queen, Trump and Melania Trump, escorted by Prince Charles, into the banquet. The duty of posing for photos with Donald and Melania Trump has been left to the Queen and heir to the throne, Prince Charles and his wife, Camilla.

Meanwhile, Kate and William have not shied away from being pictured multiple times with Trumps predecessors Barack and Michelle Obama.

Younger royals, especially Prince Harry, were known to be friendly with the Obamas. Kate and William invited the former couple to a private dinner at their Kensington Palace apartment during their visit to England in April 2016. The two couples also appeared together in a now iconic photo of Barack Obama meeting their son Prince George, then 3 years old.

Do you remember when Prince George wore his bathrobe to meet Barack Obama? It was my peak. pic.twitter.com/2F1cVdvtGz

While visiting The Trumps, things got particularly awkward earlier on June 3, 2019 when the Queen hosted a lunch at Buckingham Palace for Donald and Melania Trump. Trump’s daughter and son-in-law Ivanka Trump and Jared Kushner accompanied the lunch.

William and Kate were not at lunch, but Prince Harry attended and reportedly tried to keep his distance from the President. This was understandable, given that Trump’s visit to the UK was preceded by controversy: Trump had called Harry’s American wife Meghan Markle “bad” in an interview because the former actress television had called him misogynist during his 2016 presidential campaign.

Harry was seen by a royal reporter who looked uncomfortable and was trying to avoid being photographed with Ivanka Trump, Trump’s senior White House adviser. The Duke of Sussex “stood back noticeably as the Queen led the group into the palace photo gallery, to examine the artifacts in the palace collection. He also “relaxed” after entering the gallery with Ivanka Trump.

Prince Harry, who was also at the private lunch, visibly stood back. He walked in with Ivanka (was he supposed to show her around the exhibit ?? Or maybe they sat next to each other for lunch) and then walked away to speak to the Lord Chamberlain (Earl Peel). pic.twitter.com/NLyfNvkZx6

So far, it’s fair to assume that Kate and William will be more comfortable interacting with the Bidens than they would have been with the Trumps, had Donald Trump been re-elected.

Meanwhile, Kate and William have also taken on more prominent roles with the public over the past two years, particularly after Harry and Meghan Markle left royal life.

As the second to the throne, William has also taken on an increased role in helping the 95-year-old Queen and Charles lead the Royal Family, while he and Kate continue to champion causes such as mental health, well-being. general children and the importance of sports and the visual arts.

During the COVID-19 pandemic, Kate and William were also at the forefront of royal efforts to show support for healthcare workers and encourage Britons to get vaccinated. For the G7 summit, they are attending some official events, marking a new milestone in their progression as members of the royal family, the Daily Mail reported.

With her visit with Jill Biden to Connor Downs Academy Kindergarten, Kate was able to show her commitment to children’s education. Biden, who still works as a teacher at a community college, was asked about the impact of early childhood education.

“It’s very important for the foundation,” she said. “As a teacher at the higher levels, if they don’t have a good foundation, they fall far behind. It’s amazing how advanced they are.

In the evening, Kate and William are expected to attend a reception for world leaders, hosted by Prince Charles and Camilla, Duchess of Cornwall.