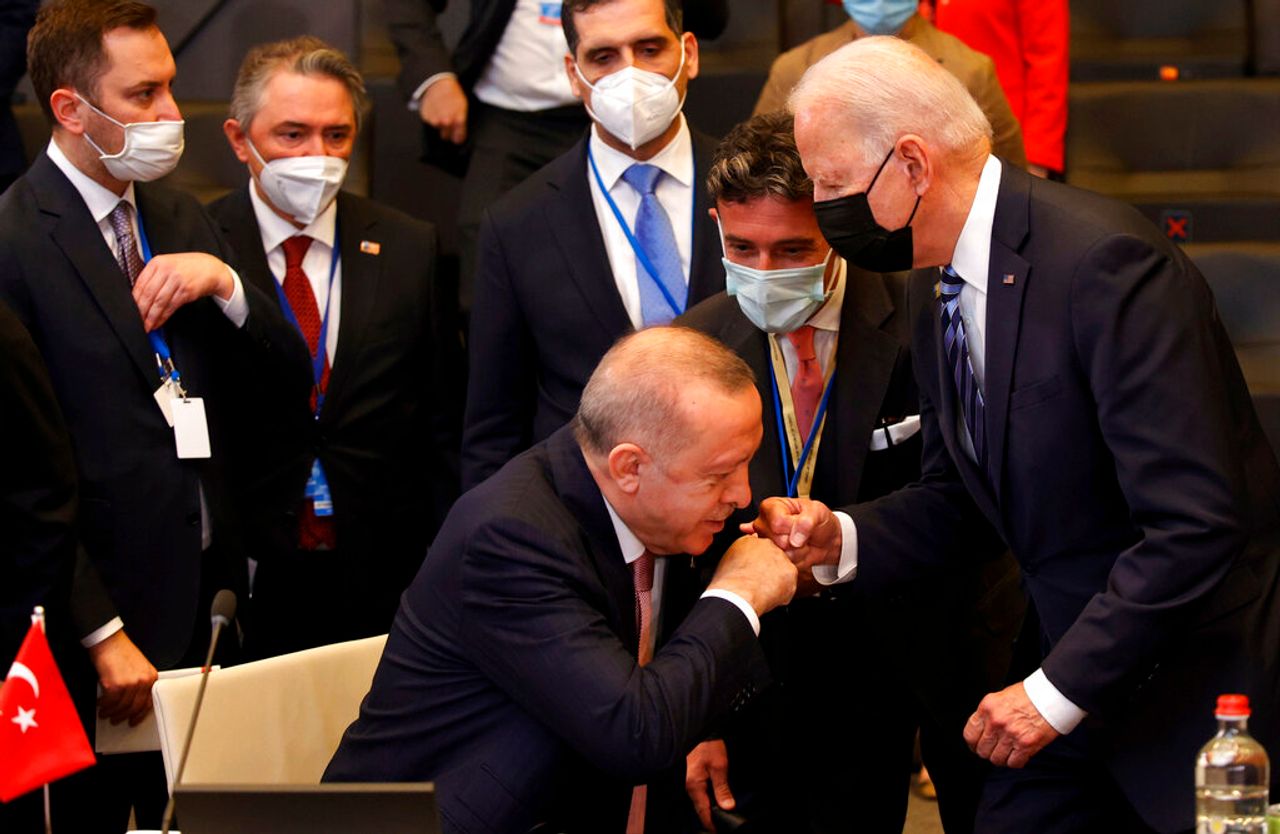 Turkish President Recep Tayyip Erdoan met his US counterpart Joe Biden on Monday in a closed-door meeting at the NATO summit in Brussels. The two leaders then put a positive face on this first face-to-face meeting between them since Biden took office, although several important differences remain unresolved.

The meeting came just weeks after the US State Department condemned President Erdoan’s recent anti-Semitic comments, after Erdoan attacked Biden for supporting the ongoing Israeli attack on the Palestinians. Calling Israel a terrorist state, Erdoan accused Biden of writing history with blood on his hands.

Last week, US Secretary of State Antony Blinken said Turkey was not acting as a NATO ally but was violating international law on these issues, including the Armenia-Azerbaijan war, the Eastern Mediterranean and Libya. .

the Washington post wrote: The last time Biden met the Turkish leader, during a vice-presidential visit to Ankara in 2016, was to deny Erdogan’s accusations that the United States had helped prepare an attempt to coup against him.

Briefly noticing his meeting with Erdoan, Biden said: We have had a positive and productive meeting, largely one-on-one. We have had extensive discussions on how to proceed on a number of issues. He added: Our two countries have big agendas. Our teams will continue our discussions, and I am convinced that we are making good progress with Turkey and the United States.

In the face of a worsening economic crisis and growing social anger exacerbated by the homicidal response to the pandemic, as well as allegations by far-right gangsters undermining his government, Erdoan issued a more detailed statement on the meeting. Despite his previous nationalist tirades against the United States, he declared his commitment to the imperialist NATO alliance. He said: We will increase our cooperation with the United States. There is no problem between us that cannot be resolved.

We believe that cooperation between the United States and Turkey will contribute to regional security, he continued. In fact, the regional security created by the imperialist wars waged by the United States in the Middle East and North Africa over the past 30 years has devastated Afghanistan, Iraq, Syria, Libya and beyond. beyond, killed millions and turned millions more into refugees trapped in squalid camps.

In the summit communiqué, the NATO powers took the opportunity to reiterate their gratitude to our ally, Turkey, for hosting millions of Syrian refugees. Maintaining close military-strategic ties with the United States and NATO, the Turkish ruling class willingly assists in imperialist plunder.

Erdoan added that there is a strong will for US-Turkish cooperation, based on mutual respect and interests in all fields. However, no concrete progress has been reported in the major diplomatic conflicts between Washington and Ankara.

The first is American support for Kurdish nationalist militias in Syria. Ankara sees a possible US-backed Kurdish state in Syria as a major threat to its national interests. In this regard, Erdoan said, our expectation is that our allies reduce their support for these terrorists, referring to the forces of the Kurdish People’s Protection Units (YPG) in Syria. Ankara considers the YPG to be the same as the Kurdistan Workers’ Party (PKK), which is banned in Turkey as a terrorist organization.

According to Al-Monitor, the Biden administration has decided not to extend a sanctions waiver granted by the Trump administration in April 2020 to US oil company Delta Crescent Energy, whose waiver expired on April 30, to operate in the northeastern Syria.

However, this does not signal a major shift in US policy towards Syria. Hundreds of American soldiers remain in the area controlled by Kurdish forces. Last month, Acting U.S. Assistant Secretary Joey Hood traveled to northeast Syria to meet with senior officials of the YPG-led Syrian Democratic Forces (SDF) militia.

Last week, Turkish Defense Minister Hulusi Akar made similar anti-YPG appeals to NATO during the opening ceremony of the NATO Maritime Security Center of Excellence in Istanbul. This initiative targets Russia, in particular in the neighboring Black Sea. Turkey has repeatedly called on its allies to fight together against the YPG / PKK and Daesh [ISIS] terrorists in northern Syria, who threaten our national security and regional stability, he said.

Boasting that Turkey is among the eight countries that contribute the most to the military budget with a rate of almost 2% of its GDP, Akar repeated that his government was proposing to build a so-called safe zone in the north. from Syria. He said: Time and time again we have spoken to our NATO allies about the need to create a safe zone in Syria.

The NATO statement referred to Syria 12 times, announcing plans to monitor and assess the threat of ballistic missiles from Syria. We reiterate our determination to defend NATO territory and borders against any threats and to meet the challenges emanating from Syria.

While Ankara focuses on preventing the construction of a Kurdish enclave on its southern border, it also continues to support NATO’s war for regime change against Syrian President Bashar al-Assad. Significantly, the US media have launched a propaganda campaign to rehabilitate the main US proxy force in this war, Al Qaeda.

The other major issue with no progress at the Biden-Erdoan meeting was Turkey’s acquisition of a Russian-made S-400 advanced air defense system. On the question of the S-400, I said [Biden] the same as I had in the past, Erdoan said.

Washington canceled Turkey’s participation in the F-35 Joint Strike Fighter program and sanctioned the Turkish defense industry on the grounds that its use of the S-400s could compromise US security. Ahead of the NATO summit, White House National Security Advisor Jake Sullivan said: Regarding the S-400 system, our policy has not changed.

The only issue on which agreement has emerged is Turkey’s military presence in Afghanistan, including the maintenance of the Kabul International Airport after the departure of US and other NATO forces. Erdoan said US diplomatic, logistical and financial support is important for a sustained Turkish presence in Afghanistan.

NATO Secretary General Jens Stoltenberg said on Monday: “Some NATO countries, like the United States and Turkey, are also in direct dialogue on how to make an international airport in Kabul sustainable. This is important for maintaining the diplomatic presence and assistance both for NATO allies and for the international community as a whole.

The Taliban, however, denounced this initiative in the service of imperialism. Its spokespersons told Reuters: Turkey has been a part of NATO forces for the past 20 years, so it should withdraw from Afghanistan on the basis of the agreement we signed with the United States. February 29, 2020.

As the World Socialist Website Explained: Underlying the divisions over the withdrawal from Afghanistan are neither concerns about terrorism, let alone women’s rights. What is at stake are the geostrategic interests of a country that has provided US imperialism with an energy-rich foothold in Central Asia and a potential launching pad for wars against China, Iran or Russia.

The American press has presented Erdo’s desire to reconcile only with his NATO allies due to the deep political crisis he is facing in Turkey.

Thanks to both the coronavirus pandemic and its mismanagement of the economy, it now faces severe internal tensions, with rising inflation and unemployment, and a dangerously weakened pound that could trigger a crisis in the currency. debt, the New York Times wrote on Sunday, adding: So he has scaled back his approach, already softening his positions on several issues in the hope of receiving much-needed investment from the West, which Russia cannot provide.

Erdoan’s growing hardships at home and closer to his imperialist allies actually reflect the anger of the working class at the policies of collective immunity against the pandemic and at the decades of growing war among working people in the United States. , in Turkey and around the world.

A left-wing socialist critique of Project 1619 with essays, lectures, and interviews with leading historians of American history.

Some hospitals do not see new patients with COVID-19, but the delta variant may reverse the progression