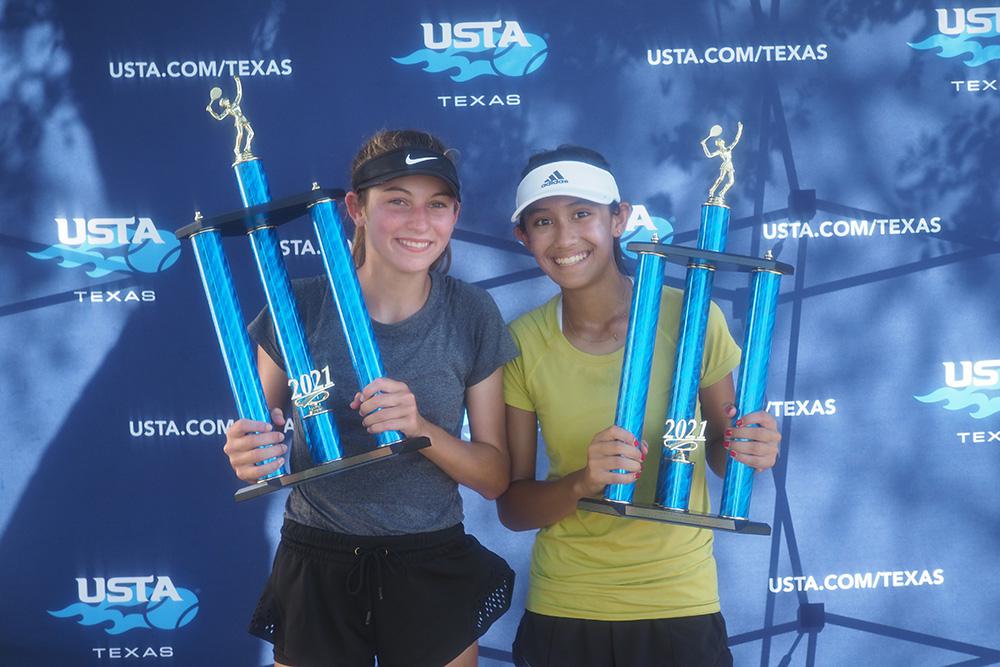 One of the biggest junior tennis tournaments in the United States ended with 10 of the possible 16 championships going to the Houston area standouts. Local athletes won six singles brackets and contributed to four doubles titles from June 19-27 in Georgetown.

Awomoyi was the No. 1 seed in both brackets in the 12-and-under boys division and played by ranking. After a first-round bye, he won four games, losing a total of four games, won a competitive semifinal and defeated Dallas’ Miguel Rooney 6-4, 6-3 in the final.

Awomoyi teamed up with Katy’s Aidan Xu for the 12U boys double crown. After a bye, they won five consecutive games, including a 6-0, 7-5 win against Rooney and Frisco’s Agastya Singh. Xu also reached the semifinals in singles, stopped by Awomoyi.

Nguyen was No. 2 in the league for girls aged 14 and under, but she played seven singles matches without losing a set, culminating in a 6-2, 6-4 win against Frisco’s Daria Budko.

Nguyen and fellow Houston resident Josephine Lombardi won the doubles tournament with five wins, including a close semi-final and a 4-6, 6-4 (10-4) win against the best-seeded duo of Austin’s Kori Montoya and Arlington’s Eva Kovachev.

Chukwumelije Clarke of Humble entered the 12U girls singles tournament without qualifying, but became the champion. Five straight wins saw a final against Spring’s Marta Pacuraru, with Clarke rallying past the No. 2 seed 3-6, 6-2, 6-2. Pacuraru also reached the doubles final, playing with Richardson’s Ashlyn Burrows.

Houston’s Noey Do won the Boys’ Singles 16U Championship, a standings with about 200 entrants. The No. 17, Do played three consecutive games with clinch sets to seven games and added a 6-0, 3-6, 7-6 (1) win in the semifinals. He recorded a 6-1, 6-1 win in the final against Spring’s Mahir Khurana.

Grant Lothringer of the Woodlands narrowly missed two championships and advanced to the 18U boys’ singles final before losing to Dallas’ Landon Ardila. They combined their skills to win the doubles title as No. 1 seed earlier in the week, recording a 7-5, 2-6 (10-7) win against Plano’s Lucas Brown and Rahulniket Konakanchi.

Sofia Mazzucato, who helped Memorial reach the UIL state tournament last fall, was the 18U girls’ singles champion. She smashed through a tie-break set in the round of 16 and rallied for a 6-7(6), 6-2, 6-3 semi-final victory for a 6-3, 6-0 final against top seeded Reya Coe from Plano.

Spring’s Jackson Hinderberger defended his top standings in the 14U boys’ singles, winning five of six games in straight sets. His quarterfinal went to a tiebreak set, but he finished with a 6-0, 6-1 win against Austin’s James Quattro.

Houston’s Catherine Shen teamed up with Spicewood’s Jennifer Jackson to win the 16U girls double crown as No. 1 seed. They went through a tiebreak in the semifinals for a 7-5, 6-2 win against McKinney’s Skylar Moody and Austin’s Lauren Monti. Shen also reached the semifinals in singles.

Houston’s Victoria Zhao also had a week to remember, including a final appearance in the 16U singles series and a doubles quarterfinal with Sugar Land’s Tianna Rangan.

Zhao earned the Mary Lowdon Award, an award for an outstanding junior girl who demonstrates a willingness to work with emerging players, has the proper respect and an athletic and competitive spirit. She was also recognized with the Zina Garrison Sportsmanship Award.

Houston honorees included Katie Garofolo-Ro, who received the Maureen Connolly Brinker Award, voted by players in the 18U girls division, and Qasym Dar, who received the Paul Christian Sportsmanship Award for the 14U division.

Standouts on the field included Houston’s Ellie Morrow, a semifinalist in both 16U girls tournaments, Houston’s Ritesh Patil (18U boys), Spring’s Kendl Klinge (12U girls), Richmond’s Andrea Delgado (14U girls) and Houston’s Elena Mireles (18U girls).