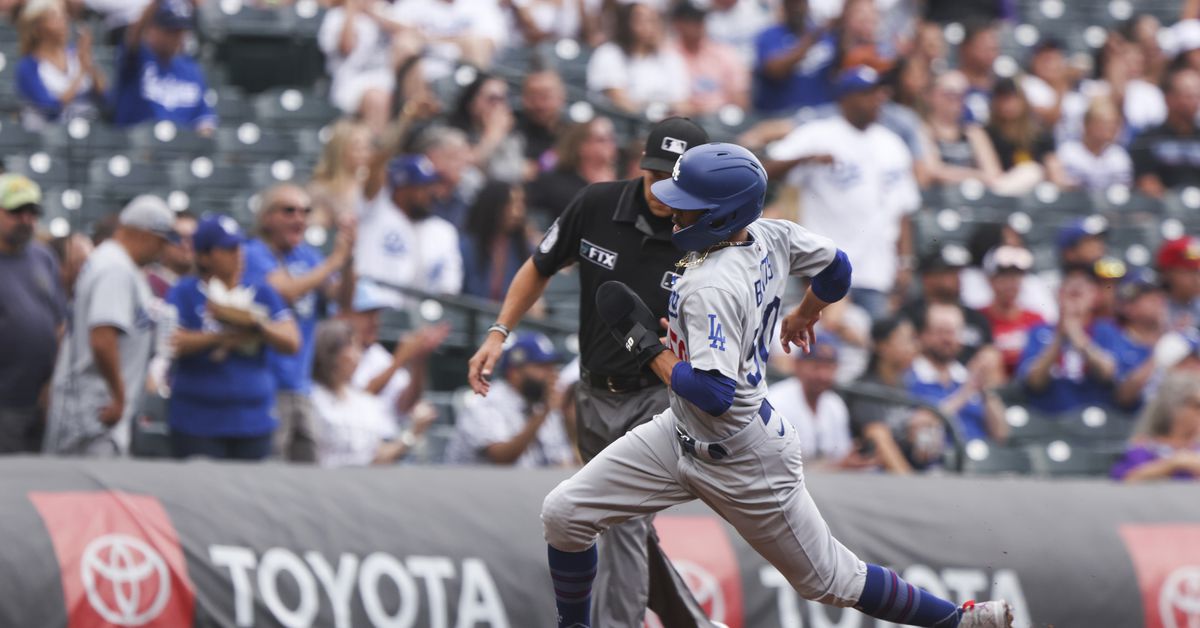 Dave Roberts’ chorus has often been used in reference to Mookie Betts, but we go as he goes was never more literal and perhaps more ominous than Saturday at Coors Field, where the Dodgers rightfielder and leadoff man had four extra basehits in four at bats but had to leave with right hip irritation in a 9-2 win over the Rockies.

Betts doubled in the first and sixth inning and scored both times on a single by Max Muncy. Betts took matters into his own hands with a solo homerun in the third inning.

In the seventh, Betts doubled again, but limped on his way to second base. After consultation with manager Dave Roberts and trainer Yosuke Nakajima, Betts was removed from the game.

I’m good, Betts said. I made it a little crazier than usual today.

Later in the SportsNet LA broadcast, footage of Betts was shown in the dugout after scoring from second base in the sixth inning. He confirmed that when he felt something in his hip.

It’s been nagging him all year. I think a lot of running on the bases and in the outfield kind of irritated it, Roberts said after the game. Hell be down tomorrow, and should be back in the lineup on Monday.

Betts’ struggles have been both throughout the season and relatively frequent with various injuries, in that his worst month, April, saw him post a 119 wRC+. Oh, the horrors of being just 19 percent better than average in offense.

Betts on Saturday counted his hip as one of several injuries he has had throughout the year. Those injuries were frustrating to say the least for Betts, who was rightfully named All-Star for the fifth time, but decided to use the four-day break to recharge.

He is a great worker. He understands his swing and approach. The talent is clearly evident, Roberts said before Saturday’s game. We’ve seen signs in the past few weeks that he was coming out of that little funk. I think we’re going to have a nice ride in the second half.

The fun really just started before the All-Star break, the day he made the choice to skip the midsummer classic. Betts hit a grand slam last Saturday and walked three, scoring four of the 22 runs of the Dodgers LA franchise-record against Arizona. On Sunday, Betts hit three basehits, including a homerun, and scored three more runs.

Betts scored the Dodgers’ first three runs on Saturday and left with the team leading 4-2. The other run so far was a solo home run, another red-hot LA hitter, AJ Pollock, who has seven home runs in 12 games in July.

After Betts left, the Dodgers piled up, with Muncy hitting home runs in the eighth and ninth, earning him a career-high five RBI and matching his career best with four hits. Justin Turner doubled home two more from the wall into centerfield in the ninth to turn this into a blowout.

That was more than enough for Walker Buehler, who threw seven innings after he last pitched seven days ago.

This was the second consecutive Saturday start for Buehler, whose six-day rest was his second-most for a start this season. The All-Star break was responsible for that layoff, although he was the only Dodgers pitcher left with a game to throw in between.

Buehler was at Coors Field earlier in the week, named for his second All-Star team. He was one of 12 active pitchers for the National League, although Buehler and brewers reliever Josh Hader were the only ones not to appear in the game. The decision not to use Buehler came after a pre-match meeting with Roberts.

He was totally fine as a spectator and teammate, said Roberts.

Colorado scored singles in the second and third inning against Buehler, the key hit a double in both frames. The second was helped by an unusual second walk in the inning by Buehler, but it got into a groove shortly afterwards.

After the tying double by Ryan McMahon in the third inning, Buehler retired his last 13 batters. Six of them struckout, giving Buehler eight punchouts that night.

There is an expectation for the guys who are inside? [the rotation] to go deep, and it’s a focus of mine, said Buehler, who won his 10th game of the season.

The Dodgers have defeated the Rockies eight times in a row after their loss in Colorado on opening day.

David Price kicks off the series finale for the Dodgers on Sunday (12:10 p.m. PT, SportsNet LA), with right-handed Jon Gray starting for Colorado.