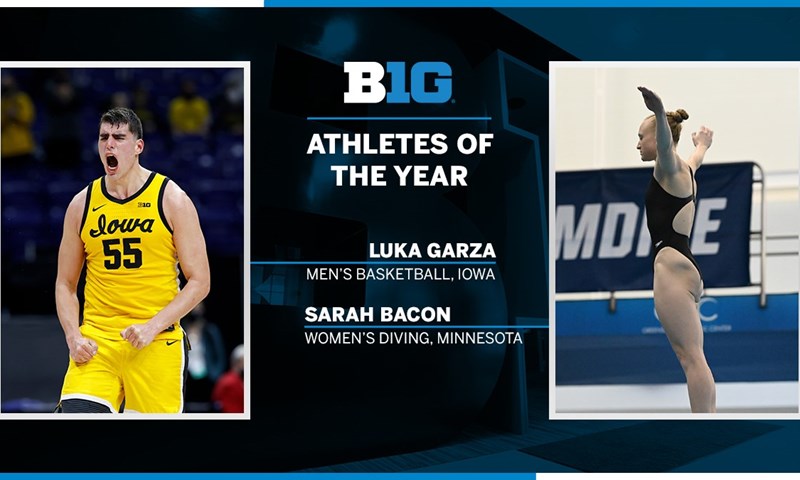 We don’t get enough characters to list all the awards that Luka Garza from Gar @IowaHoops collected in 2020-21.

Garza is the fifth Hawkeye student athlete to be chosen as the Big Ten Jesse Owens Male Athlete of the Year, and the second in the past 35 years (wrestler Brent Metcalf earned the award in 2008). Garza is also the seventh outstanding basketball player to claim the honor and the first since Michigan state guard Denzel Valentine in 2016 not a single Iowa men’s basketball player has received the award before.

Garza received his economics degree in Iowa in May. He is currently preparing for the 2021 NBA Draft, which will take place on July 29 at the Barclays Center in Brooklyn, NY, and will be broadcast live on ABC and ESPN.

Since winning an Olympic red shirt season in 2020, Bacon has been on a tear in diving at both the collegiate and international level. Most recently, Bacon earned a silver medal in the synchronized three-meter event and a bronze medal in the individual three-meter springboard competition at the US Olympic Trials in Indianapolis last month.

In May, she earned an individual silver medal and two Olympic quota places for Team USA at the FINA Diving World Cup in both the individual and synchronized three-meter springboard events, making her the first American woman to medal on the three-meter board since two times. Olympian Kelly McCormick did so in 1989. International success came just after Bacon capped off her historically successful collegiate career with a pair of NCAA Championship titles at both springboard events during the 2021 NCAA Championships in late March.

The pair of titles brought the Indianapolis native’s number of NCAA titles to a remarkable four, making her the winning female student athlete in any sport in Minnesota school history. Her national championship at one meter in 2021 marked an even more incredible third straight NCAA title in the event, a feat of only one other diver since the NCAA Championships debuted in 1982 (Floridas Megan Neyer from 1982-84).

Even more remarkable, the awards and accolades didn’t stop there for Bacon, as she was awarded the Honda Sport Award for Swimming and Diving, the first Gopher woman in a sport and only diver from any institution to receive the award in her 45 – years of history. She also received the College Swimming & Diving Coaches Association of America (CSCAA) Division I Women’s Diver of the Year Award, becoming the fourth Gopher diver since 2011 to receive the award, along with former NCAA two-time Olympian Kelci Bryant (2011). champion Yu Zhou (2015) and four-time All-American Lexi Tenenbaum (2017).

Bacon is a two-time Big Ten Diver of the Year, a 2021 Big Ten Medal of Honor winner, and a two-time Academic All-Big Ten honoree. She graduated from Minnesota in May with her bachelor’s degree in Kinesiology.

Garza and Bacon were among a strong field of 28 nominees (one man and one woman per Big Ten school), including seven National Champions, 24 All-Americans, 17 Big Ten Champions, 14 Conference Players of the Year and eight who collected a national player of the year award.

The full list of nominations for Athlete of the Year 2020-21, as well as the list of all-time winners for each award, can be found below.