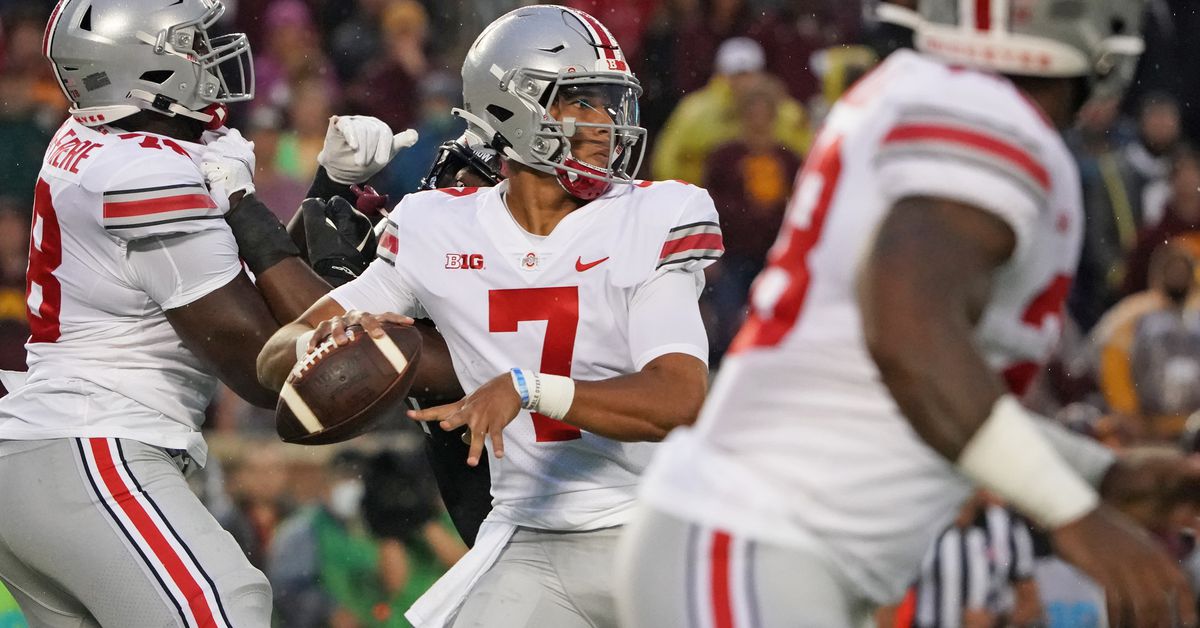 It was a funky starting schedule, but now all 14 Big Ten teams have been on the field and have a game behind them.

There were Thursday games, Friday games, conference games, non-conference games and even a week 0 game. There was plenty to see early on with ranked matchups and of course Ohio State again expected to be one of the best teams in the nation.

Week 1 is officially in the books and the schedule is starting to normalize a bit. Let’s take a look at the power rankings heading into Week 2 of the competition.

(Editor’s Note: AP Poll Rankings are included after the Power Rankings list for each team they apply to.)

New quarterback, same Buckeyes. Ohio State was the only team in the nation not to return a pass attempt this season. It certainly helps a young quarterback to have the best-receiving duo in the country. Despite a rough start, CJ Stroud had a total of 294 yards with four touchdowns and an interception. Chris Olave and Garrett Wilson are arguably the best two wide receivers in the nation, if not, it’s close. Expect Ohio State to once again feel comfortable at the top of the power rankings.

Penn State money line. The Nittany Lions would have been second in the preseason standings. Why? they are better than Wisconsin and showed it Saturday. It was an ugly game, but Penn State was able to hold out defensively. The Nittany Lions are not the 0-5 team that started last season. Sean Clifford has guns in Jahan Dotson and Parker Washington. The defense is rock solid. James Franklin has this team ready for a season of recovery.

Iowa took a 31-3 lead at halftime in Week 1. Did they take advantage of an overrated Indiana team? Yes, but they were able to beat them handily. The Hawkeyes forced three turnovers and held Indiana to 233 yards in total. Obviously, the Hawkeyes will once again have a solid defense and play in the trenches. They will be tested again in an in-state rivalry against a top-10 team.

Wisconsin just wasn’t ready to play in week 1. It was an ugly game for Penn State, which can’t happen at home. Graham Mertz is inconsistent and needs to show that he can play at a high level in the Big Ten. Despite losing in their first game, the Badgers remain in the top four of the rankings, because who’s going to jump them? Wisconsin is still in the rankings for now and do you really believe in the teams behind them?

Is Michigan back? It’s too early to say. They dominated West Michigan as they prepare to take on a Washington team that lose 13-7 to Montana. Anyway, Michigan was impressively rushing for 335 yards. Cade McNamara looked solid and they handled a lesser team the way they should. Jim Harbaugh has to put it together eventually and this could be the year.

It was a sign of things to come when Kenneth Walker III took the first play of the game 75 yards for a score. This got the Spartans rolling and they finished with 326 yards to the ground. The defense held Northwestern to seven points in three quarters and the game was over by the time the fourth quarter rolled around. This was a huge win for Mel Tucker and Michigan State with Youngstown State on the way. The Spartans are 2-0 ahead of them.

Minnesota is 0-1, but a week 1 loss to Ohio state is nothing that will be used against them. They were leading 14-10 at halftime and were able to keep the Buckeyes in check. Mohamed Ibrahim rushed 30 times for 163 yards and two scores before going down with an injury. This was a huge loss in this game and it will be for the rest of the season. The Golden Gophers will have to let others rise to make up for the big loss in the backfield.

Taulia Tagovailoa was impressive in a win over West Virginia. He threw for 332 yards and three touchdowns while Maryland has a fast start. The Terps are still a big question mark this season, but after week 1 there is some positivity.

It was a disaster for the Hoosiers against Iowa. Michael Penix threw three touchdowns. The defense couldn’t stop anyone and the game was over by halftime. Everyone should have seen that Indiana wouldn’t be as good as last season, but it’s not time to throw them into the bottom third of the Big Ten just yet. A week 2 matchup against Idaho could be what they need to do well.

Rutgers was expected to beat Temple. They were two favorites, but no one expected the Scarlet Knights to hit 61 points and hit 47 points. Noah Vedral was solid, Johnny Langan scored twice, Olakunle Fatukasi and Bo Melton are still very good at football. There’s excitement in Piscataway, but the Scarlet Knights need two things to make some jumps in the rankings. They do it consistently and do it against better competition. Both can be achieved on the road against a slightly improved Syracuse team.

It wasn’t an impressive win by Purdue in Week 1. Think about what happened. David Bell, who we know is an elite receiver in the conference, finished with eight catches for 134 yards. Jake Plummer finished 29-for-41 for 313 yards and two scores and they had to fight to the end in a 30-21 win over Oregon State.

It has been a roller coaster season for Illinois so far. A Week 1 win over Nebraska was ruined by a home loss to UTSA. Not much more to say after this one. The Illini will have to prove themselves again. This was certainly not the way to follow up on a Big Ten win to open the season.

Northwestern was a question mark heading into the season and here’s why. They trailed 21-0 against Michigan State early on and never made it back into the game. They lost this game so badly without turning the ball around. Pat Fitzgeralds defenses were fired for 511 yards, which was very surprising.

A 52-7 win over Fordham isn’t enough to get Nebraska out of the basement. Scott Frost’s days could be numbered as the Cornhuskers remain a bit of a mess. Better they beat Buffalo before heading out to beat Oklahoma than the gauntlet of a Big Ten scheme.