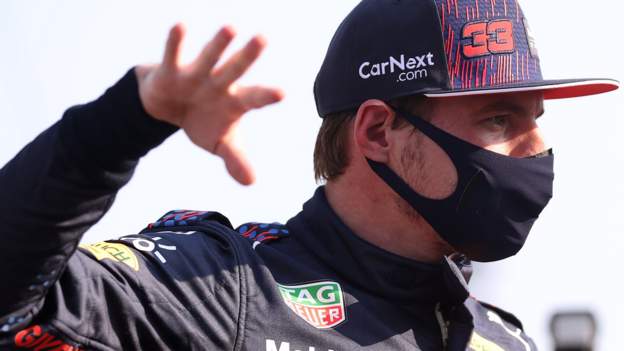 Hamilton’s Mercedes team-mate Valtteri Bottas won the ‘sprint’ qualifying race but will start last after being given a penalty for a power unit change.

Verstappen now leads Hamilton by five points in the title race after two points for second place in the sprint.

Bottas took three points for first and Ricciardo one for third.

The usual qualifying was replaced by a half-hour, 18-lap race to set the grid for Sunday’s 53-lap Grand Prix, which caused drama right from the start.

Alpha Tauri’s Pierre Gasly – the winner at Monza last year – collided with Ricciardo at the first Rettifilo chicane, eventually hitting the barrier after his damaged front wing gave out.

The Frenchman did a great job of minimizing a high-speed collision by turning a badly damaged car away from the guardrail as far as possible as it skipped over the gravel at more than 160km/h.

Verstappen said: “The race was better than expected – we had a good strategy and scored some nice small points and I will start on pole for tomorrow.

“I’m going to try and stay close. We’ve trimmed our car to have a decent top speed, so I’m not worried about our top speed in the race, but Mercedes has a really good pace all round, so I’ll try.”

Behind Hamilton were the Ferraris of Charles Leclerc and Carlos Sainz in sixth and seventh, with Alfa Romeo’s Antonio Giovinazzi a creditable eighth.

Sainz in particular will be relived after a bad crash in morning practice and will require a medical check-up, and Leclerc has recovered from feeling unwell and having to cut his practice session short.

Briton George Russell, who is still over the moon after announcing he will be a Hamilton partner at Mercedes next season, will start 15th but lost unusually to team-mate Nicholas Latifi.

It is the second ‘sprint’ qualifying in a new format that F1 has introduced at a number of race weekends this season – the first was at the British Grand Prix in July.

The Monza event took place in warm, dry conditions in Italy’s Lombardy region near Milan on a circuit affectionately known as the ‘Cathedral of Speed’, due to its rich motorsport history and old, unused tree-lined turns. the royal park of Monza.

What happened to Hamilton?

The seven-time champion had a terrible start, his car being overrun by Verstappen and the McLarens by the time they reached the first chicane.

He then lost to Gasly when he was squeezed into Rettifilo with Norris on his right before the Frenchman ran into trouble as he crossed the Curva Grande.

He told Sky Sports that Mercedes should “try to figure out how to get past the McLarens tomorrow and limit the damage”.

He added: “You saw Red Bull’s pace – I don’t know if they are faster than Valtteri, but it should be easy to win for [Verstappen]. They have more speed and as far as I understand they bring upgrades to every race.”

The fast, low-downforce Autodromo di Monza is believed to suit the characteristics of the Mercedes car slightly better than the Red Bull, which has outperformed most other tracks this season.

Of the top 10, only Stroll and the McLarens used the faster soft tyre, while the others opted for the medium compound, which tire supplier Pirelli says is about 0.4 seconds slower per lap.

But there didn’t seem to be too much of a difference between the two as the McLarens suffered no loss of speed from tire wear towards the end, nor did they affect Verstappen or Bottas once positions had been established early on.

Teams are free to start at any compound for Sunday’s race.

Will Modi find an audience with Biden on his next visit to the United States?