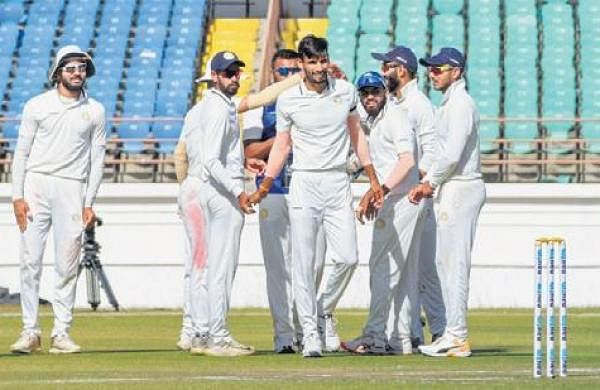 CHENNAI: With India’s domestic season starting next week, there is finally some good news for the players, umpires, match officials and scorers. The Board of Control for Cricket in India (BCCI) is all set to come up with a compensation package for the shortened 2020/21 season at its Apex Council meeting on September 20. There are also strong indications that Ranji’s match rate will also be increased from Rs 1.4 lakh to somewhere between Rs 2-2.5 lakh from the coming season.

Shortly after taking charge as BCCI president, Sourav Ganguly had put forward the idea that state units would bring a contract system to the domestic cricketers. With many players suffering from a shortened 2020/21 season that left no room for the Ranji Trophy, a contract system would have ensured everyone got their usual share of income. Instead, players who only appear in Ranji Trophy have been without pay since March 2020. Although the BCCI had maintained that a compensation package will be rolled out for domestic cricketers, umpires, umpires, video analysts and scorers, the process has been very slow. And the working group formed by the BCCI met only a fortnight ago, after nearly 50 days since its inception, to chart the way forward.

The group consisting of Rohan Jaitley (northern zone), Yudhvir Singh (central), Jaydev Shah (west), Devajit Saikia (northeast), Avishek Dalmiya (east) and Santhosh Menon, and Mohammad Azharuddin (south) has decided to . They have waited so long and in a few days the package will be announced. We all felt that not only the players, but even the match directors should be compensated appropriately. The strength of Indian cricket lies in the domestic circuit and to be healthy it needs to improve on all fronts. The package will definitely be on the higher side, a BCCI official familiar with the developments told this newspaper.

It is clear that the working group has proposed 50-70 percent of the total competition prize of a Ranji Trophy season as a compensation package. In the probability that BCCI keeps it at 50 percent, a player will be paid Rs 70,000 per match. Since each team will play a minimum of eight games in the 2019/20 season, the BCCI will likely consider the same number. This would mean that a player will get a minimum of Rs 5.60,000. This can also add up. It is up to the office holders to choose an appropriate package that takes everything into account, the official added.

There are indications that the pay package for players will be on the high side as the BCCI has to pay the umpires, match officials, video analysts and scorers appropriately. If we reduce the package for cricketers, it becomes even less for others. All of these factors will be kept in mind, the official said. What remains to be decided is whether all players who were part of the 2019/20 season should be considered or whether state units will be asked to come up with names.

Regarding the increase in competition costs, which has been pending for a few years, the official said good news can be expected soon. The walk has been going on for a while. After consultation with the state units, we have arrived at a number. This will be discussed at the apex council meeting and there will be an increase in match fees for all tournaments. Once agreed here, it will be ratified at the annual general meeting, the official said.

Obviously, the decision to ask state units to issue centralized contracts has been delayed as many of them expressed their reservations. While some have yet to get their annual shares, their share will also fall as the number of teams has increased to 38. Units of state prefer the BCCI to pay the fee as this would make the process easy and will be equal for everyone. In addition, units also don’t know what they are doing with national players. They may not be available all season or play one or two games at most. Paying the full contract money is then not justified, according to the official.