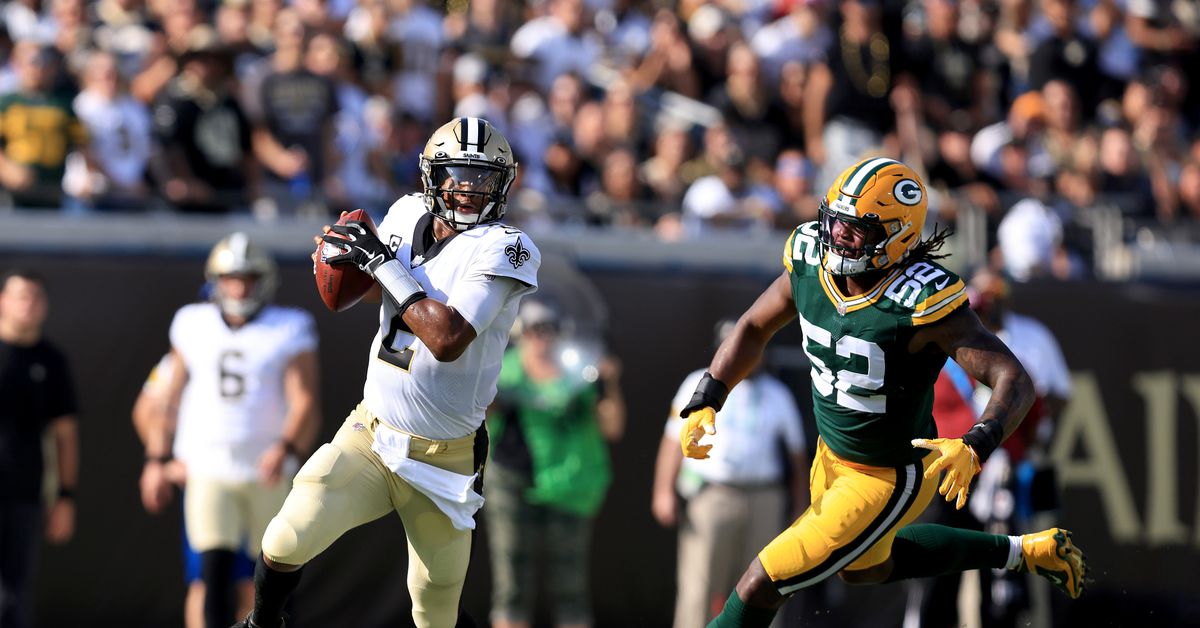 The Green Bay Packers couldn’t do anything to New Orleans Saints in week 1, and the poor defensive effort was a big reason for the blowout loss.

After an offseason of speculation and drama, the Packers came flat on both sides of the ball on Sunday, losing 38-3 in one of the more embarrassing losses in recent memory. Aaron Rodgers looked hesitant, the run was nonexistent and the defense had no answers to slow down Jameis Winston or stop the run.

Winston finished the game with just 20 passes, but completed 14 for 148 yards and five touchdowns. The former No. 1 overall pick didn’t have to broadcast much simply because the running play was so effective, with the Saints rushing for 171 yards on 39 attempts.

New defensive coordinator Joe Barry seemed completely outmatched. Saints head coach Sean Payton seemed to have an answer to everything Barry threw there, but the film also showed that the Packers were simply incapable of taking on their opponent.

The Green Bays defense couldn’t get off the field to start the game. The first three runs for New Orleans went for a combined 39 plays, taking nearly 22 minutes and resulting in 17 points. The line of defense had moved completely forward save for a handful of actions by Kenny Clark. Dean Lowry stood out in the movie from coaches, and not in a good way. He consistently struggled to break free from blockers and spent most of his time flushing the game rather than pushing blockers into the backfield.

The second drive of the game featured some tricky moves from the defensive line. Even if they weren’t pushed back, they did almost nothing to generate pressure on the pass or counter the running backs in the backfield.

Players like Lowry and Tyler Lancaster still get a lot of playing time, despite disappointing performances over the past few seasons. Clark is still one of the better defensive tackles in the league, but the support around him was lacking. Deep players like Kinglsey Keke, TJ Slaton and Jack Heflin could have more opportunities to prove themselves if the defense continues to struggle.

While the defensive line on Sunday was just too tough, Rashan Garys’ aggressive style of play was exposed and exploited by Payton. The third-year edge rusher struggled with gap integrity, allowing the ball carrier to bounce out regularly to pick up extra yards.

Whether it was the game plan or Gary, he struggled with lockout and guys consistently got outside of him.

One of the Saints’ more grueling moves was this fourth-down conversion, with Payton turning a tight end screen to Gary’s side and Winston waiting for him to commit before throwing over his head for the first down. It’s hard to say how much of the blame should go to Gary or the plan without knowing which plays Barry mentioned. Payton did admit, however, that the fourth down-play call was: inspired by something he saw the Los Angeles Rams run while Barry was on the staff last season.

Winston also deserves credit for his pocket awareness on Sunday. He found opportunities to play with his legs in several instances where Gary was overextended, and the Packers weren’t prepared for the Saints quarterback to break out of the bag as many times as he did.

Kevin King is having a hard time again

Kevin King is also back on the hot seat after another brutal performance. He was only targeted twice in the game, but allowed receptions for big plays on both passes. Although the game was ultimately meaningless in the fourth quarter, King allowed an unforgivable 55-yard touchdown to Deonte Harris, who was mainly used as a return man last season.

On the touchdown, King showed a real lack of spatial awareness and was unable to keep an eye on his receiver as Harris ran past him while also struggling to follow the ball in the air.

Tracking the ball, recognizing where the receiver is and timing his jump to play the ball were all serious problems for King during his time at Green Bay. It was surprising to see the Packers bring him back for a one-year deal this past season, especially when there were other cornerbacks in the free market asking for less money.

Fans are already asking for first-round Eric Stokes to start for King, and that’s understandable. While the learning curve for rookies cornerbacks is harder than almost any position, King has become such a liability in coverage that the Packers may have no choice but to start Stokes sooner rather than later.

Despite the final score, it was not bad for the Packers defensively. Preston Smith, who stepped back under Mike Pettine in 2020, made some nice moves throughout the match. With good leverage and arm extension, it was able to generate push and release when needed to pack the ball carrier. Smith also did a good job splitting blockers multiple times to get into the backfield.

One of the few encouraging signs for Barrys’ schedule on Sunday was that it looks like it will allow Smith to play to his strengths as an edge-setter. There were too many instances under Pettine where Smith was asked to contribute in coverage, which prevented him from holding his hole and forcing ball carriers back in.

Unfortunately, there were few bright spots. Barry looked full against Payton, and the defense had no way to slow the Saints beyond an interception that was (wrongly) recalled for a grosser passer penalty against ZDarius Smith.

One game isn’t enough to shut everything down. The players are still coming up with a new defense scheme and it will take time to get comfortable. Head Coach Matt LaFleur praise the communication with the defensive staff as he dissects Sunday’s film, and is hopeful things are moving in the right direction.

There are still 16 regular season games left to play. The rest of the NFC North is also 0-1, meaning the Packers can still top the division and hold onto that lead pretty quickly if things go their way. However, if the Packers once again against a Super Bowl, then Barry and the defense need to start fixing things ASAP.