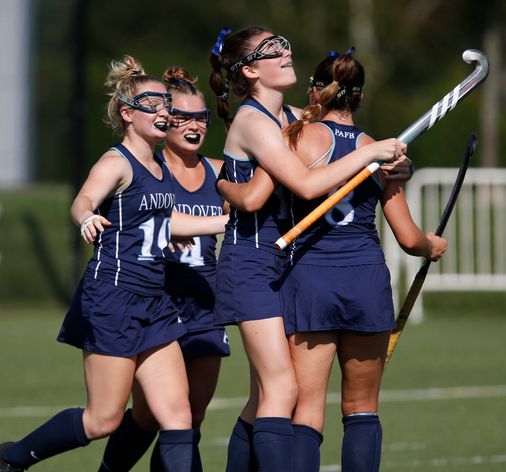 Thayer came on the board first, after eighth grade Maren Boyle scored on a quick break opportunity just two minutes into the first quarter. Andover regained momentum and finished the first half with goals from senior Elizabeth Assimes and sophomore Shea Freda, securing a one-goal lead en route to halftime.

The Tigers earned back-to-back corners to open the second half, but first-year goalkeeper Ellie Parker turned away a series of Thayer shots to keep Andovers ahead. Andover kept Thayers’ offensive opportunities to a minimum for the rest of the game, and an insurance goal from freshman Molly Boyle with 48 seconds left in the game confirmed the win.

It’s only the first game, but you can already see the chemistry coming together and putting everything we’re working on into the game, Neyman said. I think we have a lot of potential this season.

Tabor 4, Loomis Chaffee 1 Twins Ava and Kayla McGaffigan each had two goals and Juliette Piersol provided three assists to lead the Seawolves (2-0) to the nonconference victory.

Bishop Rod 5, Matignon 3 The Spartans took their first win of the season at the foot of junior Nico Ferreira, who found the back of the net four times. Pedro Conceicao scored another goal for Stang (1-2-0) in Catholic Central’s win.

Newton North 7, Andover 0 Senior Sam Greenwald and junior Duncan Naylor shutout in goal together when the Tigers (3-0-1) took the nonleague-victory.

Wellesley 2, Newton South 2 Jonas Wachman-Goncalves and Kamar Burris-Kahn each scored a goal for South in the tie.

Notre Dame (Hingham) 7, Brockton 0 Two days after tallying 6 goals against Ursuline, sophomore Sydney Comeau scored 3 more in the non-league win for the Cougars (5-0). She has 18 goals in five games.

Rivers 1, Phillips Andover 0 The Red Wings won their first game of the season on a goal from freshman Abigail Lorion.

Woburn 2, Stoneham 1 Junior Cyndea Labissiere scored both goals for the Tanners (1-0-1) in the Middlesex Conference win.

Nantucket 3, Falmouth 0 Freshman setter Bianca Santos scored a total of 15 assists in the Cape & Islands win ahead of host Whalers (3-2).

Amherst By invitation With Harrison Dow third and Wes Kleiman fourth, the Concord-Carlisle boys took first place overall in the 25th Amherst Invitational at Hampshire College. And with the Patriot girls in third, CC captured Crowley Cup as the top performing school.

Williston Northampton 18, Kent 44 William Chalfant finished in 19:39 and Connor Queenin finished in 20:15 to finish first and second ahead of the host Wildcats.

Williston Northampton 18, Kent 45 Elle Ashe and Lucy Hoyt finished first and second for the Wildcats in the win.