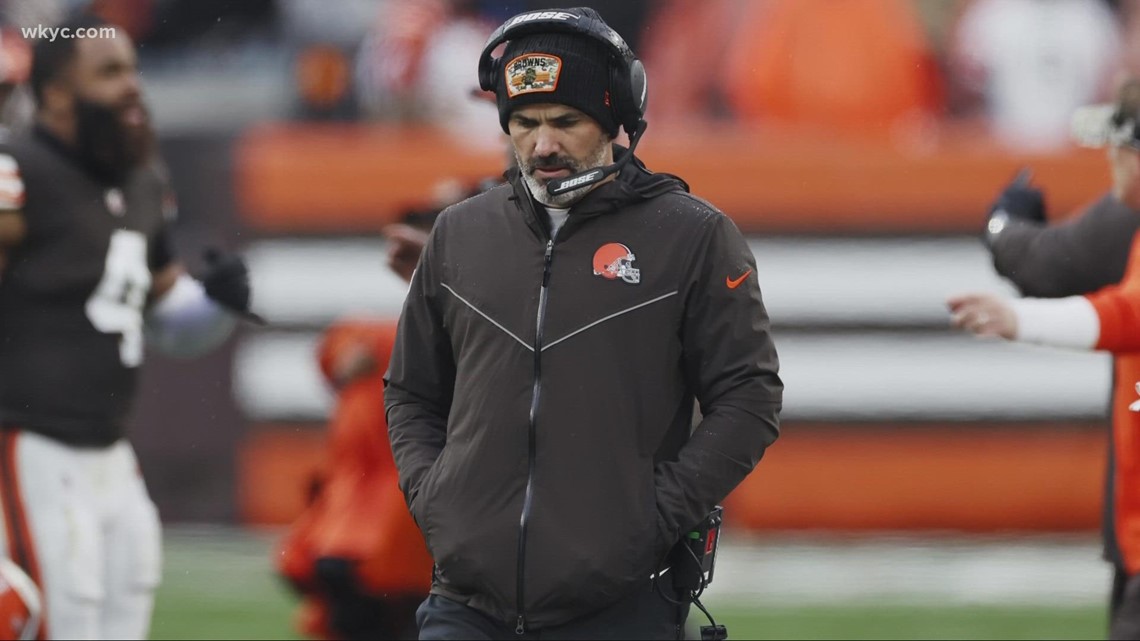 “At least can we all agree that no one would fight to take yesterday’s win to the prom?”

CLEVELAND After yesterday’s 13-10 win over the hapless Lions, coach Kevin Stefanski said: “There is no such thing as an ugly win.”

But even if we accept that logic and allow that because it was a win it can’t be considered “ugly” by definition, can we at least all agree that no one would fight for the win? from yesterday to the prom?

That wasn’t a relaxing viewing experience from a Browns fan’s perspective, and I don’t feel it had to be so gripping.

The good news is that the Browns defense recovered nicely after being destroyed in New England last week, but while Denzel Ward and Malcolm Smith both had nice interceptions, the real MVP for our defense was Lions backup quarterback Tim Boyle in his first NFL start.

He loved to play with it. He was pretty bad. The Lions are pretty bad.

Speaking of quarterbacks, I don’t think it made sense to start Baker Mayfield yesterday.

Let’s sum this all up: you know you’re playing against the scoreless Detroit Lions and they’re very, very bad. You know that your quarterback is dealing with several injuries that are clearly affecting his mobility and ability in the game. You have one of the highest paid backup QBs in the league in Case Keenum, someone who has already proven himself this year by starting and winning a game against the Broncos, a much better team than the Lions, who are very bad .

So why start with Baker yesterday?

There is a lot of talk about toughness. Baker is hard to bear and want to be out there, which is admirable and unsurprising. We get it, Baker is tough. It’s one of the things we love about him.

But there are different kinds of ‘toughness’. It takes physical strength to endure multiple injuries in the NFL; It takes intellectual and emotional toughness to be able to say to yourself, “Even if I can play physically, it might be best for the team in both the short and long term that I step back and recover for a week, to put us in a better position for the rest of the season.”

But that wasn’t the final decision and Baker played stumbling, and in the end he played like he stumbled. This even resulted in hearing that some Browns fans booed Baker a few times, or at least booed the Browns for leaving an obviously injured Baker in the game when he shouldn’t have been there.

First of all, don’t do that, Browns fans. Come on. I get it, you’re mad at how they play, and you’re full of Miller Lite and White Claws and you feel the need to voice your displeasure. Fine, but don’t berate the guy who plays injured who also happens to be the first quarterback to win a playoff game for your team in about 30 years. Relaxed.

Now some advice for the insanely passionate “Baker Bro” supporters who act like any criticism of their “holy idol”, however minor or logical, is a kind of heresy to be condemned and shamed. You know the guys I’m talking about:

“Don’t you dare say anything bad about Baker Mayfield! He is the promised who was prophesied and we will not tolerate dissent! He is impeccable and perfect and he is my oxygen! I have two sons and a daughter and they are ALL called Baker!”

In case I wasn’t clear, I don’t think Baker should have started yesterday. Not because Case Keenum is a better quarterback than Baker, but because I think he would have been the better quarterback yesterday, because Baker’s body was destroyed. He left yesterday’s game more defeated than he entered. That wasn’t necessary.

But I don’t blame Baker for playing when he probably shouldn’t. Ultimately, I have a complaint about Coach Stefanski, because he should be the adult who makes the call to tell his quarterback he’s not starting, even if he wants to start, for the sake of the team. Even if Baker says he’s fine, even if the training staff acquitted him, saying, “Technically, he still has movement in most of his limbs and can physically play football,” that’s not a green light. That is a yellow light that quickly turns red.

Of course this would all be so much worse if we had lost that game yesterday, which we certainly would have done under similar circumstances three or four years ago, so I can’t be that mad at how that turned out. I will honor Coach Stefanski’s wishes and I won’t refer to what I saw yesterday as “ugly”, but I certainly won’t be revisiting that for fun anytime soon.

Heal, players and fans, because a double shot from the Ratbirds awaits us. Go Browns.