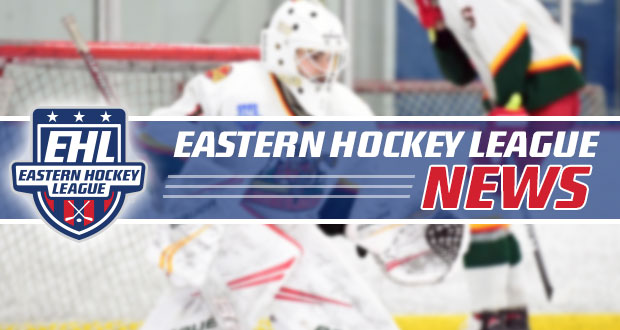 The Eastern Hockey League held its first-ever All-Star tournament, featuring four teams of 68 players from across the league.

Over the span of two days, the four teams – Red, Blue, White and Gray – played three round robin games, followed by a consolation and championship game. Each team consisted of 15 skaters, two goalkeepers and two coaches from each division, and all games followed a format of two 20-minute periods.

Round Robin Day One

On Saturday, four games were played, meaning each team started the All-Star showdown with two games each. Team Red started with a 3-2 win over Team Blue, as Apple Core attacker Colby Walters scored a goal plus an assist. In the second period, Walters hit a rebound that turned out to be the game winner.

Then it was Team Gray and Team White’s turn and for much of the first period, the game remained scoreless. Adam Zukowski of the Boston Jr. Rangers finally broke through for Team White at 5:22 PM of the first period, and it stood as the winning goal. Team Maryland goalkeeper John Advertiser and Apple Core netminder Jackson Bernard combined for a shutout, stopping all 21 shots by Team Gray.

Team White went straight back on the ice to face Team Blue, and fatigue didn’t seem to be an issue as the teams went into the break with a 1-1 draw. However, the blue team continued in the second period and Walpole Express forward Anthony Persia scored a goal and an assist in the second period to lead Team Blue to a 3-1 victory over Team White.

The first day ended with Team Red and Team Gray, and it looked like Red was going to take the game. New England Wolves ahead Kevin Johnston and Vermont Lumberjacks ahead Louis-Joseph Guernon scored in the first period to give Red a 2-0 lead and Philadelphia Little Flyers forward Adam Beauvais another goal to extend the lead to 3-0.

Just when it seemed all was lost for Team Gray, they reacted with four unanswered goals and scored six of the next seven goals after trailing 3-0. Colin Bella scored a hat-trick while Alex Raketich, Robbie Seewagen and Aden Hotchkiss also found the back of the net in their 6-4 win.

Each team went 1-1 on the first day, meaning the winners of the last two round robin games would advance to the championship game. Team Blue and Team Gray started day two and it was Blue who jumped forward early and never looked back. They scored four goals in the first half, including one from Railers defender Tyler Drummond that finished off a nice passing game with the Boston Jr. striker. rangers Jack Karges and Seahawks ahead Will Crowley.

East Coast Wizards Ahead Jake DiNapoli, who scored once in the first half, netted two more goals to complete the hat-trick and help Team Blue advance to the championship game with an 8-3 win.

Team Red came out strong in their third round from Robin and jumped to a 4-0 lead over Team White in the first half with two goals from Little Flyers striker Adam Beauvais. Seacoast Spartans ahead Colin Marks and Valley Jr. Warriors ahead Billy Hartnett added a goal and assisted each as Team Red advanced to a 6-2 win.

The comfort game featured Team White and Team Gray, and Connecticut RoughRiders ahead Calyb Reeves scored twice for White as they jumped to an early 2-0 lead. As with their comeback on day one, Team Gray responded with five unanswered goals, including three from New Hampshire Avalanche forward Hotchkiss. Bella scored a goal and an assist in the 6-4 win, leading the tournament in points with 9 (5g, 4a) in four games.

In the championship game, Team Blue again came out strong and jumped to a 3-0 lead over Team Red. DiNapoli, Crowley and Spartans ahead Cooper Board found the back of the net in the first half, while Johnston scored for Team Red to narrow the deficit to two.

Apple Core Defender James Mettler narrowed the deficit to one with a goal 38 seconds into the second half, but Team Blue held on with strong goaltending from Walpole Express netless Jack Boschert. He made 29 saves on 31 shots when Team Blue – led by Wizards head coach Kory Falite and Jr. Warriors coach Ryan McGrath – won the first annual EHL All-Star Classic.

EHL Associate Commissioner Neil Ravin spoke of the importance of holding an All-Star even for the league, noting the talent of the players representing all 17 EHL teams.

“Adding this event to our calendar this season gave me a tremendous sense of pride knowing that we would be giving 68 of the players in the EHL a chance. The final result proved how much equality there is in our league as we continue into our ninth season,” Ravin said.

“Every year we pay more and more attention to our players, and this new event is just the latest example of that commitment. Coming soon will be NCAA commitments for many of the players who participated. ”