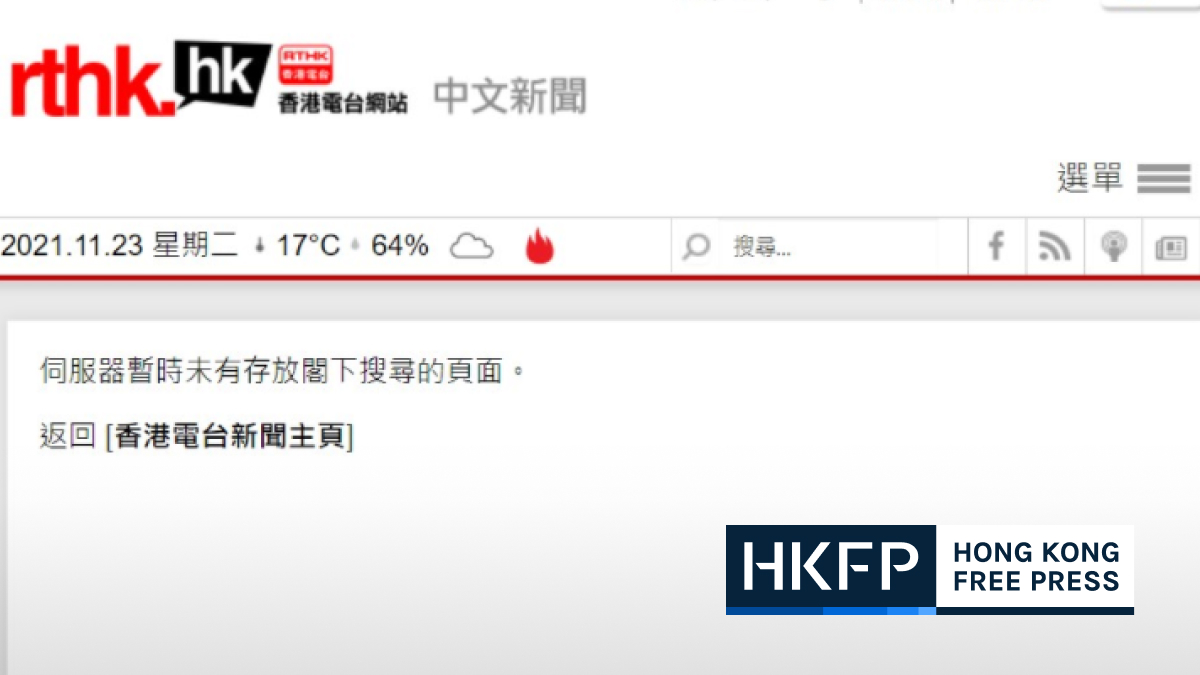 Hong Kong government-funded broadcaster RTHK has removed from its website a news story about Chinese tennis star Peng Shuai accusing a former top Chinese official of sexual assault. The taxpayer-funded outlet’s move reflects the treatment of the story in mainland China, where it has been censored.

Peng, who once topped the world rankings and is the only Chinese player to have done so, claimed on social media that she was sexually assaulted by former Deputy Prime Minister Zhang Gaoli.

The accusation made headlines in international media and was quickly wiped from the Chinese internet when Peng disappeared from the public eye, raising concerns among the Womens Tennis Association (WTA) and other famous players about her safety. China says the feud is being deliberately and maliciously instigated.

The headline of the original RTHK report quoted Western media outlets as saying they had been unable to contact Peng since early this month. The report also said Chinese media published an email allegedly sent by Peng reporting that she was resting at home, the authenticity of which has been questioned by the WTA chief.

First published online, the original November 18 report can no longer be found at its original address. A cached version of the page temporarily stored on Google that allowed users to view previous versions of web pages was accessible Monday evening, but was no longer accessible Tuesday.

While the feud has made headlines around the world, many other local outlets have either ignored it or haven’t mentioned the name of the accused.

In response to questions from HKFP, RTHK said on Tuesday it will not comment on internal editorial matters and is committed to accuracy.

Last month, it declined to say why it had removed a story from its website about proposals for a new law that would criminalize insults against government officials.

The delisting is the latest controversy since a new Broadcasting director with no previous media experience took over in March. Since then, RTHK has also scrubbed its online archives, cleaned up and restricted its Twitter account, launched a chat show hosted by Chief Executive Carrie Lam, and issued guidelines for staff to use Beijing-approved wording.

Lam has also announced a partnership between the broadcaster and Chinese state media CCTV to broadcast more mainland-produced shows to instill a sense of patriotism in Hong Kong viewers.

RTHK has seen an anexodus of senior editors since the change of leadership, with ex-TV presenter and veteran journalist Steve Vines fleeing the city in August.

In September, RTHK passed new guidelines stating that it must uphold the constitution while staff must avoid contact with foreign governments or political organizations. The public broadcaster promised in the new editorial guidelines to prevent acts that endanger national security.

The changes come amid growing concerns over the state of press freedom under Beijing-imposed national security law, as authorities pledge to roll out a fake news law. The city’s press group has warned that press freedom is in tatters after a crackdown on the now-defunct Apple Dailynewspaper.