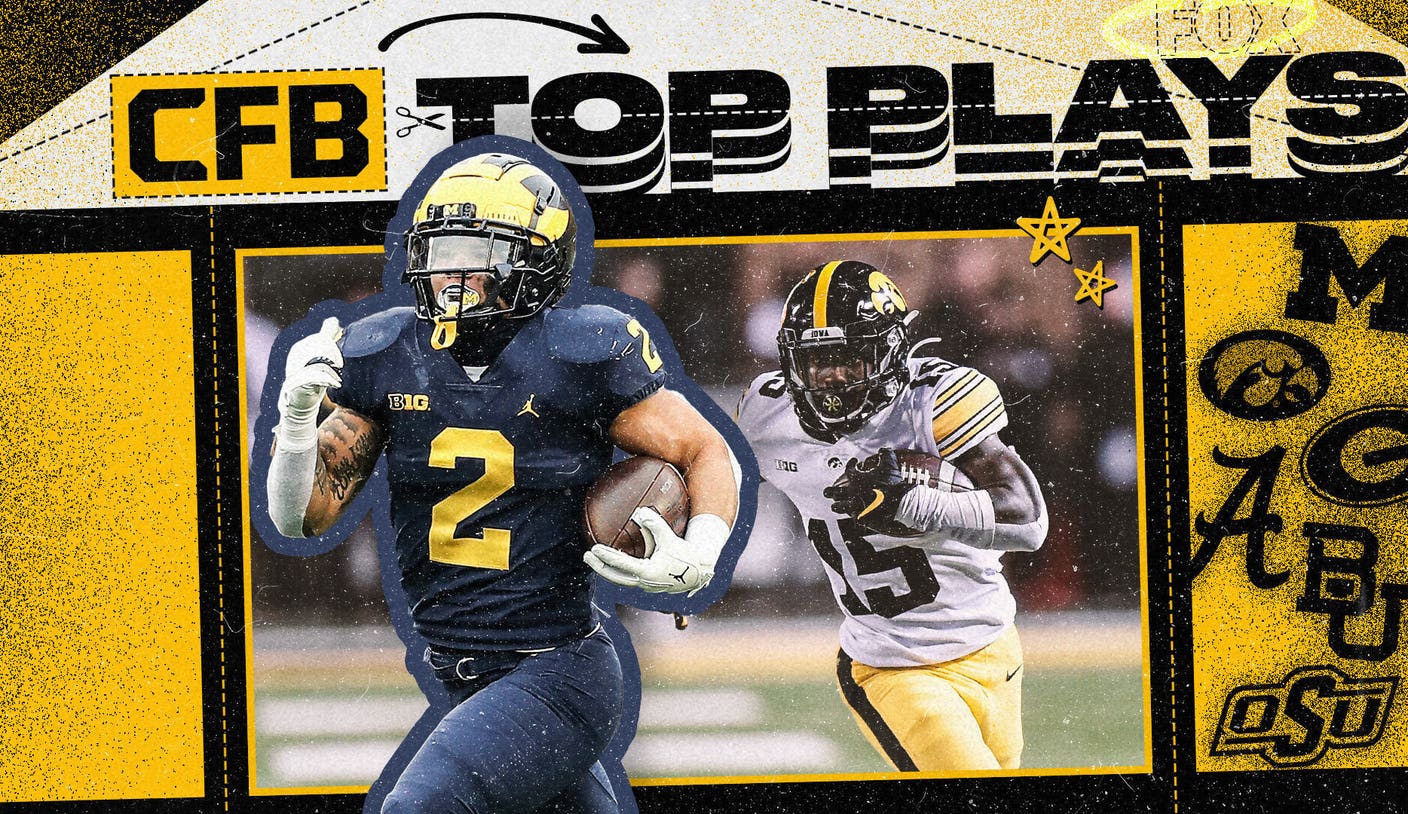 college footballWeek 14’s schedule was small but powerful. It’s championship weekend after all.

Kicking off Friday in Las Vegas, No. 17 Utah defeated No. 10 Oregon 38-10 in the Pac-12 Championship Game, hitting his ticket to the Rose Bowl. The win came less than two weeks after the Utes challenged the then-No. 3 Ducks for a College Football Playoff berth.

Saturday started with a bang as No. 9 Baylor came up with a rushing goal line to secure a 21-16 win over No. 5 Oklahoma State in the Big 12 Championship Game, while Utah State No. 19 San Diego State 46 upset -13 in the Mountain West title game.

These are the highlights of the championship weekend.

The Hawkeyes came empty on their first possession in the red zone and missed a field goal early in the first after barely missing the end zone on their opening stage. Then Blake Corum broke out on this 67-yard TD with a lot of help from Wolverines QB JJ McCarthy.

Michigan added a second score in the first quarter on this trick play as Donovan Edwards ran back and launched this 75-yard TD pass to take out Roman Wilson wide to give the Wolverines a 14-3 lead and go into the break .

It was more of the same for Michigan in the second half, as Hassan Haskins hit back-to-back TDs.

In the fourth, tight end, Erick All pulled in a short pass from Cade McNamara as the Wolverines took an impressive 35-3 lead.

Michigan added a fourth quarter score for good measure, and that’s where it ended, 42-3.

The Panthers were first on the board after QB Kenny Pickett broke out for a 58-yard (!) TD run after faking a slide on Pitt’s first ride of the night.

Wake Forest’s Sam Hartman found AT Perry for a quick TD to get things right early in the first row, but Pitt had other ideas. Mid-frame, Pickett threw his second TD of the night, scoring his 80th career touchdown pass and surpassing Dan Marino for most in school history.

All gas, no brakes

Before the break, Pitt leveled things up again, thanks to this acrobatic catch from Jared Wayne, before adding a field goal to take a three-point lead, 24-21, to close out the first half.

Pitt got the score going in the second half thanks to back-to-back TDs courtesy of Israel Abanikanda. Next, the Panthers defense picked out Hartman and gave it back 19 yards for one more score to seal the deal.

Georgia struck first and led 3-0 in the first at bat. The Bulldogs picked up where they left off in the second, when Stetson Bennett hooked up with Darnell Washington for the first Georgia TD of the day.

The Crimson Tide bounced back in the second frame in a big way. First, Bryce Young found one of his favorite targets, Jameson Williams, for a monstrous 67-yard TD to make it a three-point game.

On Alabama’s ensuing drive, John Metchie III pulled in this pass to give the Tide a 14-10 lead.

Georgia evened things out before the break, thanks to this problem from Ladd McConkey, good for a Bulldogs TD.

But with 26 seconds left, Alabama regained the lead after Young took the lead himself on this 11-yard run.

Young found Williams again, this time for a monstrous 55-yard TD to put the Tide at 31-17 in the third.

Then the Alabama defense came with a massive interception, knocking out Bennett in the red zone.

In the final frame Stetson was eliminated again. This time, 42 yards were returned for a Crimson Tide TD.

holding on to it

Georgia made it a two-goal game early in the fourth, but that wasn’t enough to spark a comeback. Alabama added a field goal late in the frame and that’s where it ended, 41-24.

Houston marched into Cincinnati territory but got stuck in the red zone to open the scoring. The Cougars took an early 3-0 lead, but Desmond Ridder found Tyler Scott for a 25-yard Bearcats TD to take over in the first.

The Cougars recaptured their lead on this dazzling 16-yard TD pass from Clayton Tune.

Jerome Ford found an opening and went the distance 79 yards for a Bearcats score.

Heading into the break, it was a one-point game, 14-13, after Houston scored a 46-yard field goal.

It was all Cincy in the bottom half, as Ridder threw three touchdowns in seven minutes to give the Bearcats a 35-13 lead halfway through the third.

Tune linked up with Jake Herslow for a Cougars TD to narrow Houston’s lead to 35-20, and that’s where it ended.

USU made it a two-point contest after this Calvin Tyler Jr. short bum.

Heading into halftime, Utah State led 14-3 after the Aztecs added a field goal in the final minute of halftime.

Brandon Bowling pulled in this 58-yard pass from Bonner to open up the second half, finishing a 5-play, 75-yard drive with an Aggies TD.

Then USU moved up 23-3 after blocking its second run of the day:

It was more of the same for Utah as the second half unfolded, with one big game after another

Including this great TD catch from Bowling, his second of the day.

In the final frame, Utah State took a whopping 33-point lead after Bonner threw his fourth TD pass of the day.

The Aztecs eventually got their first TD in the fourth, but it was too little, too late and it ended 46-13.

JT Woods knocked out Spencer Sanders, who set up the first score of the match with a short TD pass from Blake Shapen to Ben Sims.

Midway through the first, the Bears got away with another crucial takeaway:

Baylor increased the lead to 14-3 on this doozy throw to Drew Estrada.

In the bread basket!

Shapen made a great MVP case in the second frame.

Baylor’s defense has a message: don’t throw at us!

It certainly took a while, but in the third quarter, Oklahoma State finally found its way into the end zone.

Not in our house

Boy, did this game have its fireworks. It came down to a final fourth-and-goal game as sixth-year senior Jairon McVea kicked his speed into overdrive to stop Dezmon Jackson, who rushed to the pylon in an attempt to score the game-winning TD.

The Utes dominated the Ducks in their regular season meeting and they started Friday night’s game in a similar fashion by taking a 7-0 lead on a short run from Tavion Thomas.

It was only about six minutes later that Utah struck again, this time when Devin Lloyd plucked an Anthony Brown pass and returned 34 yards for a touchdown.

The Ducks caught a break when linebacker Noah Sewell whose older brother Nephi Sewell plays the same position for Utah, and whose oldest brother Penei Sewell was the No. 7 overall pick in the 2021 NFL Draft intercepted an interception early in the second quarter. But the Ducks got away with nothing after the ensuing drive ended with a missed field goal.

On Utah’s next drive, the Ducks’ defense knocked out Cameron Rising again. This time it was all thanks to the acrobatics of safety Verone McKinley III. But again, Oregon was unable to take advantage of the takeaway, and the Ducks threw it away after three-and-out.

After back-to-back interceptions, the Utes were able to get back on track as the first half came to a close, finishing a 12-play, 74-yard drive with a Utah TD courtesy of tight end Dalton Kincaid.

Utah extended its lead to 23-0 at the break tied for the biggest halftime lead in Pac-12 Championship Championship history as Utes got a last-second field goal after Browns second INT.

Oregon avoided the shutout with a field goal early in the third to make it a 20-point game. But halfway through the frame, the Utes struck again.

Rising broke out for a 41-yard gain, and TJ Pledger hit it in the next game for a TD. The Utes QB added a two point conversion for good measure as Utah took an impressive 31-3 lead going into the final frame.

Utah kept the scoring going in the fourth, when Thomas found the end zone on a short bum to put Utah at 38-3. Oregon finally answered with its first TD of the night thanks to a quick 2-yard run from Travis Dye, but it was too little, too late and that’s where things ended.

THE BEST OF THE REST:

Levi Lewis proved the Ragin’ Cajuns were a force to be reckoned with when they were cut short on this 56-yard TD run, as Louisiana took a 14-0 lead.

How about this wild kick-off return from Jackson State’s Isaiah Boldon?

Get more out of College Football Follow your favorites for information about games, news and more.

Eileen Ash: Oldest ever test cricketer – who played for England on both sides of WWII – dies aged 110 | british news