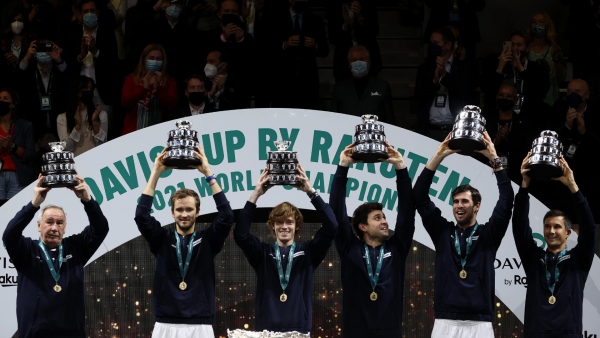 The International Olympic Committee says it has met Peng Shuai for the second time and will hold a “personal meeting” with the Chinese tennis star in January over ongoing concerns about her safety.

In a statement released on Thursday, the Olympic body reiterated an earlier report that it was following a “silent diplomacy” route and spoke with Chinese sports authorities about what it described as “the difficult situation it finds itself in”.

Peng in November made allegations of sexual assault against Zhang Gaoli, the ex-Deputy Prime Minister and member of the Standing Committee of the Chinese Communist Party’s Politburo. The two-time Grand Slam doubles winner posted the allegations on social media site Weibo, though her post has since been deleted and her whereabouts have since been unclear.

The WTA, which hosts the premier women’s tennis tour, suspended upcoming tournaments in China on Wednesday over lingering concerns over Peng’s well-being.

An email allegedly sent by Peng was recently received by WTA chairman Steve Simon, saying that the sexual assault allegations were false and that the tennis star was home safe. Simon said e-mail only exacerbated his concerns about Peng’s safety.

International Olympic Committee (IOC) president Thomas Bach was photographed with Peng via video link last month, and now the IOC says further contact was made with the 35-year-old former French Open winner on Wednesday and the Wimbledon doubles.

The IOC said: “We share the same concern as many other people and organizations about the well-being and safety of Peng Shuai. Therefore, an IOC team held another video call with her yesterday. We have offered her broad support, will be in regular contact keep with her and have already arranged a personal meeting in January.

“There are several ways to achieve her well-being and safety. We have taken a very human and person-centred approach to her situation. As she is a three-time Olympian, the IOC is addressing these concerns directly with Chinese sports organizations.

“We are using ‘silent diplomacy’ which, given the circumstances and based on the experience of governments and other organizations, is seen as the most promising way to act effectively in such humanitarian cases.

“The IOC’s efforts led to a half-hour video conference with Peng Shuai on Nov. 21, in which she explained her situation and appeared to be safe and sound given the difficult situation she is in. This was reaffirmed in the call from yesterday. Our human and person-centered approach means we will continue to be concerned about her personal situation and continue to support her.”

Beijing, the capital of China, will host the Winter Olympics in February. There could be an increased focus on Pengs if the situation is not satisfactorily resolved by then.

There is no suggestion that there is any doubt about the Games due to global concerns over Peng, but the women’s tennis tour will not visit China for the foreseeable future, barring a change in circumstances.

WTA chairman Simon said on Wednesday: “I don’t see how I can honestly ask our athletes to participate there if Peng Shuai is not allowed to communicate freely and is apparently pressured to contradict her allegation of sexual assault.”

WhatsApp announces multiple time periods in “disappearing messages”: Here’s how to enable it: