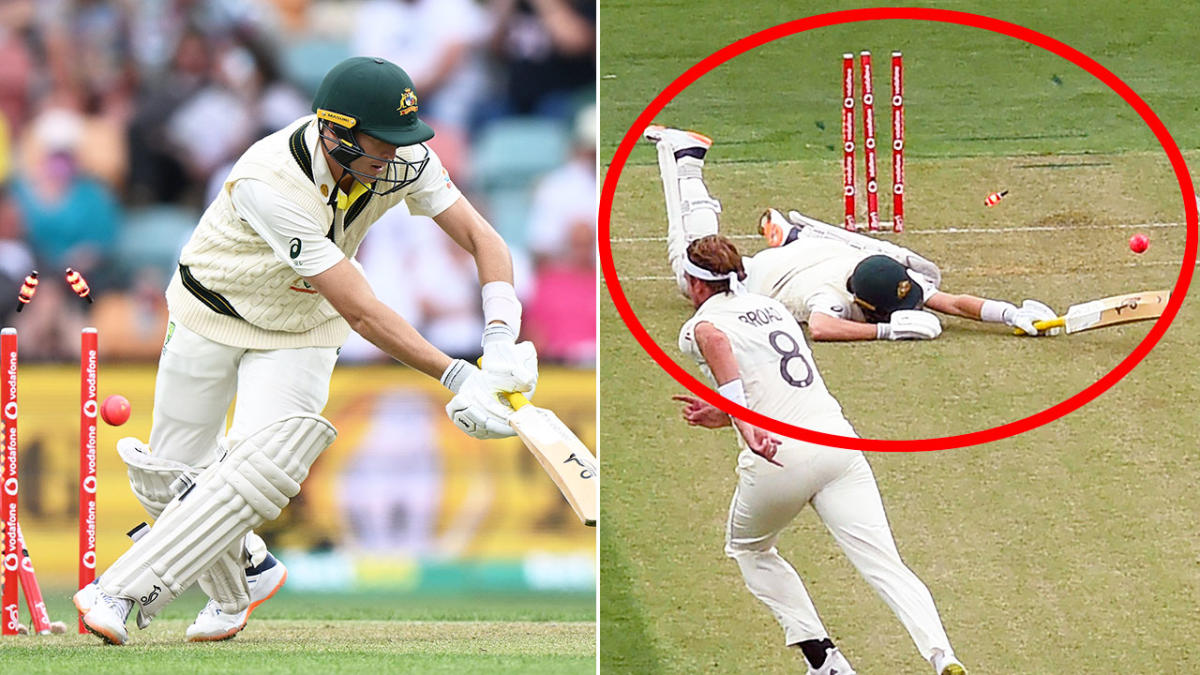 Marnus Labuschagne has hilariously dug into himself after leaving the cricket world stunned with one of the most bizarre layoffs in recent memory.

The Aussie batter fell for 44 in the fifth Ashes Test in Hobart on an opening day with teammate Travis Head calling his second century of the series.

Head’s sublime century took Australia to 6-241 on an eventful opening day that saw the home side’s top order crumble in a horror start.

The Aussies crashed to 3-12 in 10 overs on a green field after losing the toss, reliving their nightmarish start to the previous test at Bellerive.

But there was no meek collapse to match the chaos of 2016.

Instead, a counter-punching Head humiliated the English bowlers with help from Labuschagne and Cameron Green.

Labuschagne’s good work was largely undone by a moment of madness that dominated the ‘highlight’ roles from day one.

Replays made the 27-year-old look like a comedic figure as his legs tangled and he ended up in a heap on the pitch, his stumps shattered by the Broad delivery.

To his credit, Labuschange took a crack at himself after posting a photo of the disastrous moment on social media.

How are you doing today? Yeah, I just got a good one,” he captioned the hilarious gaffe.

England great Michael Vaughan said in Fox Sports commentary: I’ve never seen this in Test cricket. The opening session of a test match… he just falls over, he trips over his own feet.

Michael Hussey added: That is one of the most bizarre layoffs you will ever see in Test cricket.

Fellow Fox Sports commentator Brendon Julian weighed in: I just doubt he would have gotten it anyway. He was so far across the street that he had to come right back. Obviously falling over didn’t look good, (but) Broad thought so!

Vaughan continued: I’ve never seen this in cricket, let alone Test cricket. On the first session of a test match. He’s got that left foot (so far across), he’s going over it because he’s slipping, but where did he go!?

Centurion Head said he was “bitterly disappointed” to fall for 101 after giving Ollie Robinson a catch immediately after celebrating his second hundred of the five-Test series.

The southpaw, forced to miss the SCG test after contracting COVID-19, nevertheless changed the momentum in a stunning way that belied Friday’s opening hour, in which the pink ball dominated the bat.

“Anything over 300 will be a good start,” Head said, when asked what the first innings total it might take to win a 4-0 series.

Head shared a 71-run partnership with Labuschagne, which bizarrely ended in the penultimate over of the opening session, then a 121-run tie with Green.

Green’s sacking at 74, in what turned out to be the third-to-last left of the day after rain resulted in stump pulling after 59.3 overs, will give England hopes of clearing the tail quickly on Saturday.

But the tourists, who missed the golden opportunity to sack Labuschagne (44) for a duck during the early carnage, have already squandered their hopes of narrowing Australia down to a much smaller total.

The Head-inspired comeback was the last reminder of Australia’s depths this summer, after recalled paceman Robinson removed David Warner and Steve Smith for ducks in an inspired opening spell.

It was the first time that Warner and Smith both failed to harass the scorers in a Test innings.

Green was in the box to post his first Testton before picking out Zak Crawley with his deep square leg and falling victim to Mark Wood’s short ball trick.

Wood, otherwise England’s most impressive pacesetter on this tour, recorded numbers of 1-79 from 11.3 overs to prove England’s least frugal bowler.

Crawley held on for three catches, but took the edge that Labuschagne offered in the eighth, after diving for Joe Root on the first slip.

Robinson, who trudged to the locker rooms with a sore back but returned to the field, delivered just eight overs.

PM Modi urges students and parents to register on mygov.in