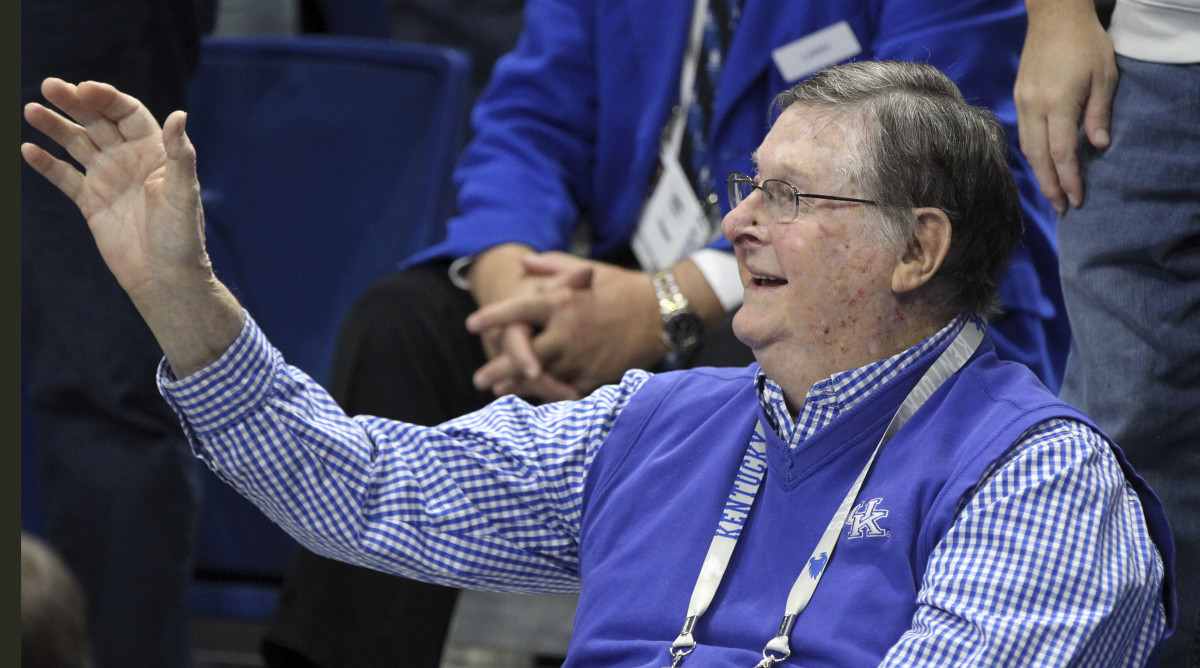 LEXINGTON, Kentucky (AP) — Joe B. Hall, who succeeded Adolph Rupp and led Kentucky to a national championship in 1978, has died. He was 93.

The program announced Hall’s death in a post on social media Saturday morning after the coach’s family notified current Wildcats coach John Calipari. Hall and Calipari were close, and Hall regularly attended practices and games in Kentucky. The retired coach sometimes gave the “Y” when cheerleaders spelled the state name during timeouts.

Calipari, who led Kentucky to the program’s eighth national title in 2012, called Hall “my friend, my mentor, and an icon in our state and in our profession.” in a series of tweets. He said he visited Hall this week and added that the coach squeezed his hand tightly as Calipari prayed for him.

Hall went 297-100 in 13 years with Kentucky. Born 20 miles north of the Lexington campus in Cynthiana, Ky., the former British player and longtime assistant to Rupp took on the monumental task of succeeding his boss in 1972 after Rupp was forced to retire as he turned 70. became.

The Wildcats were 20-8 in Hall’s first season, but followed that up with a 13-13 campaign, their worst record in 50 years. He eventually led them back to national fame and the pinnacle of college basketball six years later.

Led by Kevin Grevey, Jimmy Dan Conner and Rick Robey, Kentucky reached the Final Four in 1975, its first appearance since 1966. The Wildcats lost the 92-85 championship game to UCLA in Coach John Wooden’s final game with the Bruins.

Three years later, Hall and Kentucky earned another banner to hang from the rafters of the Rupp Arena, which was named after the longtime coach and opened in 1976.

The Wildcats went 30-2 to win their first NCAA title in 20 years, beating Duke 94-88 in St. Louis behind Jack “Goose” Givens 41 points. It was Kentucky’s fifth championship and its first in 20 years. More than 10,000 fans greeted the returning team at Blue Grass Airport.

The program also reached the Final Four in 1984, losing to Georgetown in the national semifinals. Hall retired a year later at age 57.

As difficult as it was to succeed Rupp — who won 876 games in 41 years as Kentucky’s coach — Hall said it was made possible by following the example of the “Baron of the Bluegrass.”

“I fell in love with the Kentucky program before coming here as a student and playing under coach Rupp, coming back and assisting him for seven years,” Hall said. The Associated Press in 2017. “I was imbued with a spirit that made some players work harder. And I think that made me work harder.”

Hall coached 24 players called up to the NBA, including five first-round selections. He was named national team coach of the year in 1978 and SEC Coach of the Year four times. Seven of his players earned 11-time All-American honors.

The bespectacled coach wearing a bright checkered sports jacket on the sidelines is immortalized with a statue outside the players’ dormitory depicting him sitting on a folding chair with a tight grip on a game show.

Hall’s homey manner and Southern accent were featured for years on a daily morning radio show he hosted with rival and former Louisville coach Denny Crum. The men often discussed their love of fishing, hunting and, of course, basketball. Although they poked each other about the intense Bluegrass rivalry, there was also mutual respect and admiration for each other’s successes and especially the struggle to build their programs.

Hall briefly played for Rupp and the Wildcats in the 1940s before transferring to the University of the South. He toured Europe with the Harlem Globetrotters in 1951, returned to the UK and graduated in 1955.

His coaching career began in 1956 at Shepherdsville High School. He went on to coach at Regis College in Denver, where he went 57-50 in five seasons, and Central Missouri State, where he went 19-6 in 1965. Rupp hired Hall as an assistant in July of that year.

Finland, Sweden and Norway will exterminate the wolf population | CONSERVATION

Google help documentation is not always up to date