The British No. 4 became the last athlete to support Stonewall’s Rainbow Laces campaign by wearing them on Tuesday during his Australian Open first-round defeat to Nick Kyrgios in Melbourne; the campaign aims to raise awareness of LGBTQ+ inclusion in sport

Liam Broady says he doesn’t think men’s tennis has a specific “culture” that prevents players from coming out as gay or bisexual after wearing Rainbow Laces at the Australian Open to “support” the LGBTQ+ community.

Britain’s No. 4 men’s team, Broady became the last athlete to back Stonewall’s Rainbow Laces campaign by wearing them during his first-round defeat to Nick Kyrgios in Melbourne on Tuesday.

Designed to raise awareness of LGBTQ+ inclusion in sport, the initiative is supported by: air sports, along with the Premier League of English football and many athletes in other sports.

During his post-game press conference, Broady explained that the absence of gay or bisexual players on the professional men’s tour makes it more important for people like himself to support the LGBTQ+ community.

“I really just wanted to steer the support,” Broady said, when asked about wearing the laces.

“I know of course that within men’s tennis – is it a taboo? I don’t think it’s really taboo, but I’ve seen questions before about why there aren’t openly gay men on the tour, and I just wanted to be kind of voice my support in that general area.

“And the LGBTQ community, I mean, a lot of those guys have been very supportive throughout my career and have been there since day one, so I wanted to thank you in my own way.”

When asked if he thought there was a culture on the tour that prevented players from coming out, Broady said: “I don’t think so. I think the society we live in has such a culture, right? Especially in the sport.” 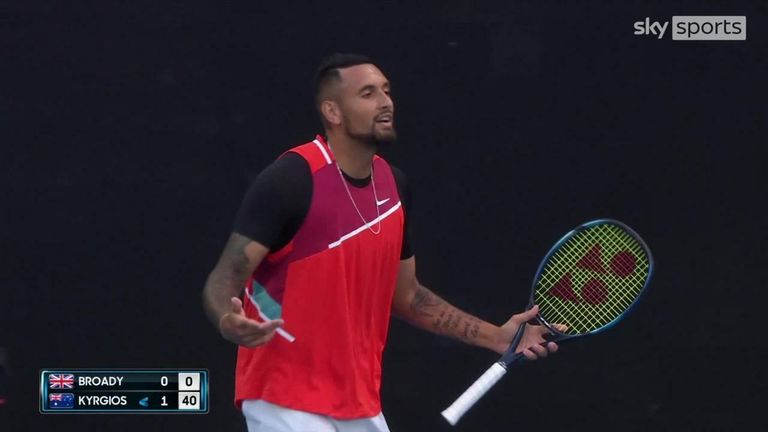 Broady used the example of Australian footballer Josh Cavallo, who came out last October, as proof that problems for LGBTQ+ people in sport are not limited to men’s tennis.

“I saw the first openly gay footballer just come out in Australia. And it’s hard, right? I mean, it’s a great thing to do and at the end of the day in the 21st century, it’s pretty bullshit that people don’t feel like they can be openly gay it’s actually quite sad.

“If there are people in the locker rooms and you… you don’t want to force them to come out, you know, especially if they don’t want to. It’s their choice. So you just have to try to support on the way you can and just let them know that everything is okay.”

Sky Sports is a member of TeamPride which supports Stonewall’s Rainbow Laces Campaign.