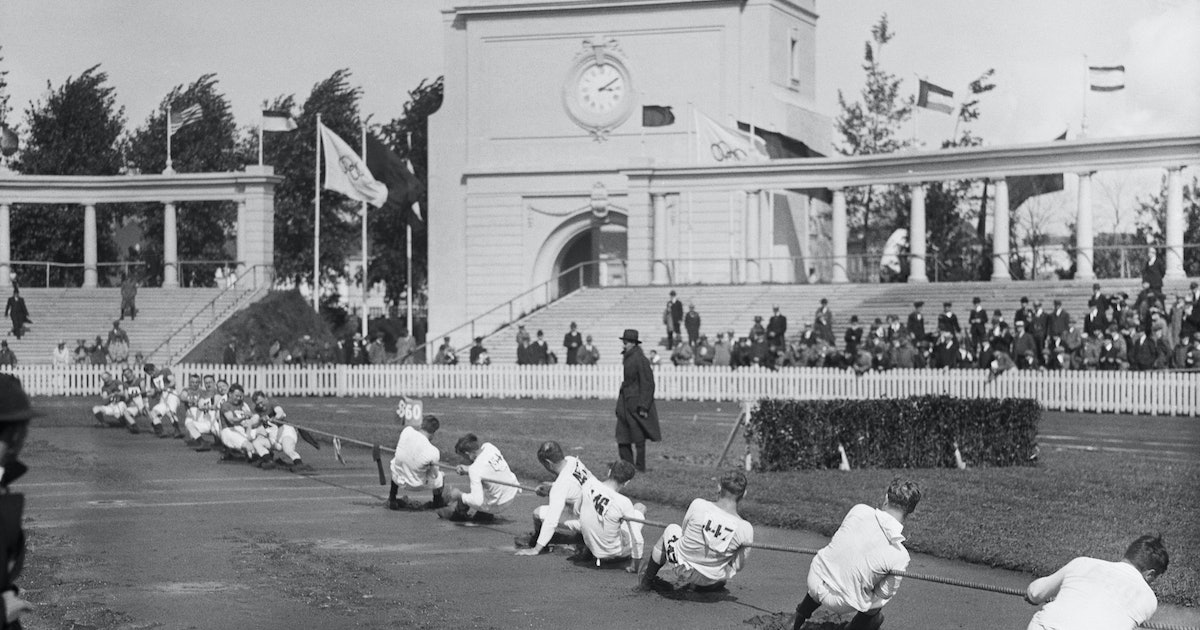 While the Beijing 2022 Winter Olympics continues the long tradition of captivating the world’s attention, curious viewers may find themselves in the very specific mood that arises once every two years when watching any Olympic Games-related film and the look up incredibly random Olympic history and trivia. “Which country has won the most Olympic medals?” “What is the most dangerous Olympic event?” “What Are Some of the Most Obscure Olympic Events?” (The latter will send you down an internet rabbit hole). To the surprise of most people, there have been some very strange events in the past. To satisfy your curiosity and build your knowledge of Olympic trivia, here are some seriously weird Olympic sports that no longer exist. Spoiler alert: It’s not hard to figure out why most of them have been phased out.

To many casual Olympic viewers, the idea of ​​combining cross-country skiing with target shooting seems like an incredibly random combination of talents. And yet the biathlon is very much alive during the Winter Olympics. And many people remain baffled that table tennis is an Olympic event and a very competitive one. But in addition to these potentially confusing but well-accepted events, there are some now-defunct events that were simply bizarre.

Here’s a look at 11 Summer and Winter Olympic Sports That Don’t Exist and Honestly Anyone Can Do Without It.

Everyone knows the athletic event of long jump, which usually involves very tall, leggy people running and then jumping as far as possible into a sandbox. But also horses once gave their best in the sport. The first and only time the horse long jump was held was during the 1900 Summer Olympics in Paris and it is doubtful it will make a return even if the Summer Games return to Paris in 2024. The majority of horses could make it at least 14 feet. And the winning jump? Twenty feet, which happens to be a whole nine feet and four inches shorter than the world record for the log jump for humans.

If you’re not familiar with this unique talent, it’s exactly what it sounds like: jumping and doing other acrobatic moves on the back of a horse. Pretty wild, isn’t it? Equestrian vaulting was only ever an official Olympic event in 1920, held in Antwerp, Belgium. It was one of the other equestrian events at the Summer Olympics that year, including show jumping, eventing and dressage. Moreover, in that year only three countries, France, Germany and Sweden took part in the sport, which was the last time the event was held at an Olympics. To be honest, it doesn’t sound like it was such a competitive field.

In 1900, motorboat racing, also known as powerboating, made its appearance at the Olympic Games in Paris as a demonstration sport. Then, in 1908, at the London Olympics, it was a full-fledged event and not just as one event, but as three different events in which only men took part. What happened? Apparently the wind in England was so brutal to the sport that many boats filled up with water, had engine problems and other issues that forced the participants to stop. In the end, Britain’s host nation walked away with two of the three gold medals, with France claiming the third, according to the International Olympic Committee (IOC).

Target shooting is a fairly common thing in the Olympics (re: bull’s eye, skeet and trap shooting in the summer and biathlon in the winter). However, for competitors who aren’t aiming for rosy targets, but rather things in the air, they usually shoot at disc-shaped targets called clay pigeons. However, during the 1900 Olympics in Paris, they used real pigeons. After more than 300 birds were killed during the event, the officials decided to stop using live targets, hence the clay pigeons. It’s also a good thing because that event would certainly be controversial if it were still happening today.

Yes, really, like Hamiltonstyle pistol dueling. But relax, it’s not as deadly as it first sounds (after all, we’ve left Colosseum-era live duels and kills in the past). Instead of real bullets, Olympians used wax bullets during the 1906 Olympics in Athens and the 1908 Olympics in London. Wow! For the Athens Summer Games, the participants simply shot at dummies, not at each other. In 1908, however, people gathered and watched as two male athletes fired wax balls at each other with dueling pistols, while wearing protective gear for their torsos, faces, and hands.

For the background, singlestick is a martial art that uses a wooden stick as a weapon. It has its history as a way of training soldiers in the use of real swords. In 1904, participants in the singlestick event tried to hit each other with wooden clubs. In a way, this sport resembles fencing, and it was actually considered part of the fencing program at the 1904 Summer Olympics in St. Louis, Missouri. For the record, there were only three entrants from two countries in the first (and only) Olympic singlestick event and Cuba took home the gold.

The rope climbing event already existed during the Olympics during the 1896 Summer Olympics in Athens, the first international Olympics to be held in modern history. The event was exactly as it sounds (climbing a rope), and the athletes were judged on form and speed. After those matches, however, the event just became a race to the top. The last rope climb was at the 1932 Olympics in Los Angeles. In a way, it’s not too far from the rock climbing events (officially called sport climbing) that were introduced at the 2020 Summer Olympics in Tokyo, with one of the events being speed climbing (AKA to the top as fast as possible).

To be honest, this is probably the least weird of the Olympic sports that are no longer on this list, it’s just a little confusing when you think about it. The term “solo synchronized swimming” sounds like a huge contradiction at first, who do they synchronize with when the athletes are alone? The “synchronized” part was simply referring to a swimmer’s movements being in sync with the music, not, you know, yourself so, in a way it’s not much different from figure skaters who also choreograph their programs to music. Solo synchronized swimming first appeared at the 1984 Olympics in Los Angeles and then reappeared in the 1988 Olympics in Seoul and the 1992 Olympics in Barcelona.

Most people consider tug-of-war more appropriate for something like a high school field day or an old-fashioned company picnic or Squid Game. However, this sport was once a fully-fledged, legitimate Olympic event. If you think about it, the tug of war actually requires a lot of strength when you do it at that competitive level. Tug of war debuted at the 1900 Paris Olympics and went on to last for five Olympics. At the 1904 Olympics in St. Louis, Missouri, the US even walked away with the gold. Tug of war officially ended as an Olympic sport after the 1920 Games in Antwerp.

In 1904, there was an Olympic event where participants simply jumped into the water to see how deep they could dive while keeping their arms and legs still. The official depth was read 60 seconds after the participants’ heads hit the water. Since there doesn’t seem to be a lot of real skill involved in such an event, it’s not like the athletes were doing deep sea diving or trying to stay underwater for as long as possible, it’s no wonder diving to depth was only for the one year. If anything, all you needed to gain was a lot of muscle and weight pushing you down, as opposed to any palpable athletic ability.

While not an official medal event, ski ballet did appear at two Winter Olympics, once in 1988 in Calgary, Canada, and then again in 1992 in Albertville, France, which is surprisingly recent to be on this list. Ski ballet is exactly what it sounds like: choreographed movements on skis. Sure, it might be bizarre, but it’s actually quite entertaining to watch and full of athletic and artistic prowess. However, the sport was so unpopular that even the International Ski Federation stopped all formal competitions for ski ballet after 2000, which is a big minus for anyone practicing the sport.

With so many events scheduled for both the Summer and Winter Olympics, it’s only natural that some of the least popular would end up getting the boat. Still, it’s pretty cool that there was a certain amount of experimentation, especially in the early 20th century. Maybe everyone should count their blessings that they don’t have to see people shooting real pigeons on live TV or horses completing a long jump.

This article was originally published on February 16, 2018

Man Arrested For ‘Derogatory Remarks’ Against PM Modi In Rajouri