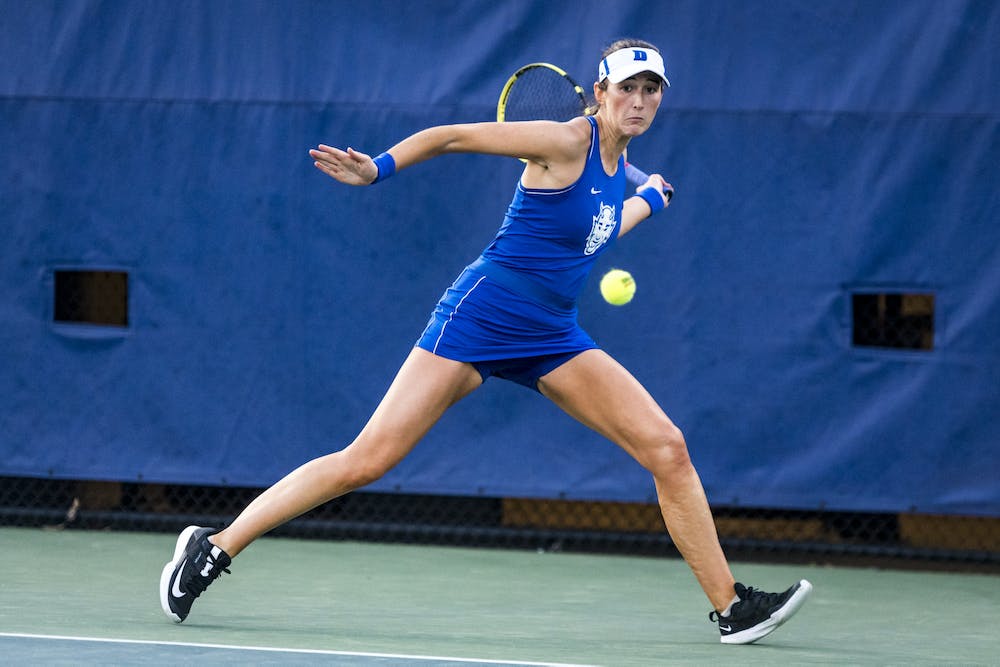 Duke continued his dominant NCAA tournament on Friday with a 4-1 defeat of No. 14 seed Georgia at Ambler Tennis Stadium in Durham. The win moves the fourth-seeded Blue Devils to the quarterfinals in Champaign, Illinois, placing the team just three wins away from the program’s second NCAA championship. What’s more, Georgia’s 4-1 defeat is the fourth straight game in which Duke has not allowed more than a single point on the scoreboard. Since the ACC tournament semifinal against Miami, Duke has outperformed his opponents 16-3, a really skewed stat that shows how well the team is performing late in the season.

Friday’s game started off with a hard-fought double as Duke and Georgia each won a game 6-3, leaving the fate of the Blue Devils in the hands of senior Margaryta Bilokin and graduate student Eliza Omirou. With the set tied at 4-4, the duo won back-to-back games to secure the 6-4 win and give Duke a 1-0 advantage going into the singles.

“I’m absolutely happy with how we’ve closed the doubles,” said head coach Jamie Ashworth. “I thought we started out a little hesitant, with not as much emotion as we were playing with, there was probably a little bit of nerves in it, but the way we finished the doubles was what we needed to do to get some momentum going in singles. to go.”

Even with a 1-0 lead, hitting a ticket to the quarter-finals would be no easy feat for the Blue Devils. Duke tends to have an aggressive style of play in singlesits. Players love to attack early, hit the ball with pace, clear shots and keep points short. The Bulldogs, on the other hand, are much more defensive and often seem to win games by exhausting the opponent with consistent shot and long rallies. When these two styles clash, the more aggressive player often becomes frustrated and takes risky shots too early in the rally. As a result, Duke’s lineup had to deal with single-handed opponents who took the team out of its element and didn’t agree with the typical Blue Devils style of play.

“They let you hit so many balls, it’s really a physical tennis style, and we don’t play a lot of those kinds of teams. They’ve really taken us away from what we love to do,” said Ashworth. “They make you play long points and you start going a little bit more and a little bit more and you end up missing an inch because you’re trying to go a little bit more so they don’t run the ball down.”

However, as a testament to the teams’ fantastic season, the Blue Devils overcame the Bulldogs’ defensive style, dropping just one game in singles. With outright wins from Emma Jackson and Chloe Beck and a come-from-behind three-set triumph from Georgia Drummy, Duke was on his way to the quarterfinals. Simply put, the Dukes’ offense was too much for Georgias defenses to handle.

“I thought when we got the chance to score points, we did it well. I thought we stayed true to what we do well,” said Ashworth. “I thought we had to move forward a bit more. I thought Georgia Drummy should come in more than she usually does. But we were able to do that, they trusted the work they put in and we were able to get three singles to get matches there.”

The Sweet 16 win is yet another example of the team’s ability to perform under pressure when it matters most. Despite trailing 4-1, the game was tense from the start and there were many moments when just a few bad points could have turned the momentum in the Bulldogs’ favour. Duke was just two games away from losing the double before Bilokin and Omirou came through. Without that early point, a win would have been a much more difficult task, especially considering how close the ankles were, half the lanes going to a third set.

In singles, Bilokin lost in straight sets to Ania Hertel of Georgia, with both Ellie Coleman and Kelly Chen in tight third sets. Chen was just a game away from defeat when Drummy took the win for the Blue Devils. Had the Ireland senior not fought back after losing the first set, Duke could have easily seen his season come to an end on his home turf.

Friday’s game talks about Dukes’ ability to excel at crucial moments and deal effectively with the pressures of college tennis’s biggest stage. So what explains the teams’ ability to withstand this pressure when it matters most?

“I think we’ve tried to avert that and see it as another chance to play together as a group. We haven’t really talked about what if we win or lose the game,” Ashworth said. “The pressure is definitely building, you can’t hide from it, you can’t run from it. But I told them after the game that we have to really appreciate and understand what we’ve accomplished to get to the quarters of this thing , so far. There are 260 something D1 women’s teams, and there are eight more who have a chance and we are one of eight.”

There is certainly a lot to like for Duke this year. With an overall record of 22-3, a conference title and an NCAA quarterfinal, the program is enjoying one of its most successful seasons in recent memory. The Blue Devils are sweltering hot and haven’t lost a game since the end of March.

Only three opponents stand between the Blue Devils and the top of college tennis. They return to play Friday against the winner of Saturday’s game between No. 6-seed NC State and No. 11-seed California.

Get The Chronicle straight to your inbox

Sign up for our weekly newsletter. Cancel at any time.

Can you create a moral metaverse? | Metaverse