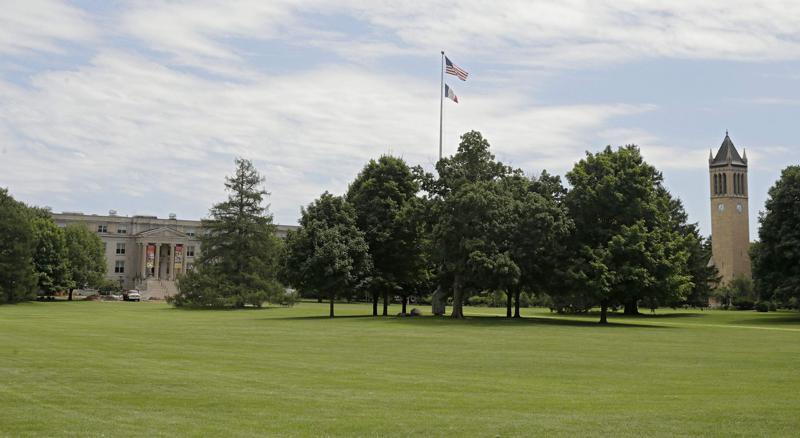 Curtiss Hall (left) and the Campanile (right) are displayed on the campus of Iowa State University in Ames. After an investigation, the university has suspended its men’s hockey club for next school year. (The Official Gazette)

An Iowa State University investigation into the men’s hockey club found that underage drinking, alcohol abuse, personal humiliation and financial penalties were linked to admission, perpetual membership and status, forcing the university to suspend the club for the following academic year for competition.

The hazing revealed by the ISU Bureau of Student Behavior in its investigation of the Mens Cyclone Hockey Club targeted new or aspiring members dating back to at least 2018, according to a press release.

The team’s head coach and general manager, Jason Fairman, who has been with the program for six years and head coach for four years, with a salary of $62,373 in 2021, is no longer listed as an Iowa employee. An ISU spokesperson said his official divorce date is June 30.

As a result of the violations and improprieties of the Student Code of Conduct, the state of Iowa suspended the men’s hockey club from all competition for the 2022-23 academic year, overturning the interim suspension imposed in May when the allegations first came to light. extensive.

In addition to the years-long suspension, the men’s team must develop and submit a plan that includes new and ongoing team education and policies aimed at eliminating hazing and addressing alcohol and drug abuse.

The Cyclone’s players, parents and alumni issued a statement on social media Thursday afternoon declaring the ISU report and sanctions inaccurate and harmful and using the term hazing to advance an agenda.

Cyclone Mens Hockey steadfastly denies any actions that violate the university’s Code of Conduct for Students, according to the statement. At no time was there any requirement, implied or otherwise, of alcohol consumption in connection with the program.

Players were never “obliged to commit acts of personal humiliation, and at no time were rookies or new members of the program deliberately attacked.

The program was and is built on hard work, a team-first mindset, leadership and respect, the statement said. It is unfortunate that the Iowa State University administration does not share the same characteristics.

The letter promises to explore all available avenues in responding to the university’s sanctions.

ISU said the men’s hockey program should be restructured as a traditional student-run sports club funded and operated like the Womens Hockey Club, with a roster of 17 and a student president, treasurer and secretary, along with a coach.

Under the new structure, the men’s club must elect student leaders, draft a constitution and submit to biennial program reviews.

According to the study summary, necessary adjustments to the size and activity level of the club will likely need to be made.

If the restructuring and training is complete on December 16, 2022, the team can resume training and intersquad scrimmages in the spring of 2023. However, the team is not allowed to travel or participate in competition matches in the spring.

Full activities could be resumed in the summer of 2023 if the club adheres to the mandates and commits no more violations. If you do not do this, the suspension will be extended.

A summary of the investigation shows that ISU received two complaints about the men’s hockey club on April 4 and 7, although the details were not made public.

Three events, in particular, offered rookies admission, continued membership or increased status in the club, according to the study summary.

The events created conditions that jeopardized the mental or physical health or safety of the targeted students, included acts based solely on the classification status of the targeted student members, acts of possible personal humiliation, and acts contrary to were with applicable law and other university policies, the summary said.

Although ISU’s Recreation Services oversaw the club, division personnel and coaches did not understand their role or exercise proper oversight, including handling complaints about hazing, financial matters, and communications.

A year ago, before allegations of hazing and financial mismanagement came to light, the Mens Cyclone Hockey Club had a three-division roster of 24 players from 72 athletes each led by head coach and general manager Fairman.

The team also listed an assistant coach last summer, Brian Gibbons, who officially retired from the state of Iowa on June 24, 2021.

According to the hockey clubs website, Fairman led the team to one of its most successful seasons in 15 years last year by securing the regular season championship of the Central States Collegiate Hockey Leagues.

Fairmans’ coaching background includes an assistant position at Marquette University, time in the U.S. Hockey League, stints in NCAA Division I and Division III hockey, and a head coach with a high school team in Buffalo, Minnesota.

After four years in Iowa State, Fairman has established himself as one of the top tactitioners in the American Collegiate Hockey Association, but this isn’t surprising, given the extensive and diverse coaching resume he brought to Cyclone Hockey, according to his ISU statement. organic .

Fairman oversees all hockey and corporate activities of the organization.

In their reply letter, members of the program said that with its investigation and subsequent report and sanctions, the state of Iowa has undoubtedly violated Cyclone Mens Hockey’s reputation, but more importantly, its student athletes, coaches and alumni.