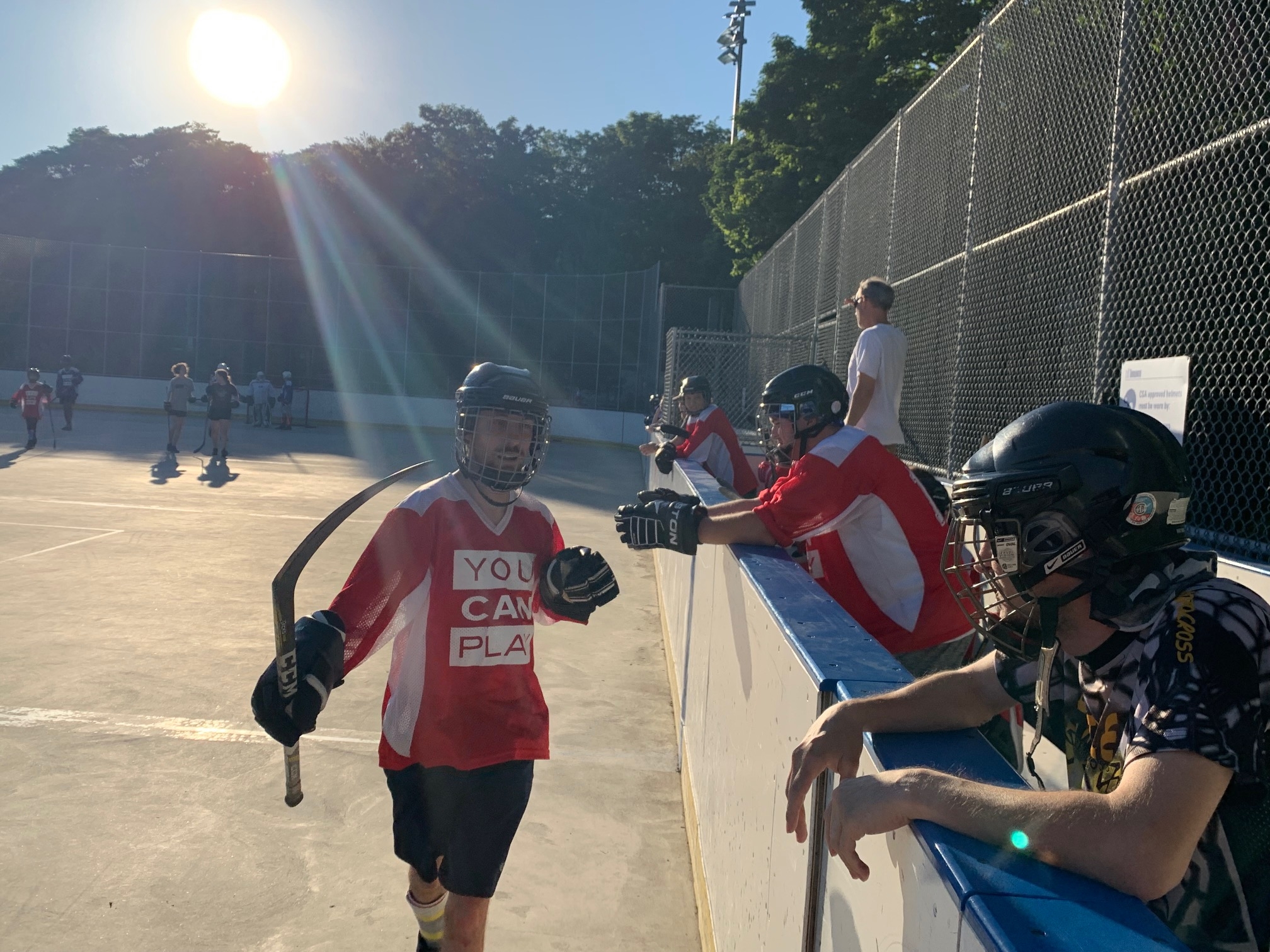 Don’t tell the Blues and Reds that their championship is different from the Lightning and Avalanche competing for the Stanley Cup.

These men, women, boys and girls are equally proud of their game, although they won’t try to get each other through the board. The best athletes are more likely to retire when certain less skilled opponents have a breakout.

Welcome to the All Abilities Division of the Withrow Park Ball Hockey League, which offers 25 players, ages 12 to 55, the opportunity to shoot and score, which many players with special needs are denied. Their sweater logo proudly proclaims You Can Play.

We have a wide range of participants, says co-founder Marcus Pratt, whose son Zachary inspired the program three years ago. Zachary is 25 and has a developmental delay, (co-organizer) Jonathan Woods son Dylan is 17 and partially sighted. Zachary has fragile X syndrome, the most common form.

Fragile X is a genetic disorder that causes a range of problems, including learning disabilities and cognitive impairment. The other players have a series of restrictions.

Leslie Woodyatt played in the Special Olympics nationally in everything from swimming to softball, as well as floor and ice hockey, going back to the 1980s, but she found a later career as a goalkeeper in All Abilities.

I love staying active, playing here and meeting new friends, said Woodyatt, who has been honored by the Etobicoke Sports Hall Of Fame for her various athletic achievements. We lost a few years of ball hockey to COVID-19 but were back.

A cousin of Jeff Woodyatt, former Toronto Marlies junior and 1973 Memorial Cup champion, Leslie said ball hockey keeps her in shape and provides helpful tips for her own coaching role in many Special Olympics sports. She models her style on Sami-Jo Small, who was the stopper of the Canadian women’s ice hockey team for many years.

This ball hockey program grew out of a special ice hockey team Pratt and Wood worked with, the Don Mills Donaldsons Diamonds, who had children with Fragile X and conditions such as autism, Down syndrome, and PTSD. The two men and music teacher/artist Gregg Lawless brought the group to Withrow, Toronto’s premier ball hockey league, with divisions from four-year-olds to adult males and females.

That meant the All Abilities could use WPBHL umpires and timekeepers on outdoor courts at Withrow and Riverdale Parks in the East End of the city. Their games are 5-on-5 with timed serves.

They’re as big hockey fans as anyone else, they all watch TV and many follow the Leafs, Pratt said. But this opportunity was not part of their childhood. There just wasn’t an outlet like this, especially after high school. Some only come to the games, some parents drive them (and can stay on the couch). It’s a nice band there and a great atmosphere during the game.

People are amazed at how good some young players are, how competitive they can be.

A few high schoolers, who earn volunteer hours for their degrees, stay on the edge during play, making sure the rule of two or three passes is applied to all goals to involve the less adept in rushing or giving slower participants loose balls . During Thursday night’s game, a vocal boy with an unprepossessing attitude on the bench and on the floor urged teammates to open up or cover their positions in defense, but he was the first to urge the referee to target his team. waving away because the pass rule was not followed.

The evening begins with center circle stretches and team announcements. The news that a player has just been admitted to college is greeted with enthusiastic taps on the stick.

Our apologies, but this video cannot be loaded.

To me, that’s the best part about it, Lawless said. The best are between the ages of 25 and 35 and try their best, but if the ball goes to the side, a volunteer can push it to one of the less able kids and it slows down. Anyone could sing go Dougie! and that person gets 30 seconds to move it, pass it on to someone, or even score it themselves.

The best do not take the ball from the weaker. We don’t coach them on that, it’s part of the culture they see when they join.

A shootout is often designed to close games, which adds even more excitement to the participants. At the end of the spring schedule are prizes for the best goal celebration, best hockey hair, play-by-play calls, and other awards. Last Saturday, All Abilities were again part of the WPBHL Championship Day with special Hockey Night Canada-style introductions.

Lawless was previously a counselor at Camp Trillium for cancer patients and has taught songwriting workshops in high schools and colleges that English and French school boards use to instill values ​​of integrity, respect, fitness and honesty.

All that experience was something that really appealed to me when I saw the email inviting parents to coach here, he said. These kids don’t see it as anything other than that I love playing hockey, being with friends, scoring a goal, being part of a team and enjoying the success of others.

Wood said he hopes the program can be expanded and expanded to other ball hockey leagues next season.

When we first made the announcement about the league, we honestly didn’t know who we were going to get, but people found out and players came from all over town, not just Withrow.

Marcus and I thought we couldn’t be the only parents who have kids who want to play. We started coaching on the floor, but soon saw that the kids were okay and gradually withdrew to the couch and let them have fun.

From our newsroom to your inbox at noon, the latest headlines, stories, opinions and photos from the Toronto Sun.

Thanks for signing up!

A welcome email is on its way. If you don’t see it, check your junk mail folder.

The next issue of Your Midday Sun will be in your inbox soon.

There was a problem signing you in. try again

Cannes Lions 2022: How Google Aims to Improve Search Ante, From Multi-Search to Reflection of Diversity