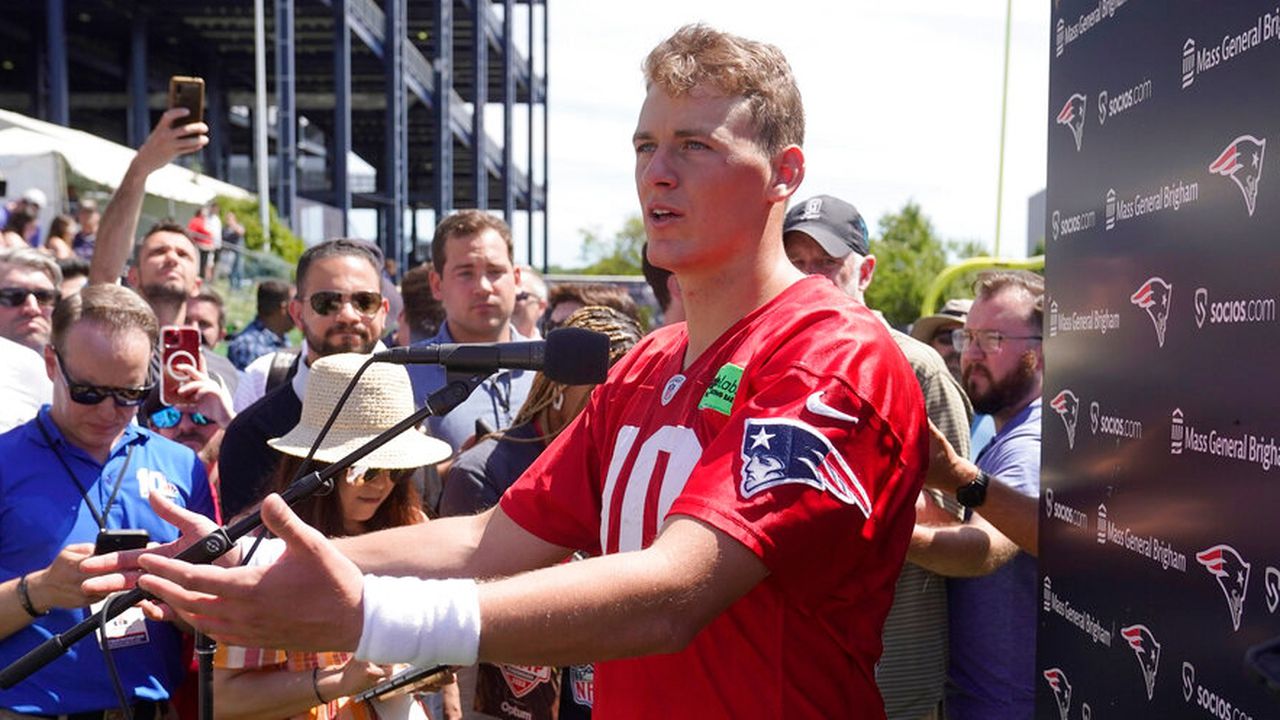 New England held its first training camp on Wednesday, but it wasn’t quite a return to football for Patriots quarterback Mac Jones.

I think it’s good to always take some time off, Jones told reporters on Wednesdays, but at the end of the day they were always working, always trying to get better, whether you were on vacation or not, or whatever you want to call it. You try to fix the things that you could have done better the year before. I’ve always tried. As a little kid in Pop Warner, what did I do badly last year that I could do better? Okay let’s work on it off season, it’s that simple.

COMFORTABILITY IS THE WORD FOR EAGLES QB JALEN HURTS

You have a life, of course, but ultimately my life is football, and many guys on our team, our life is football. Constantly thinking about football, about the next year and what we have in store. It’s hard sometimes to look ahead and look too much ahead, but you just want to be where your feet are and focus on those days to get stronger, get faster, all that stuff.

In his kickoff press conference before training camp on Tuesday, Patriots coach Bill Belichick said Jones has made dramatic improvements and tremendous progress since his rookie season, starting from a much, much higher point than at his first training camp, when the former Alabama All- American competed with incumbent Cam Newton for the starting spot.

I guess I just evaluate what I wanted to get better at be it footwork, where the ball is on certain throws, just trying to learn how to hit each throw in different ways and then of course you have to during the season to apply , jones said: about his improvement. The off season is great, but you want to take what you learn and apply it, and being able to use it in games is why you do it. It’s why you work hard.

You learn so much in your rookie year. You absorb it in the off season, study and think about what you want to do to get better. I feel like I did, but it will happen in the gaming experience. You see it, you try to see what you saw and confirm it and then react. That’s the whole point, whether you’re a rookie, a sophomore, or a 10-year-old, it doesn’t really matter.

Jones made the Pro Football Writers of Americas All-Rookie team, finished runner-up to Cincinnati Bengals wide receiver JaMarr Chase for the AP Offensive Rookie of the Year Award, and played in the Pro Bowl in the 2021 season, when he turned 352- of-521 completed passes for 3,801 yards with 22 touchdowns and 13 interceptions.

Jones composed those numbers with offensive coordinator Josh McDaniels calling the plays. But McDaniels became the head coach of the Las Vegas Raiders in January and the Patriots have not yet named a replacement.

Jones admitted that Belichick, Matt Patricia and Joe Judge were the coaches leading the New England attack during training camp.

I think Coach Belichicks clearly did a good job explaining exactly what we want to do if a foul, jones said:, and Matty P has seen so many different defenses along with Coach Belichick, so it’s like combining their knowledge of how to attack the defense. That’s something that really struck me. They’re great guys — and Coach Judge — they all bring this different energy into the room when they’re presenting, so they’re trying to get us all to work together. And most importantly, it was all on the same page regardless of who’s talking, who’s making the decision about a play or what not, and it’s always an open conversation, which I love.

At the end of the day, the players play and the coaches coach. You want to listen to the good coaching you can get from three coaches who have all been head coaches, so they’ve seen a lot of football, and that’s what I’m trying to understand is: what’s something that each of them said in a meeting that I can take it, whether it’s about life or football, and then apply it to the game? Like I said, they all bring a different perspective, but I feel like they’re listening to the players: Hey, we kind of like this concept. Okay, let’s try. Or if they want to put something else in it, they explain why. That’s the most important thing for me to understand why I was doing something, and from there, as a player, my job is to perform the plays.

Belichick said the Patriots had used this off-season as a good time to streamline things on offense. That could result in a faster attack for New England this season, Jones said.

I mean, we’ve got a long way to go, but I think we’re doing a lot of good things schematically to get there and get the ball a lot faster, jones said:. We have really good skill players lining up to make those plays and, of course, a great offensive line. It all comes down to dividing the ball, whether that’s passing it on the running back, throwing a swing to the right, throwing a deep ball — it doesn’t really matter what I do, if we can do it quickly, explains the stress on the defense. It makes everything more difficult.

Mark Inabinett is a sports reporter for Alabama Media Group. Follow him on Twitter@AMarkG1.