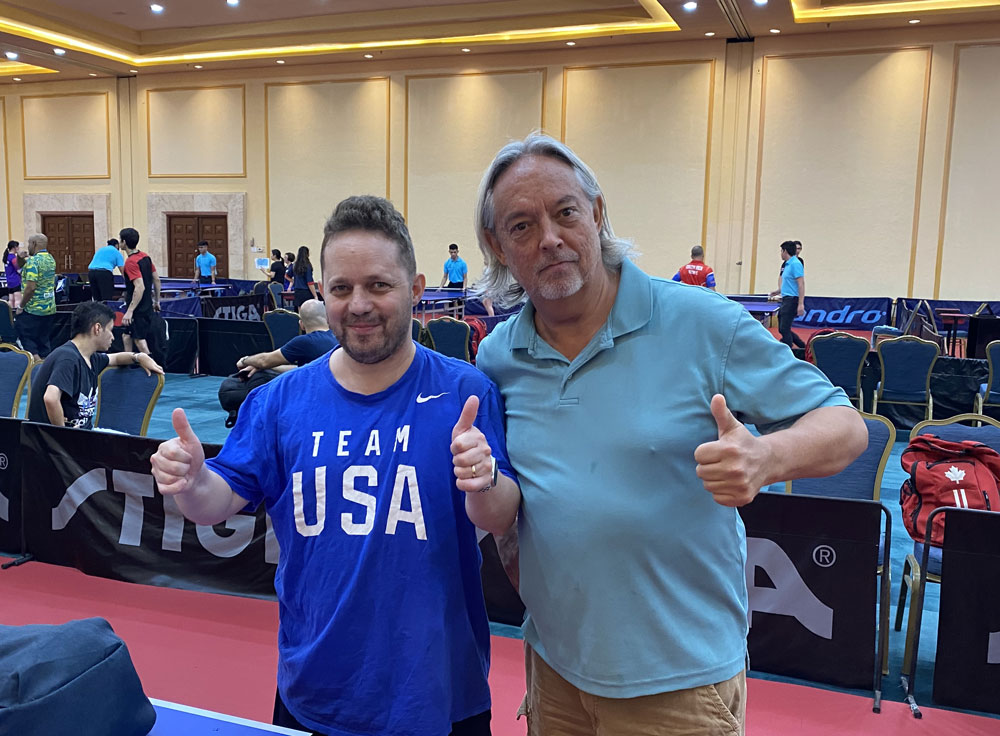 How did you start playing table tennis? Were you never a top youth player?

I am from Port Huron, Michigan. Port Huron had a weekly club and my parents made sure the whole family played every Monday. I was eight. The club was founded by Marshall and Jay Barrymore. Jay was a top junior along with Mike Baber. Fortunately, there were many clubs in the area growing up – Sarnia, Ontario. Detroit GAR (with George Burns). Detroit Club (George Buben). And many tournaments in Grand Rapids with Dell Sweeris. I was the best Junior player in Michigan for many years. Was invited to the Pan Am Games. And was the undefeated Detroiter TEAMS Junior MVP, TEAM captain and player of the 1979 winning Michigan Team.

How did you get started in hardbat and other classic surfaces and what are your best results?

When I started playing as an eight-year-old, it was with a classic hardbat ping-pong paddle. I still have my grandfathers paddle from 1940, as well as a Hock paddle. I switched to sponge about 1972. I returned to hardbat at the 2014 US Open. I won U-2000 in my first attempt. I would say losing to Larry Hodges in the semifinals of the 2021 US Open Hardbat is my best result. On the way I beat Estee Ackerman.

Hardbat is all about point strategy and not about service and course of the third ball. Everyone can play. Anyone can win. Players love the long rallies and don’t know who is the better player until you start the game. It’s easy to play, easy to understand and everyone has fun.

How did the idea of ​​creating a Classic Hardbat World Championships come about?

A few years ago, there were very few hardbat events and zero hardbat-only tournaments. With encouragement from Jones Baldonado and AJ Carney, I decided to try and organize a tournament. It quickly became international. I researched whether there is an existing World Hardbat Championship. There wasn’t. I spoke to Barry Hearn about the sandpaper and their world sandpaper championship. I was encouraged to promote something bigger. I did it, with a lot of help

What are your expectations and plans for the future of the Classic Hardbat World Championships?

Next year we will be a destination event. We will include classic hardbat, classic sandpaper, classic wood, and a Loco event where you can play with one of those paddles you want.

Which people and sponsors helped set up this event?

A LOT. My wife Ijeoma and my good friend Stan Pennington. AJ Carney with TBTT is a Hardbat Hero. Jack McCarty with TT Live Scoreboard. Alhasan Mohamed of Table Tennis Life, Inc was incredible. Ali Ammar, Larry Hodges, Ty Hoff, Bowie Martin, Dave Sakai, Danny Looksiller, Jones Baldonado, Vlad Farcas. I started a company We R Table Tennis, Inc., and along with Stan Pennington, Igor Negovetic, Chris Schabel, and Eric Bronk, they all worked incredibly hard to create a new AI tournament software called AMIBO. This weekend we’re giving away a table to a needy school in Houston. In total I have 42 sponsors for this event: The City of Missouri City, The Mayor, Unichem Pharmaceuticals, Scott Delaney (author of The Tigers Eye Angels in Mumbai), Domoishi Asian Cuisine, Cardboard Cutout Standees, Center Court Pizza, Gala Bethany Photography, Wolf Diamonds, I9 Sports, Butterfly and many more! Butterfly also greatly helped promote the event on their news page, providing balls, barriers and leaderboards. Finally, Willy Leparulo and the NCTTA have supported ALL of my efforts. Just because is the only reason really. The event would not take place without Willy and the NCTTA.

You once wrote to me, “I will lobby and work with USOC to get classic hardbat, sandpaper and wood ping pong recognized as an Olympic sport.” Can you explain that in more detail?

The goal is to promote ping pong. Let the sport grow for everyone and not just for the elite athlete. The Olympics regularly add new sports. A great way to (re)announce ping pong is to have it recognized as a sport worldwide. It’s stupid that it isn’t. It’s time for Classic Ping Pong, the largest individual sport in the world, to play with our table tennis brothers. One way to do this is through the USOPC. Countries around the world support their sports and athletes based on USOPC recognition. Ping pong is MUCH more popular than table tennis. Yes at the highest level – a sponge player will beat a hardbat player. But put a hardbat in Ma Long’s hand and we’ll see what happens when the playing field is leveled. Jan-Ove Walder is number 14 in hardbat in Europe. Another way to look at classic hardbat ping pong is for a sprinter to beat a marathon runner in a sprint. A downhill skier will also beat a slalom skier to the finish in his event. It’s not always about biggest, fastest, strongest. Ask the Olympic curling champion. It’s about skill. I think it makes sense to add classic hardbat as a category or as a separate sport to the Olympics. By doing so, classic hardbat ping pong will be recognized as the great sport that it is, and has been for over 100 years. I will lobby and work with USOPC (and USATT, ITTF, WTT and Santa Claus as needed) to make this happen on behalf of 300,000,000 players worldwide.

What do you do outside table tennis? Or is there nothing in the world except ping pong?

Laughs I’m a stay at home dad. I playfully describe myself as a soccer mom. I have a beautiful wife Ijeoma, an eight-year-old daughter Faith and a five-year-old son Luke. There is nothing in the world but family.

Is it ping pong or ping pong?

Laughs, I’ve been asking Escalade Sports that question since 2014. I think they want to keep it a secret. For now it’s Classic Hardbat, Classic Sandpaper. And Classic Wood.

After the Google Calendar chopping block, it looks like ‘Goal’ is next