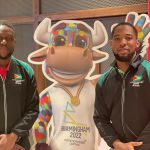 – Players ask for support and funding

The pair of Natalie Cummings and Chelsea Edghill remain Guyana’s last hopes for a podium finish in table tennis at the Commonwealth Games, following their Women’s Doubles victory at the Round of 32 over South Africa. 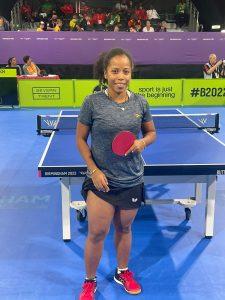 Natalie Cummings after her historic performance at the Commonwealth Games.

They advance to today’s Round of 16 to face New Zealanders Chunyi Feng and Yangzi Liu.

When the two Guyanese head to the National Exhibition Center’s Table Tennis Hall today, it will be the first time Guyana’s females have appeared in the Doubles Round-of-16 at the Commonwealth Games.

Things didn’t go so well for Christopher Franklin and Shemar Britton in the men’s doubles round of 16.

Meanwhile, Cummings’ exceptional run in the Womens Singles in Birmingham came to an end yesterday when she was defeated by 16-year-old Welsh prodigy Anna Hursey 0-4 in the Round-of-16. 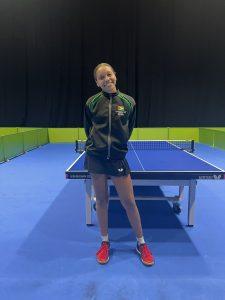 Cummings, after her breathtaking seven-set thriller in the Round-of-32 against Mauritius Ruqayyah, became the first Guyanese, male or female, to advance to the Singles Round-of-16 at the Commonwealth Games since Table Tennis was added in 2002 .

Looking back on her historic win on Thursday night, Cummings said she owes it all to her teammates who pulled her through.

Making her third appearance at the Commonwealth Games, Cummings believes the event will be their best performance in 2022.

As a team we fit well together, we support each other. We fight together, win together. The little camps we had (at home), we kept pushing each other; so I’m happy for everyone who came here (to the Commonwealth Games), Cummings said. 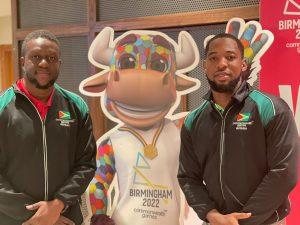 Christopher Franklin and Shemar Britton will be the first Guyanese pair to play in the Men’s Singles Round-of-16 at the Commonwealth Games.

Coach Idi Lewis lamented the lack of funding for the sport and believed that if they had been given enough resources to properly prepare, it would have been better; something Cummings wholeheartedly agreed with.

Financing! We keep saying it. Financing is so important. Equipment on time, better facilities. We need a house for table tennis. For me setting a benchmark, top 16 I don’t think is the best thing we can do, but it sets a precedent that we can do better, said the candid left-hander.

Cummings added that if we trained at home and we got this far, a lot less more support towards us, I think we could do a lot better.

Like Idi said, they weren’t supposed to be here, but they were here to show everyone, show Guyana that, just give us a chance and go do things, Cummings said.

A North Texas restaurant bans cell phones at the table