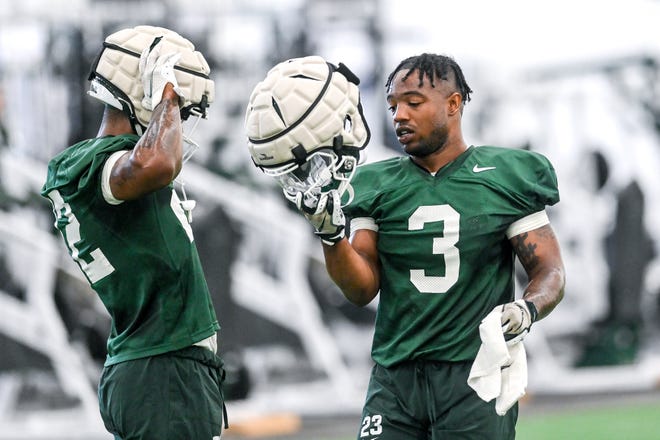 EAST LANSING Jarek Broussard shuffled under the tent, shuffled his feet around his carriage and the cushions on the grass, and burst through the tunnel.

In Michigan State soccer practice on Thursday’s first day of practice, he looked like one of the guys. In the coming weeks, coach Mel Tucker hopes to get a better sense of whether the former Colorado running back could be the one to replace Kenneth Walker III and follow in Kenneth Walker III’s footsteps as an instant impact transfer to help the Spartans’ swift attack. to lead.

The biggest challenge is knowing what to do within this schedule, Tucker said of Broussard, who only arrived at MSU in May. We ask him to know the plays and the terminology and things like that. And he’s familiar with that, but it’s a little bit.

‘WE DID NOTHING LAST YEAR’:Mel Tucker strikes up against complacency

Walker proved to be a crucial portal addition for Tucker in helping MSU go 11-2 and finish number 8 in the country.

After spending his first two years at Wake Forest, Walker emerged last season as one of the best and easily most impactful transfers in the country, winning both the Walter Camp National Player of the Year award and the Doak Walker Award won as the best running back in the country. The consensus first-team All-American finished first among Power Five players with 1,636 rushing yards (the fourth-best season in school history) on 263 carries and an average of 136.3 yards per game. Walker produced 1,168 of his yards after contact. He also finished eighth nationally with 18 hasty touchdowns, fifth in a season by a Spartan.

It also turned Walker into a new unique transfer-era phenomenon, going to Seattle in the second round of the NFL draw with the 41st overall pick. And his entry into conscription in December left a huge void for the Spartans.

Without Walker in the Peach Bowl win over Pitt, MSU managed to rush just 46 yards on 24 carries from Jordon Simmons, Elijah Collins and Harold Joiner. In late November, the Spartans added Wisconsin transfer Jalen Berger, who signed up in January and went through spring training.

WHAT WE SAW:Michigan State Observations from Day One of Preseason Training

In late January, Broussard, 2020’s Pac-12 Offensive Player of the Year, announced his intentions to reunite with Tucker. He arrived at MSU this summer with two seasons to go.

The Dallas native of 5 feet-9, 185 pounds sustained ACL injuries in his first two seasons in Colorado, redshirting as a true freshman in 2018 and then sitting alone in the Tuckers season at Boulder in 2019 after a second knee surgery.

It’s been a few years since we had him, but you can tell he’s just more mature, Tucker said. These guys just grow up. And that’s what you see these guys. And then, of course, from a physical point of view, he’s just bigger.

During the pandemic-shortened 2020 season, Broussard ran 895 yards in six games, an average of 162.6 per game that finished in third place in the Football Bowl Subdivision. He added five touchdown runs to earn first-team All-Pac-12 honors and an All-American honorable mention.

He is generally just a football player. He likes to play football.

Starting 10 of his 11 games last season, Broussard ran for 661 rushing yards on 142 carries with two touchdowns to get All-Pac-12 honorable mention, but missed the season finale against eventual league champion Utah due to a non-COVID disease .

He has the tools. I think he has good vision in the backfield and he has good hands. So I think we’re going to do a lot with him, MSU quarterback Payton Thorne said of Broussard. And it will be interesting to see what kind of player he can be here because of course we know what Ken was and all that. You saw Ken at summer practice last year, and you knew this man was going to be a breeding stallion.

Broussard arrives and enters a busy contest with the Spartans.

Simmons served as Walkers primary backup last season, and has 497 yards on 126 carries without a touchdown in two seasons. Collins ran nearly 1,000 yards as a freshman in the red shirt in 2019, but has battled illness and injury for the past two seasons.

Joiner arrived as a transfer from Auburn last season, finishing with 43 yards on 13 carries. Berger had 389 yards on 84 attempts with three TDs in seven games over the past two seasons in Wisconsin.

And by adding Broussard as the fourth running back transfer in the past two seasons, Tucker showed his intention to remain aggressive in upgrading positions if necessary.

The players know we’re going to add guys to the team every year, whether they’re from high school or high school, Tucker said. And so it has always been.

Offensive lineman Matt Carrick is back in uniform and going through drills after leg surgery cut his 2021 season short and forced him to miss spring training.

Tucker said he plans to take the senior slowly as he returns to the field and fights for the runway with the right guard.

We’ll try to give him some reps, Tucker said, and then we’ll give him a little more and then build him up.

The offensive line was decimated by injuries in the spring, forcing MSU to change its spring work on offense and move two defensive linemen for healthy bodies. During Thursday’s 15-minute open-portion practice, there were no red jerseys or offensive linemen sitting on the sidelines.

We had so many injuries in the spring that it was hard to even see who we had, Thorne said of the big boys before him.

Only a few players wore red jerseys during practice, indicating injuries: cornerback Ronald Williams, wide receiver Terry Lockett Jr. and defensive end Avery Dunn. Chester Kimbrough wasn’t in a red jersey but didn’t work with the cornerbacks, instead going through individual work on the side of the field.

Tucker said one of the biggest position fights he follows is the kicker, where he said freshman Jack Stone and sophomore walk-on Stephen Rusnak compete to replace six-year-old stalwart Matt Coghlin.

At the end of practice, we made PAT field goals, Tucker said, so I kept a close eye on our pedaling situation with Rusty and Jack Stone.

Ancient species of pandas were discovered in southeastern Europe