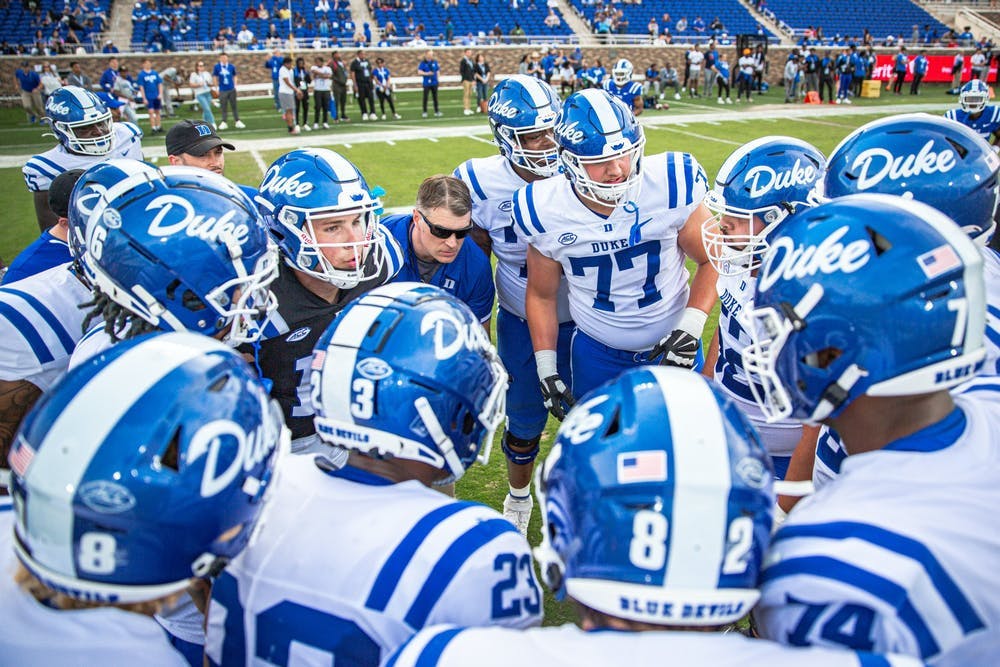 Head Coach Mike Elko and the Blue Devils take the field for the first time this year at the Brooks Practice Facility on Tuesday night, with a fall camp lasting all of August. Wearing unnamed blue and white practice jerseys, this year’s Duke team is starting to take shape. With nearly an all-new coaching staff, players from freshmen to graduates are seriously feeling what the coming year and Elkos tenure could look like.

In the first few days of training, which started Friday morning, players and coaches were excited to get to work. It’s unlikely that anyone is more excited for the coming weeks than Elko, who walked into his first press conference of the new season with the same energy he’s poured into the program since day one.

It must be football season, he exclaimed, grinning.

Culture has been the theme so far since Elkos’ arrival last December, following a dismal last season under head coach David Cutcliffe. Speaking after first practice, junior defensive tackle DeWayne Carter said, we left everything in the past.

With tough decisions ahead of him no bigger than deciding the still-up quarterback job, Elko can enjoy his first few weeks as the head coach of a collegiate program.

I am truly blessed with this group. I think this group has taken over our posts, they’ve seen what we’re trying to do, how we want to do things. So a lot of them have changed, the first year head coach said. We still have a way of getting into details and basics and things like that, but I come to work and come to practice every day excited to be around these guys.

That excitement of getting on the field, Elko says, has helped the team move forward in their practice regimen. And part of providing that energy is the responsibility of Elko and his staff.

After the Blue Devils’ nine-loss season that saw them go winless in the ACC, it seemed all too easy to lose that energy, but Elko, 45, thinks he can rekindle that zeal in his players.

In the training sessions so far, you can see players jumping on the sidelines and cheering on their teammates after a big game, be it an interception, long completion or broken tackle. The energy is there, even in the scorching August heat that turns the training ground, tucked behind the scoreboard at Wallace Wade Stadium, into a sauna.

If you go out and play 25 games for the opener, then you’re ready for the first game, Elko said, praising his teams for a game-like competition.

However, as a head coach and no longer a defensive coordinator, a post Elko has held for the past 16 seasons, she gets to see all the bad in those big plays. A bad throw, blown cover or a missed tackle, Elko sees it all. Fortunately for him, there is still time to work.

For Elko and the team, he says roles and position battles have all started with a clean slate, whether they’re actual freshmen or experienced leaders. To help develop the roster and determine who will line up on September 2, the coaching staff has a detailed plan for each workout with a clear goal and specific goals for each role.

In regards to the quarterback situation, both sophomores Riley Leonard and Jordan Moore have taken starter reps, and Elko suggested Friday that the runway battle was solely between the two, unsurprisingly, the only two quarterbacks on the roster snapped a photo. in a Blue Devil uniform.

we have [given starter reps] as best we can to give them both the same chance to see how this thing plays out, Elko said.

As several other positional battles take shape, experienced leaders are establishing their presence on and off the pitch and Elkos’ coaching staff continues to develop relationships with the players, watching this group of young men become a team.

But for now, the X’s and Os are scrubbed clean, ready for a fresh start.

Receive The Chronicle straight to your inbox

Sign up for our weekly newsletter. Cancel at any time.

Micah Hurewitz is a Trinity junior and sports editor of the 118th volume of The Chronicle.