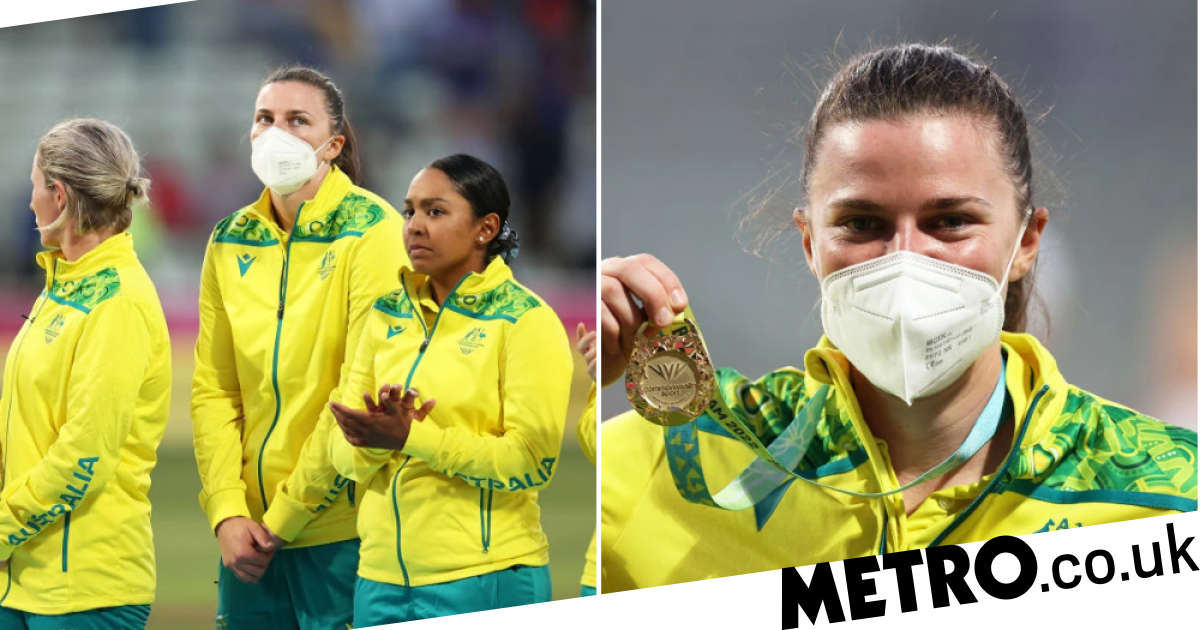 The Australian cricket team is facing a backlash after winning gold at the Commonwealth Games with a player who tested positive for Covid-19 just hours before the match started.

Star all-rounder Tahlia McGrath posted a positive Covid result after experiencing mild symptoms but was still allowed to play in the gold medal match against India in Edgbaston, Birmingham on Sunday.

McGrath isolated from her teammates and wore a protective facemask as she waited to hit, but removed it before taking the field, where she scored two from four balls.

The 26-year-old then bowled two overs and flied out as she raised her hands to warn her teammates not to celebrate with her.

Australia took a narrow nine-run victory over India to become Commonwealth Games champions and McGrath was pictured both masked and unmasked during the celebrations.

Australian bowler Megan Schutt, who took two wickets, said afterwards: if we get Covid, so be it.

The decision to bring a cricketer to his feet with Covid has sparked controversy, not only because it is a potential health risk, but also because Australia is one of the strictest countries in terms of Covid regulations.

Australia took tough measures against lockdowns during the pandemic and even Novak Djokovic, the number one in the tennis world, expelled because of his vaccination status.

If the Commonwealth Games final had taken place in Australia, McGrath would have had to withdraw and isolate for seven days.

With the UK government insisting that self-isolation rules are advisory only, the Birmingham Games were open to taking Covid-positive athletes and said they would assess on a case-by-case basis.

A statement from Commonwealth Games Australia said McGrath presented to team management on Sunday with mild symptoms and then returned the positive test.

She was named in the starting eleven at the toss and the International Cricket Council (ICC) approved her entry into the final.

In consultation with the CGF and the ICC, the medical staff of CGA and Cricket Australia have implemented a series of comprehensive protocols that will be followed during the game and for post-match activities to minimize the risk of transmission to all players and officials.

But the Indian cricket team was reportedly confused and somewhat concerned after McGrath was allowed to play, especially as there were reports that they weren’t told about the test result until after the toss, leading to a brief delay.

Many Indian sports commentators were outraged by the ruling, with Bloomberg News reporter Akshat Rathi describing it as a dereliction of duty.

He said on Twitter: I don’t understand how the rules allow Tahlia McGrath to play a cricket match on the pitch after she tested positive for Covid-19. Dereliction of duty by authorities.

Sports reporter Naveen Sharma said it was a shameless decision by Australia, adding on social media: Australians always preach about right or wrong, but they forget everything when it comes to them.

But Australian batter Beth Mooney jumped into her teammate’s defense and said the right decision had been made.

It’s a real shame that in top sport you are publicly shamed for having Covid, when here probably 90% of the people in this room have it now, she said.

Nobody tests, nobody does anything. It’s just a shame she couldn’t celebrate with us, but at the same time I think the right decision was made to let her play. Hopefully people aren’t too mad about it.

Australia is the dominant force in women’s cricket, adding the Commonwealth Games to their T20 and 50-over World Cup victories by beating India at Edgbaston.

Host nation England failed to win a medal after losing to India in the semi-final and New Zealand in the bronze medal match.

Veteran England bowler Katherine Brunt said: It felt like the whole country was behind us. We were just sad that we let them down. We couldn’t quite do it.

LAKE : Decathlete has an awkward accident when he has to cover his genitals during the race

For more stories like this, check out our sports page.

Follow Metro Sport for the latest news about
Facebook,TwitterandInstagram.