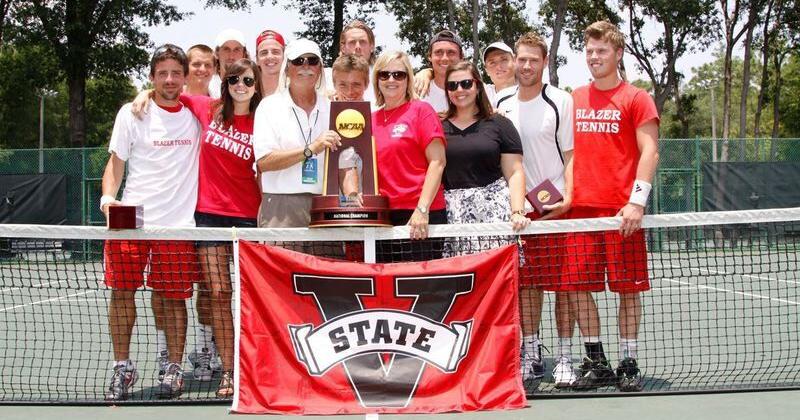 Led by former Blazers Shaq Kirtane and Derrick Racine, the famed duo will take on everyone in one game. The rules of the game are that each person serves once until a team has won. Any team that defeats Kirtane and Racine gets a lifetime of bragging rights.

Kirtane has had an outstanding coaching career as he enters his ninth season as the Associate Head Women’s Tennis Coach at Mississippi State. There, he helped the team to a 99-72 overall, including five post-season NCAA appearances, and the team has finished in the top 50 of the ITA final standings five times.

Prior to Mississippi State, Kirtane was the head coach at Lindsey Wilson College for the men’s and women’s teams from 2012-2014, where he helped lead the program to consecutive national semifinal appearances for the women’s program and the men’s national quarterfinals. . He was named Mid-South Conference Coach of the Year in 2014.

Kirtane began his career as a head coach at the University of Northern Iowa from 2002-2012. There he was 129-88 in ten seasons and the 129 wins are the most in program history at UNI. He was named Missouri Valley Coach of the Year in 2011.

Before taking over the program at UNI, Kirtane was the Men’s and Women’s Blazers Assistant Coach for Hansen from 1998-2000. In 2000, the men’s team reached fourth place in the country, while the women’s team won the conference title and reached the semifinals of the NCAA Division II Championship. A year later, the men’s program reached No. 2 in the country, winning its second consecutive title at the conference.

While playing for the Blazers, Kirtane earned All-America honors and was part of a team that finished fourth nationally in 1994-95 and participated in the NCAA Division II National Tournament. The Blazers won the Gulf South Conference title in 1995 and Kirtane was named VSU’s Most Valuable Player in 1996. After that, Kirtane was inducted into the Valdosta State Athletics Hall of Fame in 2005.

Racine served as the head tennis coach for men and women at the University of West Florida for 22 years, where he had great success. Racine has earned seven Division II/Wilson ITA Men’s Tennis National Coach of the Year honors and the 2012 ITA Women’s National Coach of the Year. He had led the Argo men’s team to four national titles and won 13 GSC men’s titles. In the women’s race, Racine had coached the Argos to 16 GSC titles, the most of any program.

He was an assistant coach at Valdosta State from 1993-95. He graduated from VSU in 1988 and also played at Abraham Baldwin State College and was ranked nationally in both singles and doubles at VSU earning All-America honors.

On April 15, 2022, after a women’s game against Flagler College, VSU Athletics celebrated Hansen’s 50 years of coaching and a storied career. Tennis I had led the red and black tennis teams to two national titles, three runner-up finishes and three top four finishes. He has led the teams to a combined 24 titles in the South Atlantic and Gulf South conference, including a GSC-best 14 men’s championships and four women’s titles.

Hansen has been named Coach of the Year 22 times at both conferences and won the award 13 times in the GSC for the men and five times for the women. He last earned the GSC Men’s Coach of the Year accolade in 2021 when he led the Blazers to an undefeated league campaign and their third consecutive league title.

As well as being honored for his achievements, Hansen ensures that his players perform at a high level and also receive personal recognition. He has coached more than 65 All-America players and has seen an athlete take All-Gulf South Conference honors 185 times, including 93 men and 92 women.

Thanks to Hansen, Valdosta State has won GSC Player of the Year 24 times, 14 men and 10 women. Leo Blay even won the honor twice, following on from Philip Pakebusch, who won the GSC Player of the Year award for the second time in a row in 2011. award under the tutelage of Hansen. Bea Morales last won the honor for the women in 2015, while former Blazer Florian Simbozel was the last for the men in 2018.

Hansen’s athletes have also earned a number of individual awards nationally, as Pakebusch and Christian Hansen were named ITA Senior Players of the Year in 2011 and 2012, while Eduardo Rincon won the Arthur Ashe Award in 2004. VSU Athletic Hall of Fame honoree, earned ITA Rookie of the Year honors in 2007.

With all the coaching achievements Hansen has amassed, his coaching remains sharper than ever as VSU recently wrapped up one of its most impressive seasons to date in 2011. The men’s team took Valdosta State’s fifth NCAA National Championship and second for men’s tennis. The team compiled an outstanding 21-1 record with the only loss to national power Armstrong Atlantic State. Valdosta State was undefeated in conference play and never fell below second in the ITA national ranking.

The event is free and open to the public and comes out to celebrate 50 years of coaching from John Hansen and to showcase your skills against two outstanding former Blazers.